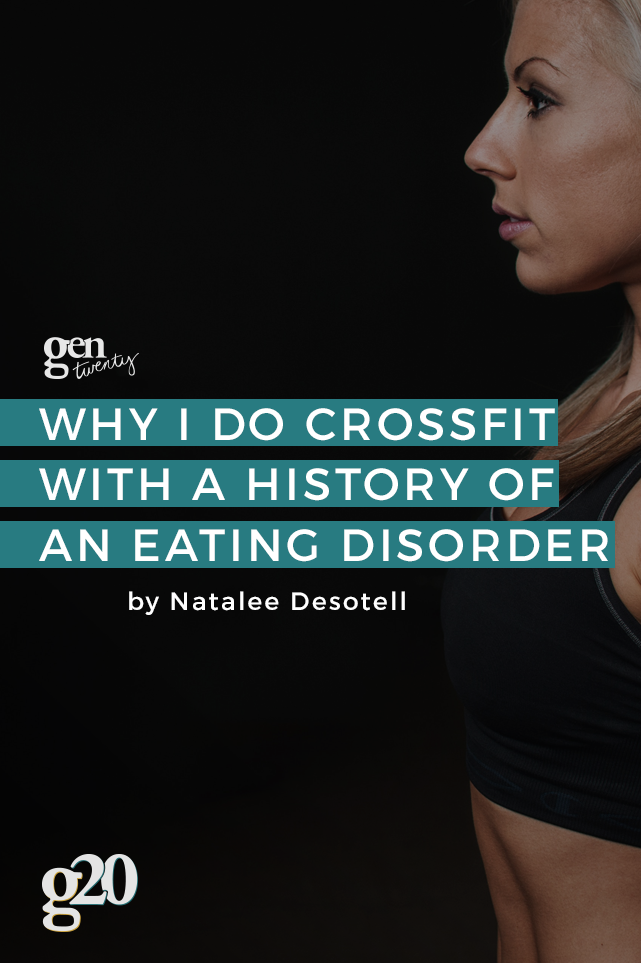 How will you know if someone’s a Crossfitter? Don’t worry, they’ll tell you.

After hearing about 1,392 too many anecdotes about Crossfit (sorry mom, love you), my interest was finally piqued. I wanted to start a workout routine that was more effective than an hour on the StairClimber. I wondered, is a Crossfit gym an acceptable space for a chubby, awkward lady to test her limits? Or will I be laughed out of there immediately?

The first day I meekly stepped inside for what they call a “no sweat introduction.” The owner gave me the quick rundown of what the gym is all about and then she also got a lot of info out of me.

I told her some things I wouldn’t usually tell a complete stranger, like the fact that I have detested my own body since the third grade and that I had had an eating disorder, on and off, for about a decade. This article isn’t really about my disordered past, but let’s get it out of the way:

There was a time when I looked like someone who would do Crossfit, but I didn’t. That’s when I was at my most sick in 2010 and 2011. I counted the calories in gum. Weighing myself was a hobby. I enjoyed every moment of the control.

Now, I look like someone who eats Oreos by the pack, but I do Crossfit. I stick closely to Michael Pollan’s advice: “Eat food, not too much, mostly plants.”

I told her all of this because I was scared. Not of the deadlifts or crunches or burpees (well, kinda the burpees), but I was afraid of going berserk with the numbers and measurements.

I was afraid I’d catch that bug again, which would have me monitoring every morsel I eat and sacrificing everything to hit the next goal number — swapping a shrinking number on a scale for a growing number of kilograms on a plate. I knew it could easily happen and that I would secretly love if it did. It hasn’t happened.

I’ve learned a lot at Crossfit, like how to use a rowing machine with proper form, how to launch over one hundred pounds over my head and hold it there, and how undeniably cool it feels to chalk your hands like you’re a frickin’ Olympian.

I’ve also learned a ton about what it takes to do Crossfit with a history of an eating disorder. Here’s how I’m keeping it together:

At Crossfit, numbers rule the day. People are recording their max lifts, their record times, and their number of reps. It’s all in good fun! The end of each workout is marked by a number written on the whiteboard, your results for the day. Those numbers are written next to your name for all to see. It would be easy to take those numbers very seriously.

As far as I can tell, the numbers are unavoidable. It’s kinda their whole thing at Crossfit, but it doesn’t have to be yours. If you don’t record that number on your phone or in a notebook, it’s gone from your life by the time you leave the gym. It’s soon erased from the whiteboard and never considered again.

Sometimes I do notice the number, but I’ve gotten to a point where I can laugh it off when my number is the worst of the group.

It goes the other way, too. When I get a high-five for hitting a personal record, I can pat myself on the back for a second but not feel an urge to immediately outdo myself. My weight-obsessed self could not have said the same.

2. Don’t compare yourself to others.

If I needed to assemble a team of super humans, I’d look no further than my local Crossfit gym. With so many amazing people around, there’s significant fodder for negative self-talk.

This was tough for me at first. It made me sad when I was the only one in the class who needed to do a scaled-down version of a push up or was out of breath after five burpees.

Somehow, those feelings washed away quickly. No one made me feel bad for being the slowest in class, nor for doing a watered-down version of a tougher workout. They high-fived me just the same. As long as I’m pushing myself, that’s all that matters. I’m not just saying that; it’s truly how the gym made me feel.

3. A sense of humor is important.

You might not be able to get abs from laughter, but you can laugh while you’re working on your abs. There will be moments when you are the most out of shape in the room by a large margin or days when your muscles cannot remember the mechanics of a proper kettle-bell swing.

You will embarrass yourself. With the right attitude, it will be hilarious.

4. Nutrition is complicated and it’s different for everyone.

I hear Crossfit gyms tend to advocate for a Paleo diet, but I haven’t personally experienced that at my gym. If you’re considering joining a gym and you have a history of disordered eating, I’d suggest eschewing the nutrition advice.

My take? Any diet with a trademarked name ought to be avoided.

If you fuel a body properly and use it to pick up heavy things, it gets to work helping you get better at picking up even heavier things. Way to be, body.

Being surrounded by strong people helped me think differently about what bodies are for and what my ideal one is like. I may never reach a point where I truly love what I look like, but every moment I’m focused on what my body can do is a moment I’m not fixated on the size of my upper arms. Progress.

My careful entry into the realm of Crossfit has been a positive one, despite my original fears. It is possible to navigate the gym’s quirks without delving a too deeply or taking each failure or success too seriously. If you leave the gym with sweat on your back and no injuries, you did it perfectly.

It's critical that you take care of yourself and that means it's OK to use your PTO for mental health...