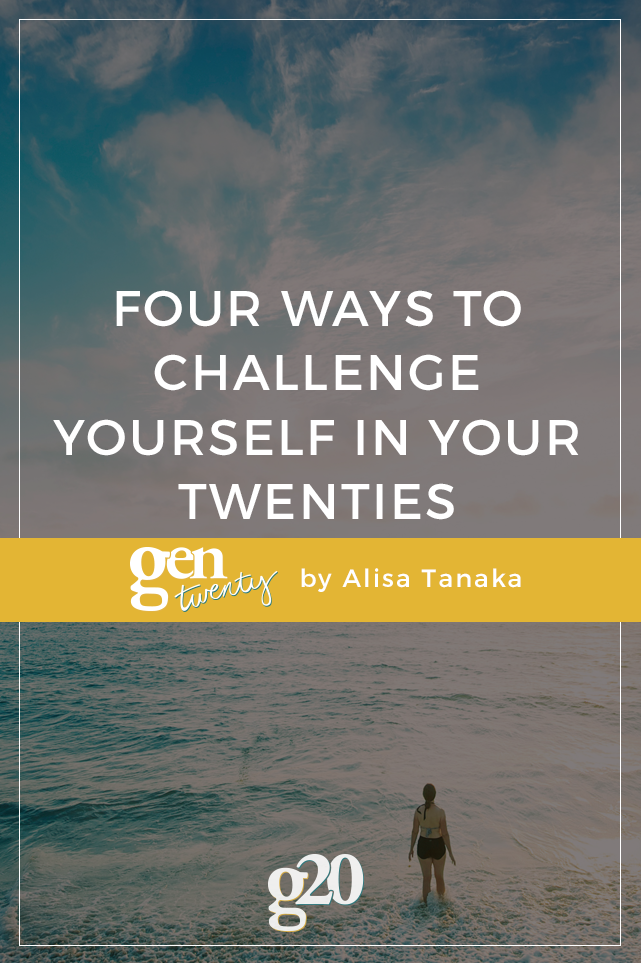 There is a reason that the quote, “A ship at harbor is safe, but that’s not what ships are for,” is so popular. Being safe does not mean that you will grow as a person. Challenging yourself may sound like the last thing on earth you’d want to do, but either way, you will grow as a result.

Here are some of the ways I recommend you challenge yourselves in your twenties:

1. Take Steps To Overcome A Fear

There is a reason why the phrase, “Everything you want is on the other side of fear,” has stuck around for as long as it has. There is a very specific reason why I chose the words “take steps to overcome” a fear instead of “get over” a fear.

Yes, our twenties are a great time to make mistakes and experiment, but the way we say things can also have a lasting impact, especially when we’re young. Being told to “just get over it” after I expressed my fears or shared my feelings in any sort of vulnerable way did not make my fears any less real or motivate me in any way to move forward.

It takes time to develop a fear, and by the same token, it takes time to overcome a fear; your fears are valid, and it’s perfectly fine to take the time you need at your own pace, especially if you can afford to do so.

In my case, I developed a fear of driving after a few traumatic experiences in a car. Even after I got my driver’s license, I still dealt with anxiety whenever I got behind the wheel. I still deal with it occasionally, but I am slowly becoming more and more accustomed to driving on my own.

Taking steps to overcoming a fear, whatever that fear may be, is a definite way to challenge yourself in your twenties. Overcoming a fear is a great way to gradually build confidence in yourself and your abilities.

2. Learn A New Language (Or Improve The Ones You Already Know)

I’ve always had a thing for learning new languages, maybe because of my bilingual upbringing and the fact that my first second language was Spanish. It was exhilarating to be able to communicate with people from other cultures; over time many of the people I met became comfortable enough to share things with me that they later confided would have been difficult to express in English because English was their second language.

It is also scientifically proven that being bilingual offers multiple benefits. Personally I think that the idea of making friends from around the world is pretty cool. Not to mention that being able to communicate in multiple languages is a valuable skill that can help make you a prime candidate for jobs.

If you can’t afford (or find the time) to take a class at a local community college, there are plenty of other ways to challenge yourself by learning a new language. I’ve been slowly getting back into the habit of using Duolingo to brush up on my Spanish skills. I recently decided to challenge myself by using the app in order to try to learn both basic French and basic Russian for fun.

There are plenty of groups (that you can find pretty easily through a simple Google search) that host language gatherings. One of the reasons my Japanese improved so quickly was because I was able to make a simple arrangement with some of the native Japanese speakers I met: I would speak to them in English in order to help them improve their language skills while they were studying in the United States, and in exchange, they would speak to me in Japanese in order to help me improve my language skills.

Maybe the language you want to learn isn’t Japanese, but there are plenty of foreign language speakers who come to the US with the hope of studying English who can help you learn a new language in return.

3. Befriend Someone From A Different Cultural or Political Background

Befriending someone from a different cultural or political background gives you the opportunity to learn about a new culture and open your eyes to a different viewpoint, which expands your worldview as a result.

My job allowed these students to share parts of their culture with me. The more they shared, the more questions I asked out of simple curiosity, the more my preconceived notions of that particular region were dispelled. Their experiences challenged what I thought I knew, and I grew as a person as a result.

Working out is a great way to exercise self-care, and it’s important for your to maintain your physical and mental health. However, it’s also easy to get stuck in what many would call a fitness plateau, especially if you perform the same exercises (or activities) over and over again.

Changing up your routine by trying a new physical activity challenges your muscles as well as your brain. I personally love mixing up my fitness routine because it constantly challenges me. I tend to mix up my routine with weightlifting, boxing, yoga, figure skating, jump rope, and bodyweight HIIT workouts. Finding a workout routine that you like ensures that you’re never bored.

It can be tempting to become complacent in your twenties, especially if you’ve established a comfortable routine. However, if we don’t push ourselves outside of our comfort zones, we will never grow.

Which Self-Development Book Should You Read? Take the Quiz!

Which self-development book should you read? Take our quiz to find out!