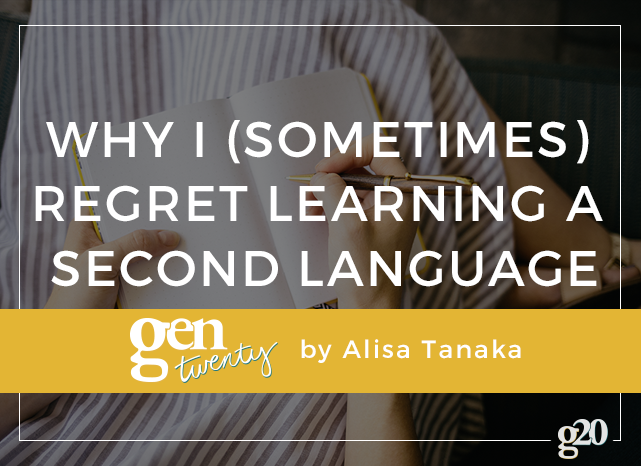 I don’t deny that there are positives to learning a second language. It lets you communicate with people from different cultures, and delays dementia symptoms.

Being bilingual allows you to begin to understand a culture that is vastly different from the one you grew up in. Other studies show that a multilingual brain is more flexible and more adept at dealing with conflict.

Growing up with a mother from a country where you are taught to go along with the group rather than stand out equally confused and elated me. I loved being given the opportunity to experience new things, but sometimes my confusion outweighed the benefits of knowing a second language.

From my personal experiences, here is why I sometimes regret learning a second language:

It (Sometimes) Made Me Uncomfortable

Did they really need to come to me for a translation for every little word they came across instead of picking up a dictionary? There was more to my personality than that.

When you’re befriending or approaching someone who knows multiple languages, try to get to know them. It’s fine to use your curiosity about their abilities as an ice breaker, but don’t use it as a touchstone. Ask them questions about who they are. I guarantee you that there are more interesting things about them other than the fact that they are multilingual. Start with the basics, and build a conversation with them from there in order to build a rapport so they can feel like a person instead of an object.

It (Sometimes) Makes Me Conform

When I was eight, I didn’t speak much Japanese beyond the basic greetings. In fact, I always had a resident translator, which meant that I didn’t need to worry much. As my Japanese got better over the next seven years, however, I became more and more aware of the cultural stereotypes that were rampant, not just in Japan, but around the world.

I felt the need to conform in order to fly under the radar because I didn’t look like a Barbie. In order to conform, I bought clothes that had nonsensical English words printed on them, bought jewelry and shoes I didn’t want, and pretended to like things that I didn’t, just to fit in.

I was afraid to express the parts of my personality that made me unique: I was (and still am) a sarcastic, monochrome-loving individual who prefers jeans over dresses, but all I saw were bubbly girls who loved pink and heels and hated pants.

Expressing yourself in a second language is never easy, but rather than dealing with the exhaustion that comes with maintaining a façade, I’d suggest being selective about the friendships you choose.

Start by making friends with people who have a variety of interests, or people who have had similar backgrounds. This can help to create the foundation for a relationship that goes beyond someone’s ability to be a walking and talking language dictionary. It also ensures that you’ll have varied conversations rather than talking about the same thing over and over again.

Having friends who appreciate you for who you are gives you the freedom to express yourself without having to water yourself down.

It (Sometimes) Gives Me A Label

I remember one night as I was waiting for the bus, a few exchange students asked me a question about the bus schedule, which I answered in Japanese. Another exchange student (who I didn’t know at that point) overheard me, and proceeded to yell, in Japanese, “It’s a Japanese person!” very loudly.

I rolled my eyes and glared at him, although I couldn’t see him over the crowd.

Perhaps what bothers me the most about being able to speak Japanese (or any language other than your native tongue) is the fact that the people around you will make judgments about who you are as a person on the basis of nothing but your appearance and your language abilities.

I could have corrected this person. I knew that I was more than my ability. I could have challenged his stereotypes about Americans and the Japanese community within my university, but I knew that how I chose to react and how I interacted with his community after the incident would say more than anything I could have said that night.

READ MORE  How To Embrace Your Awkward Self

You can’t control how others perceive you, but you can control what you do and how you do it. Instead of responding to his claim with an impassioned chat, I spent more time with my American friends, and less time with the Japanese community. Instead of volunteering for everything related to this group of students and going out of my way to help them, I prioritized my educational responsibilities.

Establishing healthy boundaries and engaging in other activities with different people can help to encourage others to reconsider their perceptions of who you are. Labels are often uncomfortable, but you can make conscious choices on your part to encourage others to challenge the thinking of others by showing rather than telling.

I don’t regret learning the languages I have because they have given me an incredible tool and broadened my horizons, but like anything in life, there are pros and cons to everything. However, I am learning that you have the power to dictate that choice for yourself.

Previous Post: « How To Have Fun at a Wedding Without a Date
Next Post: Seven Lesser-Known Podcasts That Rule »

How To Have Fun at a Wedding Without a Date

Going to a wedding without a date can leave you feeling very single. But fret not, you can still have...