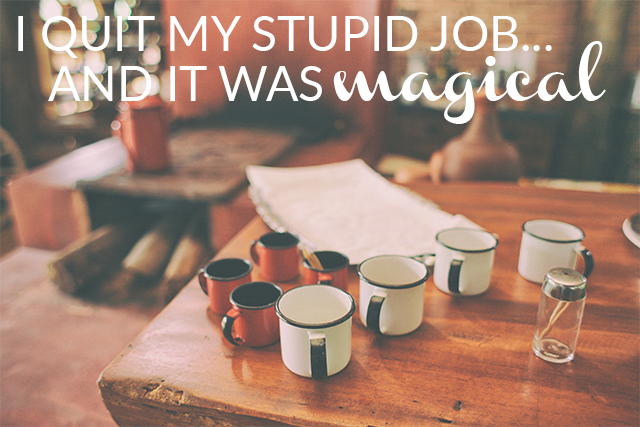 I’m pretty sure that anything can be tolerated, up to a point.  Especially when you lie to yourself over and over again, insisting that something isn’t really that bad.  She’s not that bad of a friend, you think.  This neighborhood isn’t that bad, you tell yourself.

This job isn’t that horrible.

But you’re wrong.  I was wrong .  I told myself every day that my job wasn’t that bad, it wasn’t too horrible. I fed myself every lie and excuse I could think of–anything to convince myself to show up for my next shift.  My handsome man would try to make me feel better every night after I came home from closing up the liquor store.  I’d rip my shoes off and curl up in a ball on the floor and sob while complaining about the same damn things.

I couldn’t remember the last time I’d been in a decent mood.  I worked in the evenings, so I’d wake up in the morning and dread the on-coming afternoon.  “I can’t do anything this morning,” I’d say.  “I have to be at work by 4.”  In reality this left me a solid 7 hours to do whatever, but when you hate your job and spend any available minute counting down your remaining moments of freedom… you have no time.

But hear me now–I quit my stupid job.

And it was magical.

I found a barista gig and figured that’d be my morning job.  I’d stay at the liquor store until I found something to replace it.

Hints of ideas that maybe the barista job alone would be enough crept into my mind.  What if I just quit the liquor store?  What if I said, “Fuck this shit!” and walked out?  I could slash my creepy, sex-obsessed co-worker’s tires and set his messenger bag on fire.  I could take a bottle of cheap vodka and smack the next 50-year-old pervert to call me baby or sweetie right in the mouth.  I could push over a liquor display and leave without looking back, like a tough guy in an action movie walking away from an explosion.

I took the dignified way out though.  I gave my two week’s notice and finished my time.  On my last day I got all nice and dressed up with a new shirt and red lipstick; I wanted to be remembered for how put-together I could be.  I said goodbye to two people, maybe.  I left the building and climbed into my handsome man’s car.  Peace out, bitches.  Or maybe I flipped the place off.  I don’t exactly remember.

A spectacular thing has happened since leaving though.  My mood is better than it’s been in ages.  I don’t cry over stupid stuff every other night.  I don’t have unexpected fits of rage on an almost daily basis.  I have to wake up early to open the coffee shop (and I am by no means a natural morning person), but I get more sleep in general.  My sleep quality has improved too.

I’m working more hours at my barista job, yet it doesn’t feel like it.  I get paid more.  I have female co-workers.  I haven’t been hit on once.  When I come home and my handsome man asks how work was, I say it was good.

This is truly revolutionary.

Of course, that stupid job was good for a few things.  It did give me a steady paycheck and something to put on a resume.  It also gave me the chance to learn about myself.  I sincerely believe that every job–no matter how miserable or ridiculous–teaches you something about yourself.  Some previously undiscovered facet of your being is revealed during each bout of employment.

In the liquor store’s case, I learned that I’m kind of a bad-ass.  I can cope with situations and get through it even when I want nothing more than to scream and throw a fit.  I can deal with rude, offensive people.  I’ve been burdened with glorious sass, and I’m not afraid to use it.  When necessary, I can sum up limitless supplies of fiery willpower.  I know now that I am a Khaleesi, and you will not talk to me in a way that is disrespectful.

While the self-discovery is irreplaceable, the fact remains: I hated that job.  And nobody should be stuck in a setting that brings more grief and soul-sucking unhappiness than anything.  Get gone from that place and become re-acquainted with your inner magic instead.

Have you ever quit you job? How did it go?

Life as an Introvert in an Extrovert’s World

Because most of the world is made of extroverts, the world seems to be made for them.