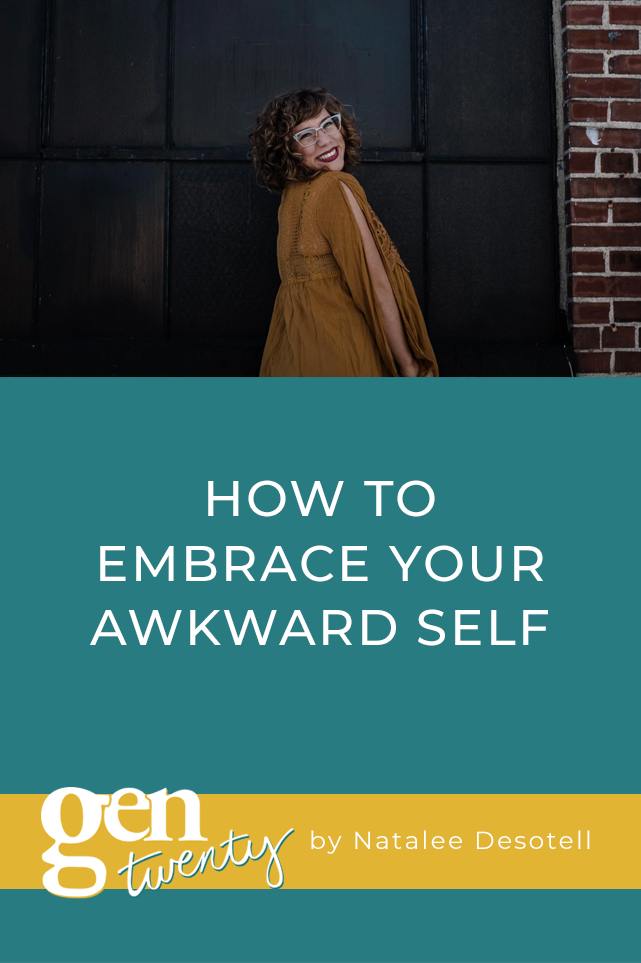 If you’ve ever waved at someone across the room only to find they were waving at the person behind you or if you’ve managed to trip over absolutely nothing, then you might consider yourself the epitome of awkwardness.

However, the fact that there’s a popular MTV show titled Awkward. and a well-known meme called “Socially Awkward Penguin” indicates that these minor embarrassing moments are familiar to nearly everyone.  It may seem like awkwardness is just a fact of life, but there are many small ways to prevent it.

Learn How to Embrace Your Awkward Self!

A lot of times, awkwardness comes in the form of the infamous awkward silence.  When you find yourself stuck in one, you might feel a pressure to say something witty to break the ice.  It helps to remember that it takes two to keep a conversation going; the burden isn’t all yours and the other person likely feels the same pressure.

Often, it’s easy to break the silence simply by drawing from details you know about their life. For example:

If you’re a good listener and you remember these details, you’ll show that you’re a caring friend and you’ll also be able to beat uncomfortable silences.

Although it’s also important to learn how to tolerate silence.  Conversation isn’t necessary all the time; sometimes being able to sit in silence with another person is a good sign that you have a comfortable relationship.

PSA: Silence in conversation is OK.

Make yourself open to new introductions.

Other times, awkwardness can refer to being unsure of what to do with yourself at a social gathering.  If you’re at a party and suddenly find yourself outside all the conversations, you might feel out of place.

Rather than standing in the corner with your eyes glued to your phone, take this opportunity to make yourself useful.  Ask people if they need a drink refill, help clean up a mess, or take care of a person who may have had a bit too much to drink.

Keeping yourself busy will ease the tension of feeling awkward and you’ll eventually make your way into another conversation.  If most of the people at the party are strangers to you, it’s also perfectly acceptable to introduce yourself.

Ask how they know the host, where they work, or give them a sincere compliment.  While it’s easy to feel awkward at social gatherings, there are a lot of opportunities to meet new people and show that you’re a helpful, caring person.

Be friendly and polite.

Awkwardness can also rear its head in everyday interactions with strangers.  We’ve all had the experience of holding a door for someone who turned out to be a little too far away or struggled to hold a conversation with a hairstylist.

It helps to remember that you may never see this stranger again, so who cares if you come off as awkward?  But, until mute barista robots are invented, it’s important to get used to the small talk involved in normal interactions.

In my experience, the most important thing is to be friendly. Say hello, smile, and don’t forget those thank-yous.

It’s also helpful to remember a few topics that you can discuss with virtually anyone.  I often ask people about their plans for the weekend, how their day is going, or comment on the weather if I need to resort to such a cliché.

Even if you’re never completely comfortable talking with strangers, pretending like you are is a useful skill that’s worth practicing.  As for holding the door open for a person who’s too far away, you’ll just have to learn to let that one that roll off your back.

Lastly, and and perhaps most importantly, it’s good to learn how to laugh at yourself.  We all have uncomfortable moments that we think are utterly horrifying, but chances are, you’re the only one who even remembers that time you slipped on the ice in front of a bus full of people.

Once you learn to stop taking yourself too seriously, awkwardness will cease to seem like a major issue.

That being said, there’s a difference between social awkwardness and more serious issues like social anxiety or Asperger’s syndrome.  These tips may alleviate these disorders to some degree, but they often require more of an intervention.  If you feel as though social awkwardness is greatly affecting your daily life and relationships, you may want to speak to a medical professional.

7 Tips To Eat Healthy on the Cheap

While ramen noodles might have been a staple during your college years, it’s about that time to branch out and...