Ever wonder what it was like to live in the Show Me State? Is the 24th state one of the best places to live in the United States? Well, I’ve got the pros and cons of living in Missouri so you don’t have to wonder any longer.

Disclaimer: I do not live in the state of Missouri. However, one of my really good friends grew up there, making her a perfect person to share both the good and the bad aspects of living there.

The Pros and Cons of Living in Missouri

What are some of the good parts of living in Missouri? Well, every great place to live should have culture, arts, a lively downtown area and affordable places to live. The good news? Missouri has much of that!

In Columbia alone, there are usually no less than three live shows to choose from on any given night. So many venues, both indoor and outdoor. Kansas City and St. Louis have even more options.

These three cities all have a great metro area that still can have a small town vibe, which a lot of people love because the top big cities in the U.S (like New York or Los Angeles) can be more expensive, and we love a low cost of living in this economy!

There are also many amazing ways to be inspired as a creative–whether you want to spend time at an art museum or around the natural beauty of the state.

Heck, the lake of the Ozarks is the Midwest’s premier lake resort destination and the Missouri river passes by St. Louis and Kansas City.

A yearly week-long documentary film festival in Columbia, premiering a wide array of documentaries, exclusive parties, live music before/after each film, beautiful displays of art – probably my most favorite event in Missouri, I could talk about it for hours. 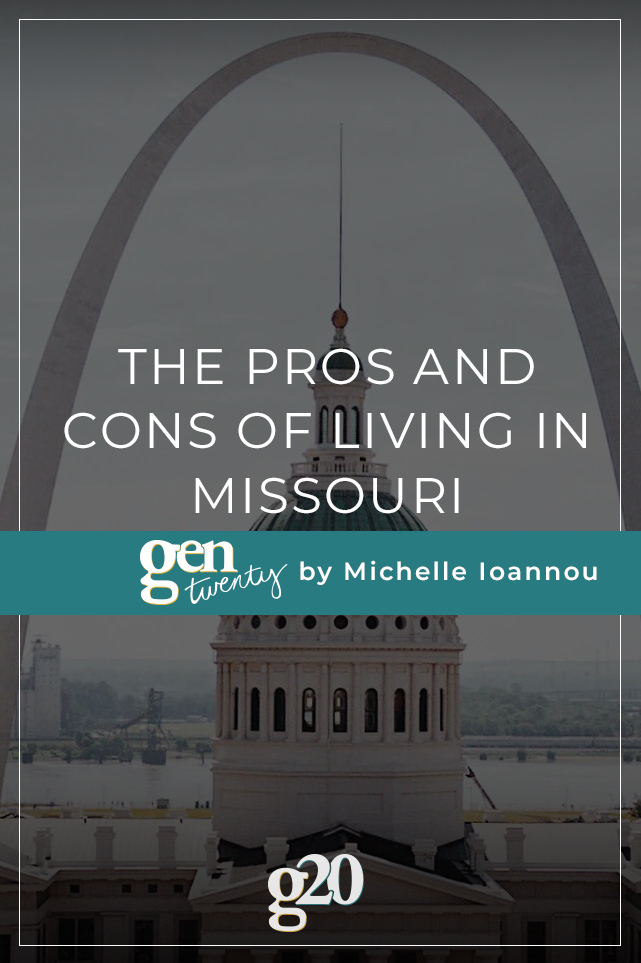 There are many rental houses as well as apartments usually have outdoor space allotted to them, yards and pools are very common, driveways, garages are also extremely common, even in apartment/condo complexes.

A Sense of Community

You feel a sense of community where you live – whether it’s rural or “in town.” No matter if you’re in a big city, small city, or anywhere in between, there are friendly people everywhere in MO.

In the words of my friend, “I am from a rural area, but our distant neighbors will always stop in if they see one of us out in the yard to say hello and catch up on life. Everyone usually knows everyone directly or indirectly.” So A+ to Missouri residents for their kindness!

Many Local Breweries and Wineries

There is a wide variety of accredited colleges and universities—both private and public schools. College sports are also huge here, especially the University of Missouri.

The in-between, depending on your political views:

Now, what are some of the negatives? To be fair, these are cons of any city, not just in a major city but in the small cities, the towns, and for a state over all.

St. Louis in particular recorded highest homicide rate in 50 years in 2020; 2020 was worst ever year for gun violence in Missouri. There is also gang activity and gang violence/territorial groupings. Between the violent crimes, property crimes, and gang activities, the crime rate is definitely something to be aware of.

Unless you are in St. Louis or Kansas City, there are less career and professional growth opportunities. Additionally, there is not a great public transportation and a low minimum wage.

However, the state unemployment rate is 4.3% compared to the national unemployment rate of 5.9% and the top industries in Missouri are aerospace, food processing, chemicals, printing/publishing, electrical equipment and beer, and specifically a growing science and biotechnology field.

Resources Can Be Hard To Find

Resources are difficult to access for those who need them. Many people in rural areas have no access to transportation for doctors visits, financial aid departments, or domestic violence resources.

Overall there are pros and cons of living in Missouri. Is it a place that appeals to you?

5 Lessons I Learned When I Got Engaged Young

5 lessons about relationships from someone who got engaged young.