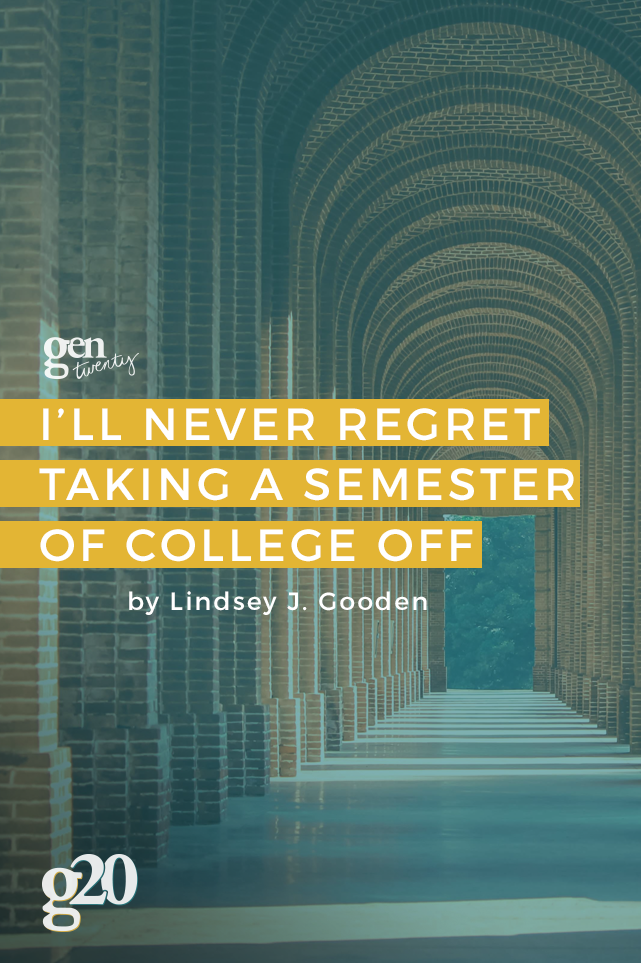 They say the point of going to college is to gain a higher education.  You go to college to learn. Then you graduate with your degree. Then you tackle the real world.

What if I told you the most knowledge-enriching part of my life was the time I decided to take a break from college?

It’s true.  During my senior year–one semester shy of graduating–I decided it was time for a break.  Granted, because of my circumstances I needed more than just one more semester in order to graduate.

However, that time away from school was one of the most eye-opening experiences of my life.

To take a semester off from college is to put yourself first:

For one, I got the opportunity to figure out my priorities.  When you’re in the midst of midterms and group projects with constant deadlines looming in the near future, it can be difficult to remember some things… like what really matters: You and your future.

I got to the point where going to school was distracting me from how much my part-time job was destroying my soul.  Once I stopped going to school and was just working, I realized how much unnecessary stress that job was putting on me.

Part-time jobs you have when you’re 22 shouldn’t be consistently putting you on the verge of a mental breakdown.  I quit that job, found a replacement, and was left feeling less stressed and happier in general.

From there I was able to identify more parts of my life that needed some improvement.  Without constantly worrying about homework and exams, I was able to think more about the things that really mattered to me.

Another important point: the most valuable part of college isn’t always education–it’s the experience.

My college experience was very much interwoven with my first time being independent. I learned how to live on my own. I was given the opportunity to explore my interests. In hokey terms, I had the chance to find myself.

I could have done this without college too, probably. But it wasn’t until I stepped away from the academic environment that I realized that distinction between education and experience.  This wasn’t necessarily life-changing, but it was something I wish I would have considered before.

Related: The Twenty-Something’s Guide to Education versus Experience

Being away from school also opened my eyes to the fact that there are a lot of people who have expectations for you… and they aren’t always forgiving and hunky-dory when you don’t meet those expectations.

For the most part, people I know were very accepting and supportive of my decision to take a break. My friends thought I deserved some time off, my handsome man thought it would give me the chance to recharge and take care of myself, and my grandparents just wanted to know if I’d go back or not.

I talked with other people my age who’d taken a break and said it had really helped them with getting back on track and not becoming burnt out.

A few members of my family were less than supportive though. They were pissed.

The thing about other people’s expectations though is that they’re ridiculous. Too often we allow our lives to be dictated according to the way other people want us to live.

Whatever happened to living your life the way you want to? Why are there people who treat us like shit when we don’t cooperate with the plans they impose upon us?

What I do know is that we should all be accepting and respectful individuals.  We should worry about governing our own lives rather than poo-ing at other people for not doing what we wanted. And we should surround ourselves with the kind, encouraging people who don’t just tolerate our personal decisions, but embrace us for every aspect of our being.

Something I found a bit amusing about skipping a semester was the experiences I had with the “real world.”

This is something every college student dreads. You’re finally graduating and marching off into the post-college world. But you’re filled with anxiety and fear of being eaten alive by someone better or smarter than you.

What have I found in my short time of being a member of the real world? Nobody really cares about college anymore.

Nobody cares for the specifics of your minor and the thrilling details of your senior project. For specialized jobs school is important–but only so that you know what you’re doing.

Honestly, employers care more about the fact that you could commit to something long enough to gain a diploma from it.  Going into the real world is a completely different game.

For me, the most valuable parts of attending college were the opportunities and experiences.

I learned more about myself than I did any topic in a classroom. And I won’t hesitate to encourage others to do the same: take a break, take a breath, and take the time to learn about yourself.

Everything isn't black and white and more often than not, you have to be your own hero.