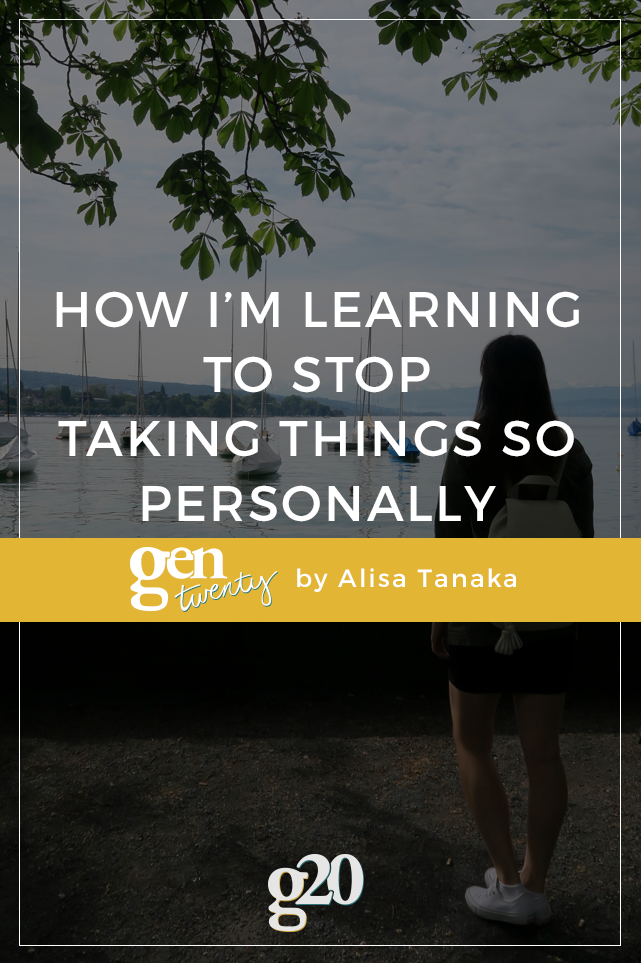 Growing up, I was always told told to “just” stop “taking things so seriously.” To those of you who thought that just saying it would do the trick, it’s easier said than done.

I’m not an expert by any means, but here’s what is starting to work for me:

1. Putting Myself In Other People’s Shoes

One of the things that have helped me is to consider the feelings of another person and consider how the situation may look from their perspective.

For example, I’ve been looking for steady employment for longer than I care to admit. I’m also an introvert, which means that networking and venturing outside of familiar areas can be draining.

My family would (and still do) ask me questions about the progress I’ve been making in my job search. They weren’t consistently nagging me about it, but they did make me feel inferior, especially because they would often tell me stories about how my parents–one of whom is an immigrant–would work multiple jobs at my age, and so on and so forth. To me, it sounded as if they were comparing my career trajectory to their own and indirectly saying that I wasn’t doing enough.

2. Reflect On Other People’s Intentions

Sometimes the way people choose to say things can unintentionally rub you the wrong way.

In the heat of the moment, it can be tough to take a step back and reflect on what someone was trying to do when he or she said something that made you angry. I’m not saying that you should suppress how you feel by any means. If you’re angry about what someone said or how they said it, you have a right to express that emotion in whatever (healthy) way you see fit, but sometimes it’s good to remember that the person who made you angry (or sad or whatever emotion you feel) most likely didn’t go into the conversation with the intention of making you feel angry or sad or however else you felt.

I have more than a few relatives who often say things that rub me the wrong way, regardless of their intention. If there is anything I’ve learned, it’s that the only thing that you can control in these situations is how you react to these things.

If I have the space to, I will most likely excuse myself or burn my excess energy through running or some other physical activity. Putting physical distance between myself and the environment or person that’s bothering has almost always helped me become a little more clear-headed. The more clear-headed I am, the easier it is for me to reflect objectively on the conversation or environment and the intentions behind someone else’s actions, which makes it easier for me to avoid taking things to heart when it’s not necessary.

3. Interacting with People From Different Backgrounds

I’ve said this repeatedly because I genuinely believe it: interacting with people from different backgrounds allows you to expand your worldview. You can learn a lot about a person by learning about their background. It can often give you explanations for why someone will act a certain way or do certain things.

I once worked with a Saudi Arabian exchange student who, along with his classmates, consistently asked me personal questions pertaining to my love life and family. As an American, I wasn’t used to someone coming up to me and asking me such personal questions in a professional work environment, and I felt exceedingly uncomfortable. One of these young men even asked me to marry him after he found out that I was over the age of 18. Seeing as I had no intention of marrying someone I barely knew, I was shocked that this young man had asked me so brazenly.

It wasn’t until I took the time to ask them questions about their culture when I was a little more settled into the position that I began to learn more about the role of women in Saudi Arabian society, and what was common practice for them. Learning more about Saudi Arabia from these native speakers allowed me to understand why this particular young man had asked me the questions he had. This didn’t make me any more comfortable, and I certainly didn’t like it, but understanding why he had asked those questions allowed me to refrain from making a big fuss and blowing interactions like that out of proportion.

I don’t know about you, but when I get pissed off–really pissed off–I sometimes forget to breathe. I turn stoic, and I don’t answer questions that are directed at me very eloquently.

There was one therapist I remember seeing when I was younger who was consistently putting words in my mouth. I didn’t feel like I could get a word in edgewise because he would continually interrupt me without allowing me to finish explaining how I felt.

When you’re angry, it can be hard to remember to breathe and calm yourself down. It’s easy to get wrapped up in the way people are saying things or the things in your environment that trigger you, and it’s equally as easy to let your emotions take you in a downward spiral.

Taking a deep breath at regular intervals can help. YouTube has plenty of videos for breathing exercises. There are also plenty of other activities that you can try that can help you calm down and clear your head. Utilize whatever works best for you. I don’t care if that’s yoga, meditating, or playing guitar.

It’s good to take some things personally, of course, but sometimes it’s healthier just to let go. Easier said than done, but engaging in these behaviors will hopefully help.

How To Rock Your Performance Review

Learn how to prove to your boss that you deserve that raise or promotion!