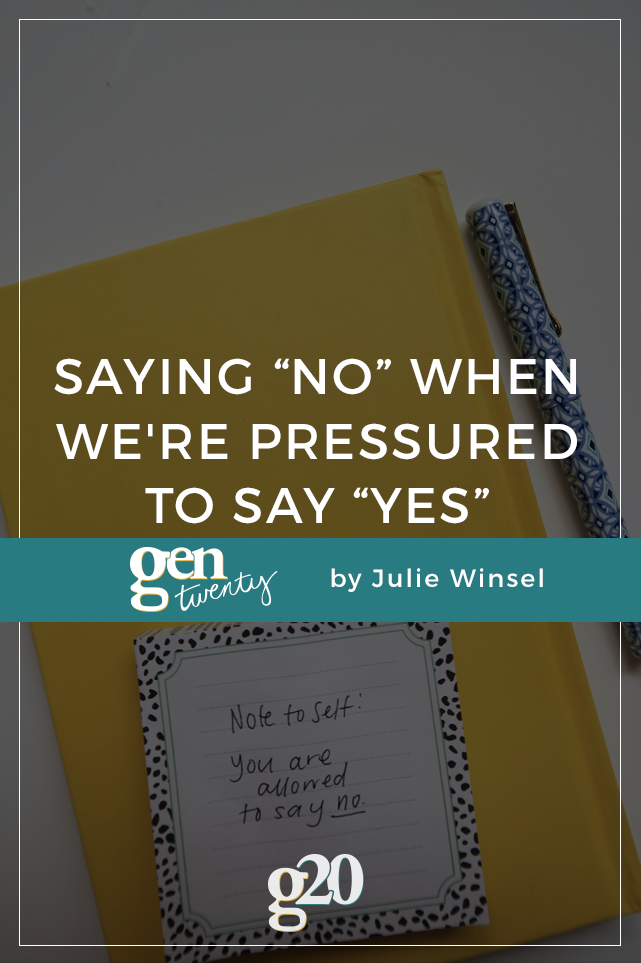 It’s easy to say yes. It’s easy, when someone approaches you with a project or task, to agree to do it and just deal with what it means to have that task added to your laundry list. And yet you feel compelled to take it on. Saying no means that you could be disappointing that person.

But saying no means also saying no to the feelings of being overwhelmed.

So why do we feel so pressured to say yes all the time?

You should say yes to everything because it will make you look reliable, flexible, motivated, and ambitious.

By taking on this task, you are potentially taking it off someone else’s plate and they’ll be forever grateful to you.

Being a yes-person all the time is going to put too much on your plate. I’m going to tell you right now that not all experiences are good experiences and taking something on just to take something on, whether or not it will push you in the right direction for your career aspirations, is going to exhaust you and keep you from focusing on the tasks you actually care about.

I’m also going to remind you that having to give the task back or admit you can’t do it after you’ve already taken it on is going to look much worse than having said no in the first place.

Saying no when they first ask shows that you know how to balance your priorities and tasks and know what you can take on. Giving a task back shows the exact opposite. And it’s straight up embarrassing, no matter how understanding your boss may be.

If you take on too much you’re going to start feeling the pressure. You’re going to be overwhelmed, overstressed, and feel like you want to just quit outright and start fresh with a new job, a new name, and in a new city (don’t do this).

Having too many projects and tasks also splits your focus and ability to produce quality work since you’ll be quickly jumping between assignments without the ability to dedicate the time they deserve.

Because you’ll be finishing them to get them done and not to do them well, your quality of works suffers and the odds of you impressing the higher ups will decline.

Look, I get it. It’s a lot easier to say yes to something and suffer through it than say no and potentially look unreliable. And saying yes to everything shows your tenacity and resilience, and adds experience to your resume. Trust me, I get it.

But as a former yes-person, I can attest that it’s only going to end in heartbreak and breakdown. Prevent future breakdowns by subscribing to the “No Philosophy” today!

Beyond the obvious “just say no” strategy, it’s important to set yourself up for success with the projects you already have and how, when you do say yes to a project, you know you can handle it.

The biggest way to do this is know your limits:

Saying no takes practice and bravery. It takes knowing what you’re capable of and knowing your limits. And it takes honesty with all involved. If you say yes to everything, that facade of you being dependable fades quickly and will ending up hurting you more than helping you. So start saying no. It will be a relief.

5 Ways to Exercise at the Office That Target Your Posture, Circulation, and Mental Health

We're big on not letting you neglect your health, even during your busiest seasons.