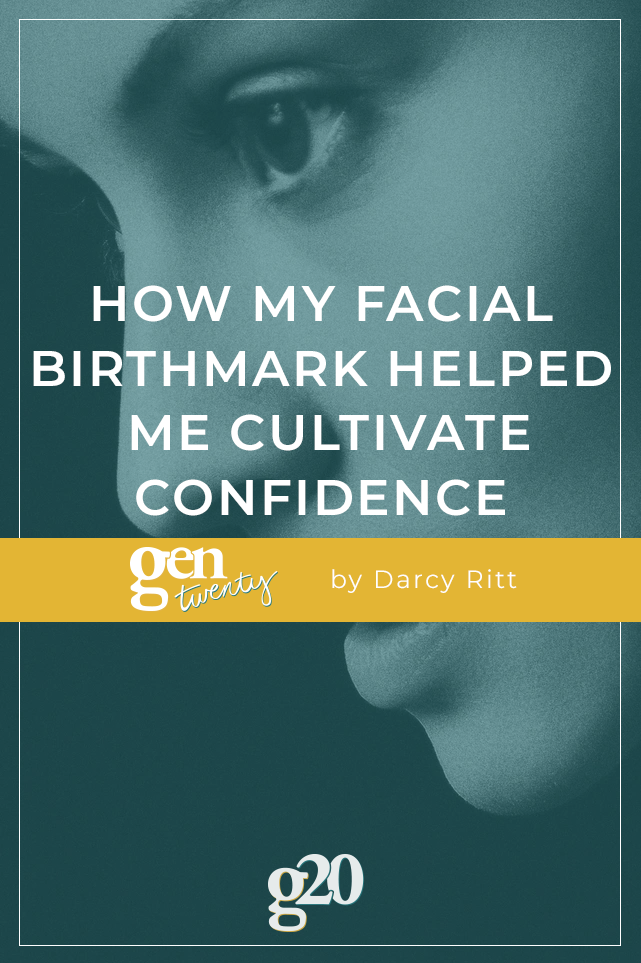 My twin sister and I were born just 60 seconds apart–thanks to modern science and an impressively-fast C-section. Our parents were ecstatic to welcome two healthy babies home, especially since we were a few weeks premature.

We’re fraternal twins, but people have a hard time believing we’re related at all! Just about everything was different about us from day one: my sister has fine, silky blonde hair, whereas my wavy brunette locks nearly give Cousin It a run for his money. My sister’s a natural lefty, and I’m a righty. I slept soundly during the night as an infant while my sister took the day shift–never letting our parents get a wink of sleep. If she’s yin, then I must be yang. Sometimes I don’t think we could be more polar opposite if we actually tried.

That is–besides the two giant, purple birthmarks running down both of our faces.

When my parents boasted pictures of their newborn girls to their coworkers, they were briefly congratulated before being asked the inevitable “What happened to them?”

Right smack in the midline of our newborn faces, starting at our foreheads and running down to our upper lips, were dark purple stains. It looked like we had gotten into Mom and Dad’s art supplies and had an unsupervised paint fight. People couldn’t help but stare at our Harry Potter-esque lightning bolts, and doctors told our parents that the marks would never go away.

Fast forward a few years–the birthmarks somehow (magically) disappeared without any medical intervention. The only times they would rear their spiteful heads was when either of us were hot or upset, revealing the blemishes that we had worked so hard to wish away. To combat this, we strategically-dabbed on mounds of cover-up, and voilà—they were Houdini’d away yet again.

The years went on and we looked like any other teenage girls, fully-clad with jagged bangs (that we cut during homeroom using craft scissors) and way more black eyeliner than our blue eyes knew how to handle. We have a slew of embarrassing, borderline blackmail-worthy yearbook photos–but not any more than anybody else does. We no longer had distracting birthmarks running down our faces, we no longer had to explain why we were born different and couldn’t explain why. We finally blended in. We were normal.

Or so we thought.

Well, fast-forward another decade to age 23–can you guess it? The birthmarks returned, and this time with a wicked vengeance. It’s as if they knew how much we hated them, how desperately we wanted them to kindly show themselves to the door and never (ever) come back.

But there they were yet again–there to show us that karma is alive and well.

Their reappearance conveniently happened during a big soul-searching, who-the-(insert expletive here)-am-I?-phase of my life. I had started developing an interest in spirituality and had sworn myself off of makeup two years earlier, saying that altering my face in any way was being untrue to my natural self. The only make-up that I let myself use was cover-up under my eyes, because I was also genetically blessed with eternal dark circles that make me look like a post-fight Rocky.

Cue the beginning of my quarter-life crisis: I was starting to actually feel comfortable in my own skin, but now I had this pigmented blob that I had to hide yet again.

I decided that I had a few options: 1). I could undergo a laser procedure to remove the birthmark. After a little research, I found out that this is considered a “cosmetic procedure” and would cost me thousands of dollars that my Ramen-eating, post-graduate self definitely didn’t have.

Well, time for Plan B: I could use my trusty concealer like I did back in the old days–that’d do the trick. Wrong—I don’t think all of the Cover Girl products on the East Coast could entirely erase my splotchy secret. That only left me with one option: accept defeat and feel my already-wavering self-esteem plunge even further into a dark abyss.

Finally, a plan-of-attack that was at least viable.

So there I was–in my mid-twenties, at a time when I should have been much more comfortable in my own skin (literally) than I actually was. I should have felt light-years more confident than my thirteen-year-old self, but that insecure prepubescent girl and I were starting to pull some sort of a Freaky Friday body-swap.

What happened next most definitely didn’t happen overnight, but instead creeped up on me  gradually. So gradually, in fact, that I almost didn’t notice it happening.

I was getting tired of fighting against my birthmark that clearly wasn’t saying “sayonara” anytime soon. I figured that I could either be eternally-pissed with the cards I was dealt, or…I could learn to practice what I had been preaching all along: to feel confident in my own body.

The moment when I realized that I had been being hypocritical–that I hadn’t been embracing my natural-beauty-is-beauty mantra as much as I thought was–was a tough pill to swallow. I had no choice but to take a long. hard look in the mirror (both literally and figuratively) and face my insecurities head-on.

Okay, you can do this. I felt like I was riding the roller-coaster of body-acceptance that every woman has to ride in her lifetime–except mine was going at ultra-speed. Some days, I wanted off the ride. But I stuck through it, doing my best to hold on during every loop, twist, and turn.

It most definitely wasn’t instantaneous, but little by little, my inner monologue started sounding a lot more like nurturing sisterly advice rather than a brutal episode of a Comedy Central Roast. Instead of bombarding myself with reasons why I hated my birthmark, I decided to try to come up with reasons why I actually kind of liked my birthmark–even if it was a total stretch.

Spoiler alert: it was.

Hmmmm…well, for starters, I don’t have to pluck my stubborn upper lip hairs because they’re conveniently masked by my birthmark (which is a major plus).

But more importantly, I guess my birthmark does make me pretty unique. I mean, how many people can say that they have a tiger stripe running down their face? I’ve always taken pride in being a bit of a black sheep, growing my hair past my waist and piling on heaps of funky jewelry. Maybe my birthmark was just another thing that made me, well…me.

Starting to accept myself for how I was–birthmark and all–shifted my outlook from a pity-party to more of a gratitude-centered mindset. The more I thought about it, the more I realized that a birthmark that doesn’t affect my health in any way was no more than just that: a birthmark. And wasn’t it silly of me to worry about something so…silly? I have a lot to be grateful for, and focusing on something so trivial was taking away from me appreciating all of the awesome qualities that I have to offer.

Just the other day, I went to the dermatologist for a routine acne appointment when her gaze lingered just a few seconds too long on my face.

A (majorly) awkward silence ensued, followed by a concerned “Do you want to look into laser procedures for your face?”

Instead of getting über-offended like my old self would have done, I took a second to think.

And you know what?

It was the truth. 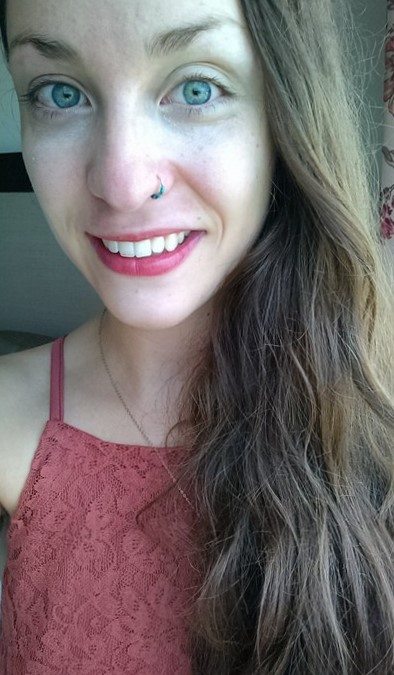 The Gift of Self-Care: Go Love Yourself Box Review

Here's our review of the Go Love Yourself subscription box.