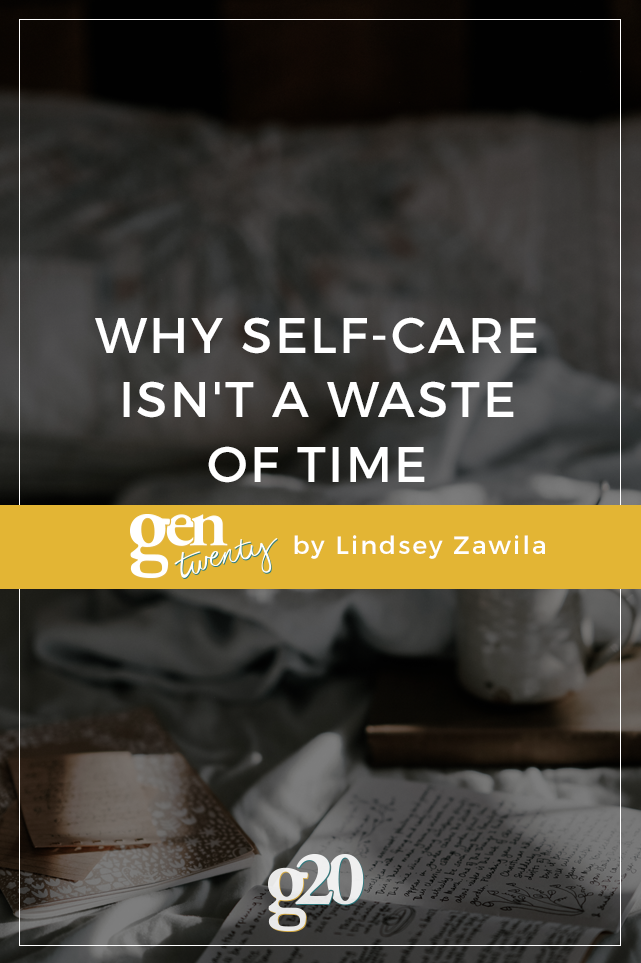 I wouldn’t feel good during the day. A simple task like eating felt like it was making me sick almost every day. I was gaining weight for no reason as well, even though I was struggling to eat and working out fairly consistently. Working was a struggle, and I seemed to be in-between jobs a lot.

So I would stay home a lot and watch TV.

My favorite shows intrigued me. Sometimes I knitted while watching TV, or sketched or read.

I was just trying to keep busy and not feel so lazy.

Later on, I found out that I had a chronic problem that would eventually require surgery.

The Importance Of Self-Care

I was in constant pain for months.

And it was difficult to understand my self-care as something other than pure laziness or a waste of time.

I had difficulty functioning every day. I would be in constant pain when I was working full-time, and I’d always have a stash of pain-killers to help me get through the day. A tough day at work was absolutely harrowing, making the physical pain exponentially worse.

Doctors took a while to find the physical problem.

So I thought the main problem was in my head.

Nothing is wrong with taking mental health day. In fact, they may even be as necessary as sick days. Just like when your body is exhausted or falls ill and needs time to recover, so does your mind. Your mind needs to recover when you are mentally exhausted or unable to function mentally during the day.

Your phone won’t function if you don’t recharge it.

Similarly, you won’t be able to function unless you recharge your physical and mental batteries.

Everyone needs to recharge at some point, mentally or physically. Maybe it seems like some people don’t need to recharge because they recharge themselves a little bit every day. Some us can power through for a long time, but then need to recharge for a longer time when we fall ill from pushing ourselves too much.

Self-Care Is Not A Waste Of Time

My issue is that I was taking self-care weeks.

I do strongly believe in self-care. I would be absolutely lazy when I got home from a rough day at work. One of my closest friends comes home after work and plays video games. If I really felt down, I liked to read motivational quotes or cute puppy videos.

We’ll burn out if we don’t take care of ourselves.

But for me, it just felt like I had to take weeks to take care of myself. I wasn’t even sure what burned me out. I have taken weeks and months for self-care after traumatic experiences and losing a loved one. But I was still overall functional enough to continue going to school and work while I recovered.

This was different, and therefore more difficult for me to accept as self-care instead of pure laziness.

I still didn’t know that I would need surgery.

And I still assumed that the problem was in my head.

I was very hard on myself. I would tell myself day after day to get my act together and be productive for once. To stop wasting time and job search once again. Or to take even a simple retail job or waitress job again to have an income until I could find something better. Or at the very least, be useful around the house and clean or cook dinner.

The only thing I felt like I was accomplishing was finding out what my favorite fictional television characters were doing in their fictional worlds that don’t exist. Law And Order: SVU marathons brought me closer to Olivia Benson and her team, and they became my primary friends.

But I didn’t feel much better physically or much different mentally.

It was more and more difficult to recognize my self-care as not a waste of time when I spent hours watching SVU almost every day.

But self-care is not a waste of time as long as it is recharging you.

I didn’t realize that my physical, internal problem was draining me so severely, requiring me to take more self-care than most people need.

And some of us will still need more time (and sometimes even medical intervention) to fully recover.

Forgiving Yourself For Self-Care

Now that all the preparations are made for surgery, my next obstacle is forgiving myself for taking so much time for self-care.

It’s definitely easier to do in retrospect.

I am even grateful for the months I spent working on and off because I wouldn’t have been able to take days off for all the doctor’s appointments and to recover for the surgery.

In fact, if I had my dream job or any job I loved and worked at full-time, I probably wouldn’t have acknowledged any problem at all. I would’ve just popped more painkillers to continue with the day and kept working until my physical and mental battery became completely fried.

Sometimes I still look back and wish I could’ve been even a little more productive.

Maybe more cleaning around the house, or wishing I wrote a book with my several weeks of not working.

But self-care isn’t a vacation.

It’s time you need to recover from something.

And I’m learning to forgive myself for taking so much time off, for needing so much self-care, and for being so hard on myself for doing so.

Because I just really needed the self-care.

And as a fun bonus, be sure to check out this 30 Day Self-Care Challenge!

How I Got Through The Death Of My Dad

Losing a parent is a devastating time. Here's how I got through it.