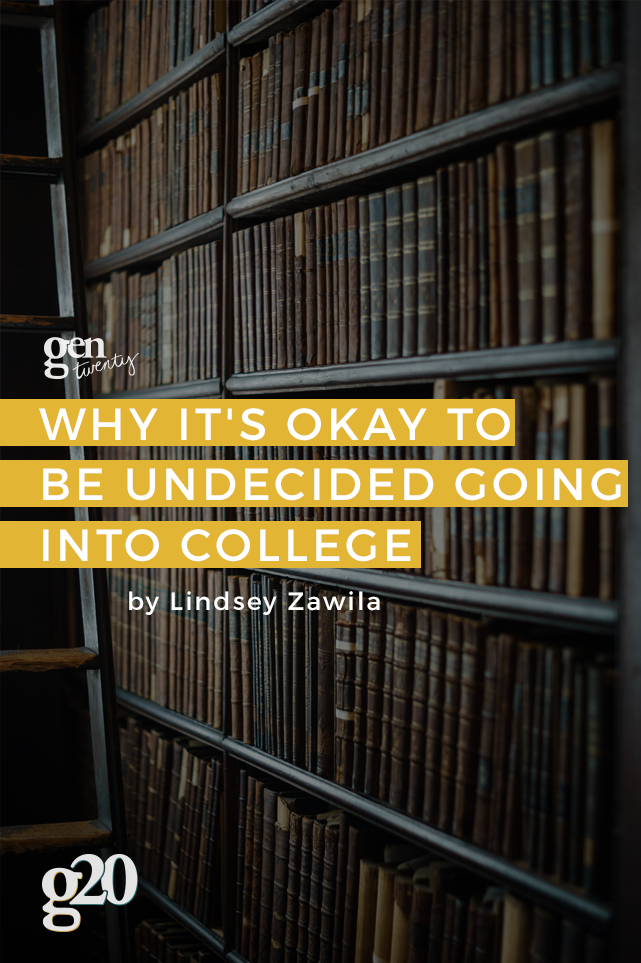 The most common question when I was in high school deciding on colleges was some variation of “what do you want to study?”

It makes sense that people are asking. It’s a huge part of choosing a college. Some have more options than others, and some specialize in certain fields. It is useful knowing what you want to study beforehand.

But the constant interrogation is exhausting.

And if you’re not studying something with a clear career path like engineering or computer science, follow up questions often include “So what do you want to do” or “What are you going to do with that?”

But it’s okay if you don’t know.

It’s perfectly okay if you do not have your entire life planned out by the time you’re seventeen or eighteen.

Because in all honesty, none of us do.

My high school was full of high driven students that aimed for good colleges and challenging studies. Most of my peers were set on studying either business or engineering, unless we had a long-term plan to go to law school or medical school.

I considered some of those options too, until I realized that I really had no clue. Someone that considers engineering, business, law school, and/or medical school clearly has no idea what they want to do.

So I went into college undecided.

But there is an unfair stigma for doing so.

A friend’s parents commented that I needed extra help if I was undecided. Others were dumbfounded, unsure of how to respond. Many went with some form of a sympathetic “Oh” or “It’ll be okay.”

READ MORE  Is It Worth It To Get a General Studies Degree?

And it will be okay.

It will be okay.

Most of the people I went to college with changed their minds in some way, including my high driven high school classmates. The changes in major I heard of included pre-med to business, engineering to psychology, pre-med to Spanish, aerospace to marine geology, and advertising to education.

And that was just a change in major.

At the end of college, I saw many of my classmates change their career paths completely.

Because in the end, none of us really know what we’re doing.

So there’s nothing wrong with going into college undecided.

Clearly, most all of us are at least a little undecided when they go into college.

If you’re currently undecided, keep in mind that even after college, many people do not stay in the same career field.

Ask many working professionals that are generations older than you. Listen to their career paths, and learn that life is unpredictable.

There is just no guarantee on anything.

Even if you are fortunate enough to find your dream career, it can all disappear in a heartbeat. An unfortunate economy can force you to seek work elsewhere. A family or personal emergency can force you to relocate and potentially give up your passion. Or your significant other may find his or her dream career in another city, forcing both of you to make life changing decisions.

So it’s okay that to admit that you don’t know what you’re doing.

None of us really do.

But that seems to be the stigma with being undecided in college. Because people want to believe they have control, even on an unpredictable and uncontrollable life.

Being undecided in college is admitting that you don’t know yet what you’ll like or what you want to study. It looks like you aren’t headed into any field. People have the notion that you aren’t going anywhere. They think you have no plan, and you’re just messing around.

But since a lot of people change their mind in the middle of college or after college, a lot of us could arguably be “messing around.”

Going into college undecided shows you’re brave enough to admit that you don’t know what you’re doing, and smart enough to explore your options before dedicating yourself to one.

Because what we love to study may not be what we want to do as a career.

Many students will realize this towards the end of their college career. By then, their only options are to stay another year or two in college, attend vocational, technical, or graduate school to assist in a career switch, or deal with it until they can make a switch in the field.

Yet nobody seems to give these people sympathetic “Oh’s” or “It’ll be okay” or “Sounds like you don’t know what you’re doing”.

Because for some reason, running into the wrong direction and changing your mind completely is worse than being openly undecided.

In reality, we’re all at least a little undecided.

Even the best laid plans can go awry.

So follow your interests, and keep an open mind.

It’s all any of us can really do.

4 Things To Consider When Choosing A College

Always keep in mind what you want out of your university experience.