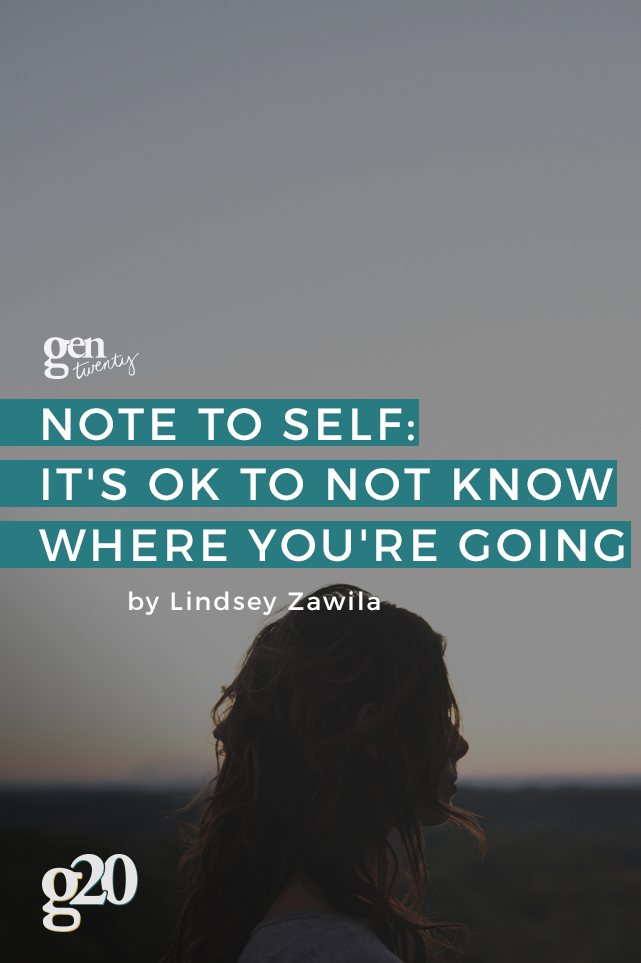 All my life, I’ve been asked about my future plans.

Eventually, I developed a robotic formula to answer these questions (fill in the blanks as needed):

“I like [fill in name of activity/field] and I want to study [name of major]. I plan to attend [name of university], and I will graduate in four years to be a [name of job]. I plan to move to [name of city] and work for [name of company]. I will be married by [age] and have [number] of children. We will live in [location] so they can have better schooling opportunities. And then when they go to school, I will retire at [age] and live in [location], so it’s close enough to the children, but still comfortable for me and my significant other. And then I want to be [choose: buried or cremated] when I die at [age].”

Okay, so that was a bit drastic.

But I did used to plan my life years in advance.

I planned which terms I wanted to study abroad, and which classes I would need to take to still meet my graduation requirements. I knew internships I wanted and in which cities, and I had it planned out for specific terms so I could still graduate on time. I found a city that I wanted to move to, and I had deadlines of when I wanted to move there. I had relationships depending on me following through with this plan.

I had all but a formulaic answer memorized to recite at family gatherings.

But of course, things almost never go according to plan.

I was only able to do a couple of the study abroad trips I wanted. Not all the classes I wanted to take would fit in my schedule. I found unexpected internships that led to more unexpected fields, until I needed to step away from all of it to clear my head. I graduated almost a year early due to extreme circumstances on campus. When it was time to move to the city I planned to, I found that I couldn’t do it without a really bad feeling in my gut. And I let nearly every social relationship fall apart.

Now I don’t even try to recite any formulaic answer.

I just tell the truth: I don’t know where I’m going.

This usually results in looks of horror from seemingly-knowing adults. Except the adults that don’t like me. There’s usually a glint of sadistic enjoyment at idea of my life being a mess in the eyes of those adults. Some feel the need to press further, asking me what I mean by not knowing where I’m going. Others push for me to plan, because life is so much less terrifying when we have a plan.

But in all honesty, no one knows where we’re going.

Chances are that none of them knew the answers to their own questions when they were in their twenties.

Truth is, probably very few of the greatest figures knew where they were going until they got there.

When I interned at the State Department, I met one of the top translators in the nation. He has literally been in confidential meetings with world leaders to translate discussions on diplomatic relations and policies.

He is also one of the most humble people I have ever met.

From my time working with him, I learned that his road to that title was not simple. In fact, he was interested in a different language when he was in college, but certain factors at the time led him to be an expert in the language he works in today. He just really enjoyed language and culture, and decided to spend time in the host country to learn more. Then he became a university professor and a translator. Now he’s the top translator in that language.

But I doubt he told people when he was in his twenties that he wanted to be one of the nation’s top translators.

I doubt he even knew that’s what he would become.

The point is that none of us know where we’re headed.

Not even the seemingly-knowing adults that like to interrogate us about the uncertain future, expecting us to have the answers that they didn’t have.

Because the future is scary.

The uncertainty is paralyzing.

But a predestined future would be so much worse.

All we can really do is follow our passions, take the opportunities in front of us, and keep moving forward. Very little goes according to plan, but that doesn’t mean that everything is going to go awry. It’ll be an adventure that we won’t expect. And if we allow it, life will be an adventure we cannot imagine.

None of us really know where we’re going.

How To Answer Awkward Questions During The Holidays

Parties are fun. Those uncomfortable questions are not. Here's how to answer them!