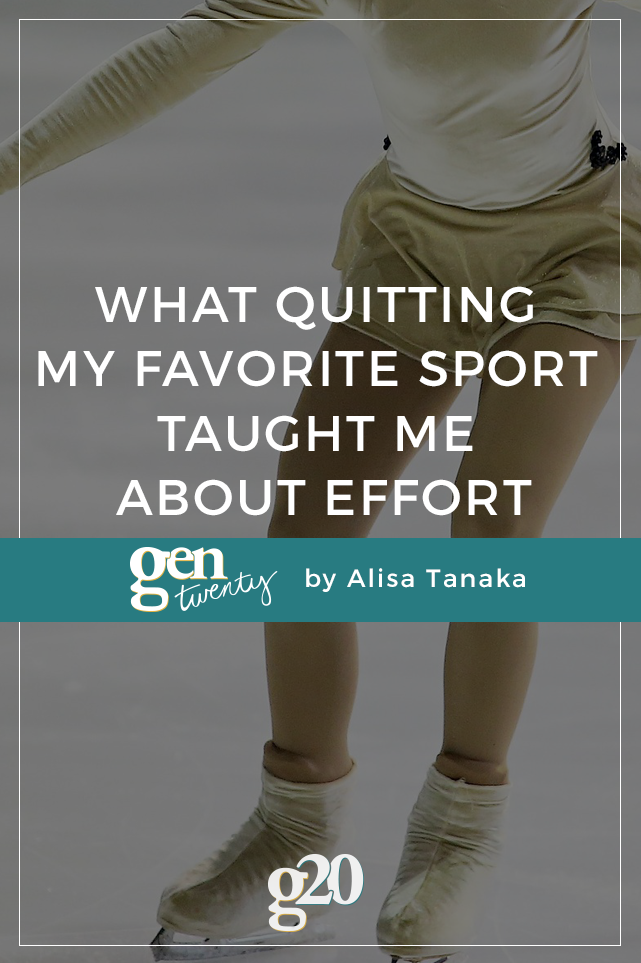 My dreams of becoming a figure skater after I saw the 1998 Olympics on TV quickly turned to trepidation when I completed my first group classes. All I saw were skaters who were better than I was, where I was lacking, even though it was the one thing that I looked forward to on the weekends.

After my favorite coach moved, I started questioning whether or not I loved the sport for the right reasons, whether or not I was willing to put the work in. The answer my 11-year-old self reached on both counts consisted of two letters.

I wanted the glitz and the glamour of the Olympics, but I wasn’t willing to put in the blood and sweat to get there. I didn’t believe that I loved the sport. I thought that being bullied was a good excuse. I reasoned that I could always go back.

Before I knew it, a week turned into two, and two weeks turned into four. Months turned into years, and my window of opportunity to become a competitive figure skater closed.

As I got older, I realized that I did have a passion for the sport. There was a certain freedom that I experienced on the ice, yet, I had consciously chosen to close the door on something that made me happy.

At the time, I didn’t give 110% because I was focusing on where I was not, rather than where I was. I wanted to skip the one-footed gliding, the dips, the swizzles, and go straight to jumps. Rather than enjoying the process, I often came home frustrated.

READ MORE  Why Should We Even Bother Setting Goals?

For a long time, I lied about why I had stopped skating because I didn’t want to accept the truth. I had been satisfied with my decision at the time. I rationalized it by making excuses for myself, but something about the way I left bothered me, even though I couldn’t figure out what it was.

I’ve only recently been able to put my finger on it: it was the fact that I didn’t give skating 110% of my effort.

For a long time, I tried to make excuses for myself by telling myself that the life lessons figure skating gave me are more important than the skating itself, or any other material representation of success. As true as that may be, the regret of not having given 110% of my effort is something that I’ll have to live with for the rest of my life.

READ MORE  Fangirl Problems: Loving Something a Little Too Much

It’s much easier to look back and ruminate on things, to wish that circumstances turned out differently than they did, especially when you don’t give it everything you have.

The decision I made to quit skating taught me to give 110% of your effort to everything, be it a sport or a job interview.

There’s a level of personal satisfaction that you will walk away with if you do, knowing that even if you didn’t get where you wanted to go, you gave it your best shot. I never got my shot at a figure skating career because I walked away before I was done.

Since then, I’ve tried my best to give 110% of my effort to everything because I find that I am much happier that way.

I recently contemplated throwing out my skating boots and blades as I cleaned my space in the style of Mari Kondo, and I have to admit that I came close to discarding them. When I looked at them, I remembered the frustration, the regret, the bullying, as well as the freedom, the challenge, the satisfaction I felt when I learned a new skill, the lessons I learned, and the fact that for those three years, the ice rink was my safe haven.

I may not have won an Olympic medal, but I know that the sport has taught me more than how to balance on silver blades on frozen water. It taught me about the consequences of giving up halfway through something, and as a result, I’ve changed my approach in a way that affects everything in my life.

What Quitting My Favorite Sport Taught Me About Effort

If you don’t give off good energy in a bad situation, who will? Thinking about constant negativity in your life...