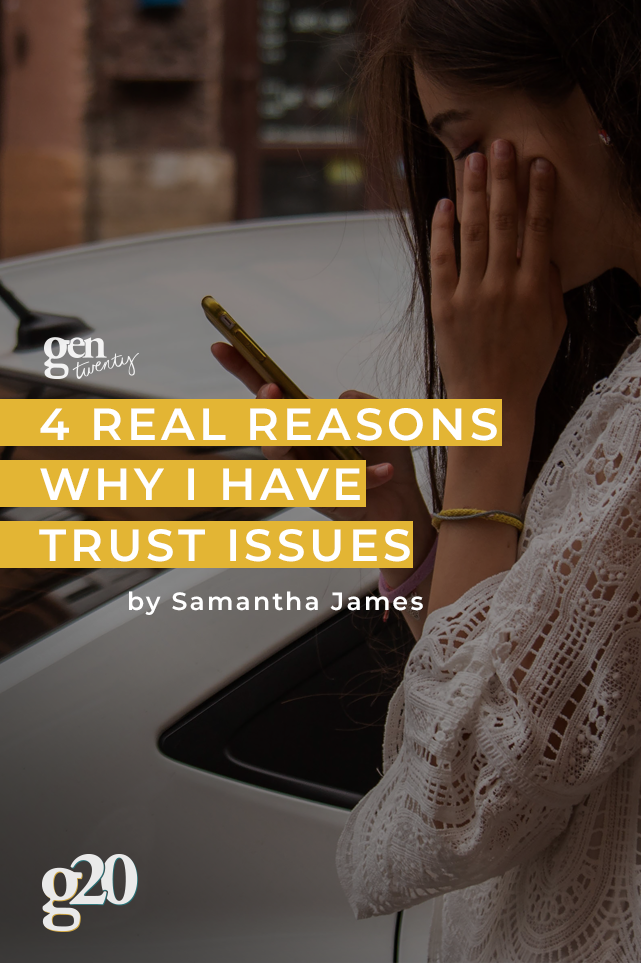 Dating sucks. Relationships are hard. These two sentences are ones that many twenty-somethings, male or female, can relate to. Things sure are not how they used to be in terms of dating.

But do you know what makes all of this even harder? Trust. Trust is something that a lot of us have issues with, and honestly, many of us likely have very good reasons to have these trust issues.

For those of us who do have trust issues when it comes to relationships, we all have our own reasons why. Things have likely happened to us — or people close to us — that have scarred us, and have given us a reason (or, unfortunately in some cases, many reasons) to have trust issues.

Why I Have Trust Issues

1. I have been the other girl.

Yes, I have been the girl that your boyfriend has been texting, Snapchatting, and even hooking up with on the side. Sometimes I did not know he was in a relationship… and other times I did.

It’s scary to think you do not even know about me, right? That’s just half of the reason being the other girl has caused me trust issues; because I have seen (and been apart of) the other side of the situation.

You likely read the above and think that I am a horrible person, but please don’t. I’m sure there are many of you that can unfortunately relate.

Not only have I been cheated on, I know people who have been cheated on as well. I am not only talking about physically cheating though. In today’s day and age, there are multiple types of cheating, including emotionally and mentally. Every type of cheating just sucks, and it is so hard to begin to trust someone again after they have cheated on you.

It is also so hard to begin to trust someone who has cheated in general. If they have already done it once, what is going to stop them from doing it again? How can we begin to trust people when cheating, in many different ways, is becoming more and more popular?

Do you know what is even scarier when it comes to being cheated on? It is not always just when things are going bad. I know people who have been cheated on, and they had no idea there was anything wrong with their relationship. Being blindsided by this, when you are genuinely happy because things are going well, is crushing and has long-term affects, especially in terms of trust.

3. There are so many easily accessible options.

Do you need me to go on? Because I can start naming social media channels where people can easily direct message with each other, too. There are so many ways to meet people now that involve just the use of your phone. As great as this is, it is worrisome.

People are not out in public meeting and making plans anymore. They can just meet on an app, make plans for a quick hook up at one of their homes, and just go for it without being spotted by anyone. There is less risk and less worry involved in terms of being caught.

Have you ever been scrolling through a dating app, and see someone you know that is definitely taken? Because I know that I have.

4. People don’t want to commit as much as they used to.

To continue with the whole “meeting people online” theme, this convenience has made it more common for people to not want to commit. They can casually see and hook up with many people. Why would they need to commit to one person anymore?

We are no longer in the mindset of, “I need to meet someone, settle down, and start a family.” In some ways, that is great. But in other ways, especially for those who do want to commit, it is not. It is worrisome. How do you know if someone is actually committed to you… and just you?

This author wishes to remain anonymous.

Make time to pick up a book to reap the rewards!