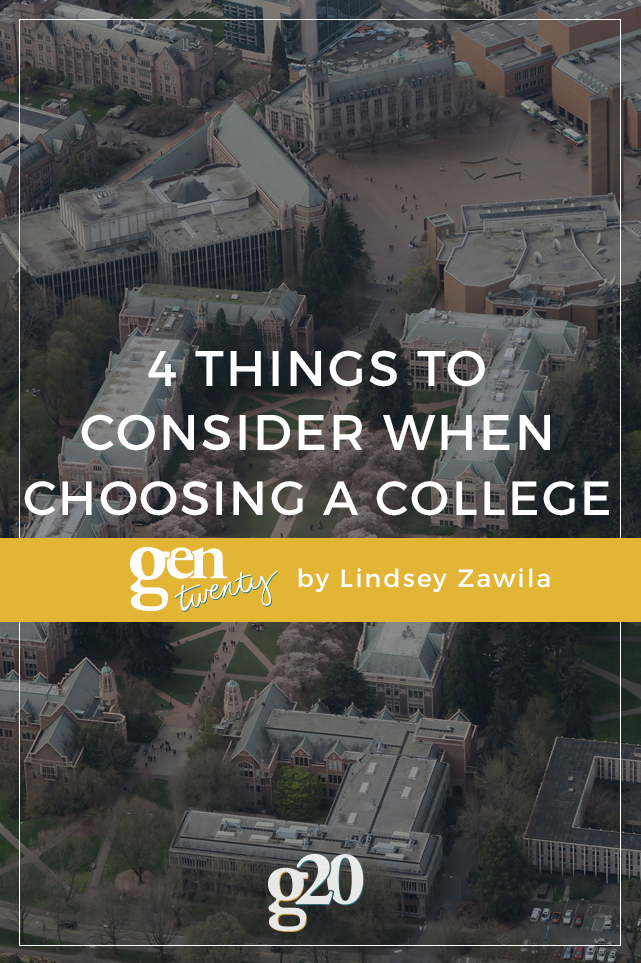 When I was in high school, college was the expected next step.

But where do we even begin?

Do you want a private school or state school? What about a city school or campus community? Have you considered study abroad? What about research and internship opportunities?

There was very little guidance for me when I was choosing schools, even in a fairly good high school with a high percentage of graduates that pursue college. It was simply, “Oh that’s a good school, you should go there.”

I ended up going to a Big Ten state school with a vibrant campus community, and I worked at a private city school during one summer of my undergraduate years. I studied abroad three times without prior knowledge of my school’s study abroad program. I became a research assistant in two departments, and I held multiple internships on and off campus.

I don’t regret it. I made the best of the opportunities available.

However, if I go to grad school, I’m definitely going to be more prepared.

Here are four things that I definitely recommend considering when choosing a college:

The simple breakdown that I received here is that private is more expensive, but each student gets more individual attention at a private school. Many religious and Ivy League schools are private. They also tend to be smaller than some state schools, which allows for the more focused individual attention.

But as mentioned, they are generally more expensive. However, everyone pays about the same tuition. There is no difference between in-state and out-of-state tuition, which can be a big factor for those going out of state.

Most Ivy Leagues do not take AP credits, and some private schools don’t allow you to transfer community college credit. The school wants their students to take their own classes. If you’re having financial issues, the school expects you to tell them, and then the school will help you.

The private school that I worked at during the summer was in the city. It was so close to my parents’ home that I could drive there in half an hour if I wished. There was also a major train line running through the university to get pretty much anywhere in the city.

In contrast, my home university was a vibrant campus town in the middle of corn. Seriously, it was cornfields in all directions. I felt like I stood out like a human in fields and fields of corn.

But the campus community was strong. There was a prominent Greek life, hundreds of extracurriculars (including a squirrel watching club and October lover’s club), and strong student pride.

Meanwhile, in the city, there was much less student pride. There’s less university pride for football, basketball, and baseball games because the students have city pride for professional sports teams. Their city campuses may be smaller, but they have the entire city at their disposal.

Generally, the campus town students have a stronger sense of community. They know how to socialize, they can talk to others easily, make friends quickly, and navigate people better.

City students are generally more independent (as many are commuters), more in tuned with their environment, they can navigate public transport easily, and they learn to support themselves quicker.

Both experiences are different, and both have to learn from each other in the end.

These are spoken generally, and there are always exceptions. These are simply what I observe from being in both crowds.

I knew I wanted to study abroad before I even got to college. I loved traveling, and I wanted to continue traveling. From what I understood, all universities had a study abroad option, so I would figure it out when I got there.

I was right and wrong.

There are always opportunities to study abroad.

But not all universities will accept the credit.

My big state school allowed more flexibility, so I had many study abroad options to choose from. Some were more sheltered than others, and the ones that were not through the university (or at least approved by the university) were much more difficult. One that I always wanted to try was Semester at Sea, but my university wouldn’t approve it. If I found a program independently, I could get it approved, but the process would literally take 3-4 years. I’d have to plan to get that program approved in my freshman year, and there was still no guarantee that it would be approved.

Related: Why You Should Really Study Abroad in College

But some schools are extremely negative about study abroad. Sometimes, even the major makes study abroad difficult. My major focused on international relations, so I was required to study abroad for at least a semester. But the education department won’t let their students study abroad without a serious fight, and many can only fit it into a summer because of their curriculum.

Meanwhile, some schools such as Ivy Leagues will thoroughly discouraged study abroad. They claim that taking overseas courses would be taking much worse baby classes, and students would be hurting their own prestige by pursing educational opportunities at other schools instead of their home Ivy League school (Ivy League schools especially think their courses are the best).

There is a lot to be learned outside of the classroom that only can only be learned by living in another country. Whether it’s worth giving up a semester of Ivy League education will have to be a personal decision.

Some Ivy League schools do tend to have amazing research opportunities though. However, my state school is a big research school too. They also had some incredible opportunities as well.

Internships and work experience are also important aspects of a college career. Many employers don’t even care if you went to an Ivy League, if you were your frat’s president, or if you got a perfect GPA. They just want to know that you can do the job.

Many jobs do require research abilities. Pursuing research can show that you are able to handle technical and tedious work to achieve a goal.

My campus town state school had more on-campus opportunities for research and internships. City schools have the entire city at their fingertips, so many nearby companies will recruit interns year-round, and it is often easier to get internships during the fall or spring.

Internship and research opportunities are more difficult to research went looking into a university, so keep in mind the location (city vs. campus) and what the school is known for. Often, there are classes that act as placeholders or credit for internships or research, so look into classes as well.

Deciding on schools can be a lot to take in, and guidance can be lacking. While there are other major things to consider as well when determining what school is the best fit for you, these are things that impact your experience both during and after undergrad.

Always keep in mind what you want out of your university experience (for undergrad and grad school), and look into what the school has to offer.

What I Learned From Doing Whole30

In our twenties we have the ability to create long-term habits that are either good or bad for us.