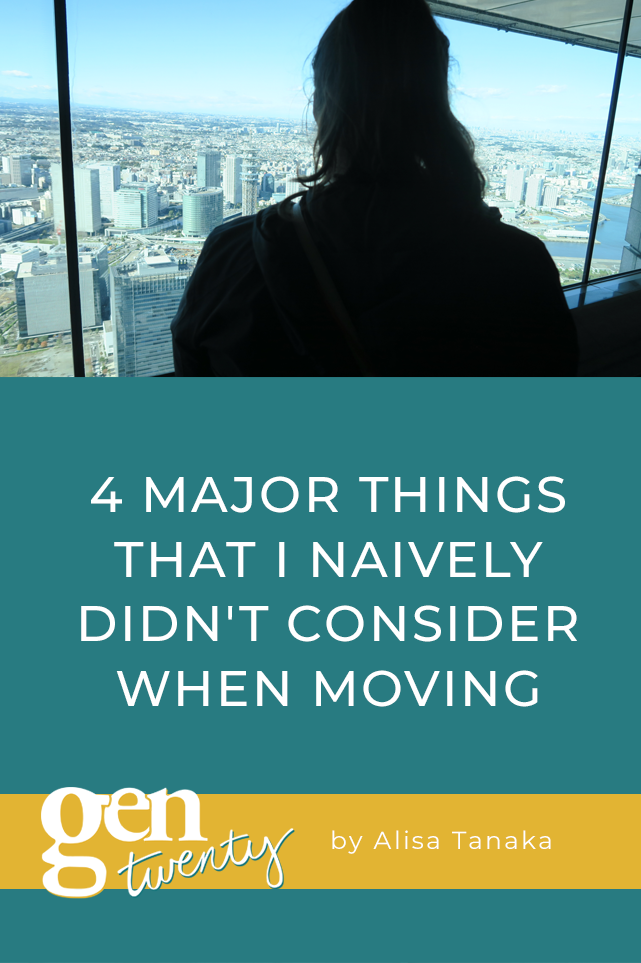 Moving to a new city is an exciting thing for anyone. I was ecstatic when I solidified my plans to move from Changhua to Tokyo. I knew that this was the right thing for me at the time, and my head was filled with dreams about how I could accelerate my career.

Now, more than a year later, I have had the chance to reflect on my choice. Here are four things that I should have considered and pondered in more depth.

3 Major Things That I Naively Didn’t Consider When Moving

In making the choice to move to Tokyo, I didn’t really have to consider the difficulties of learning a new language. I have grown up speaking Japanese since childhood, and although I would not consider myself perfectly bilingual, I knew that the fact that I had a strong preexisting base in Japanese would minimize the problems I experienced in terms of daily life.

However, that doesn’t mean that I haven’t struggled; there have been instances when I don’t understand things that are being said.

Regardless of whether or not you’re moving to a new city in a new country or a new city within the country you’re already living in, there will be linguistic differences, slang, and things that you don’t understand. You may not be able to understand everything at first, and yes, over time, you will learn the nuances of those differences, but that doesn’t mean that it isn’t jarring.

Find a way to channel that frustration and turn it into motivation and set a goal for yourself. In order to fine-tune my formal Japanese, I have begun studying for the Japanese Language Proficiency Test, with the hopes of earning a certification, which would open more doors for me should I choose to stay in the country.

Regardless of whether or not you are learning an entirely new language, or adjusting to East Coast English after moving from the West Coast, learning the local expressions and language will help make your transition easier.

Every culture has different social expectations for women (and men). Although I was partly aware of these prior to moving to Tokyo, I was not prepared for the impact those expectations would have on my life here.

One example is the concept of wearing makeup for work. Growing up as a figure skater, I associated makeup with performance. I never put on makeup on a daily basis, something that continued once I moved to Taiwan, especially since my students didn’t care what I looked like. However, here in Tokyo, wearing makeup to work on an everyday basis is not only expected, but the deliberate choice to refrain from wearing makeup is frowned upon.

Regardless of whether or not you will be moving to a new city or a new country, there will undoubtedly be adjustments you will have to make. While they may not be drastic changes, a change is a change, regardless of how small.

When I announced my decision to move to Asia, one of the most common questions I was asked was, “Will you miss California?” My response to this question was always an unequivocal no. I am aware that as someone who has family in the city and a strong base in the language that I enjoy several advantages that others do not. However, that doesn’t mean that I haven’t had to come to grips with some cultural differences and find a way to navigate through this society.

I don’t think you can never be truly prepared for the differences in culture from city to city or city to country, but these things are part of the experience. Embrace these differences, take what you like, and learn to navigate the things you find less than enjoyable.

This should be a no-brainer, but it is definitely something you need to consider when moving and ensure that you are prepared for.

I will be honest and tell you that I was not prepared for the expense of moving to Tokyo. Changhua had a relatively low cost of living by comparison. I knew that moving to one of the most expensive cities in Eastern Asia would be expensive, but it wasn’t until I fully settled in that I realized just how much more expensive it was and by extension, how much more I had to earn in order to survive.

If you are moving to a more expensive city in a different country or even the same country, try to find people who have already settled down in the area and ask them if they would mind answering your questions about daily living expenses.

Before I moved to Taiwan, I connected with someone living in Taiwan who had completed her TESOL certification through the same program. She very graciously answered all of my questions about living in Taiwan: how much I could expect to earn, questions she wished she had asked an employer, red flags to be aware of, and how much I could expect to spend on daily or monthly necessities.

Having a realistic idea of how much you can expect to earn will help prepare you immensely by giving you an accurate picture of the cost of living in a new place.

Regardless of your reason for moving to a new city, it is an exciting thing. However, the novelty of living in a new city will quickly wear off. Being aware of these four things (among others) will ensure that you make the transition as smooth as possible.

Note To Self: You Have The Power of Decision