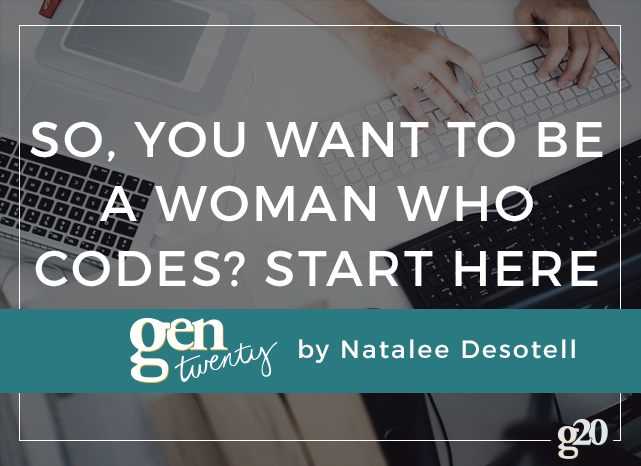 Back in the day, you learned how to color inside the lines with crayons, write your name in cursive, and read awesome books like The Very Hungry Caterpillar.

Skills like these are what created the foundation for our 90s elementary educations. Back then, we couldn’t have imagined a world in which the computer room became every room, the floppy disk was reduced to an icon on the screen, and the curly-corded phones of our youth transformed into hand-held mini-computers.

This article isn’t about the many changes we have seen and will continue to see, though. This is about the new skills that are becoming increasingly important due to these changes. Skills that are a hell of a lot more important than cursive.

Coding is a bit of an elusive animal. Many people have no idea what it entails and assume it’s super complicated, boring, and ought to be left to computer scientists. Maybe there’s a bit of truth to the complicated and boring claims, but we certainly shouldn’t leave coding to the people who are already in computing professions — of which, only 26% were women in 2013, most of them white. While learning to code is not a job guarantee, the number of jobs that require coding expertise is expected to grow.

The more people who know how to code, the more power we have as a society to solve complex problems and create important solutions for the future.

With code, you can create a site as influential as Facebook or a model that can predict disease spread. You can build your own website for an online publication like GenTwenty or make a beautiful personal website to promote your business. It allows you to bring your own voice and creativity to the online world and it gives you the power to manipulate and learn from the mountains of data we have yet to learn from.

Coding is taught in some schools around the world as a basic skill, right alongside reading and writing, but I didn’t even know what coding was until high school. I first came into contact with coding way back in the MySpace days when I would create custom layouts for myself and my friends using HTML. I thought I was pretty cool. Nearly a decade has passed since those days, and now I realize that it was barely the tip of the iceberg in terms of what coding can do. In fact, it was more like the top millimeter of a miles-long iceberg. I’m learning several new coding languages right now for my career, and it is one of the best choices I have ever made. Maybe it’s right for you, too.

Presumably, you clicked this article because you have some interest in coding. That’s fantastic! People like you, who want to expand your knowledge base and make a difference, are so important. But maybe you should slow your roll: the first step you should take is to determine whether you really should learn to code.

Coding is en vogue, many thanks to glamorous Silicon Valley, the popular show of the same name, and the awesome marketing teams at CodeAcademy and Coursera. It’s touted as a skill that everyone can and should learn, but just like any other skill, I don’t think that’s true. Yes, the world needs a lot of amazing nurses and teachers, but can everyone learn to do those jobs well? Not a chance.

If you have a specific reason for learning to code and it will benefit you in your career or help you make a positive difference in the world, I urge you to go for it. If you simply want to learn to code because it seems alright and you don’t know what else to do, then do a little more soul-searching before dedicating time and money to it.

Maybe coding isn’t for you, and that’s okay. You’re still pretty cool to me.

How to get started with coding:

After you determine that you’re a good fit for coding, consult with the people in your field. There is a plethora of coding languages out there, and some fields prefer certain languages over others. For example, HTML is most appropriate for making visually-engaging websites and MATLAB is well-equipped for mathematical and scientific analysis. Along with recommendations from people in your field, do some research about how easy the language is for a first-timer (because maybe it’s better to start with something more digestible).

Next, figure out how you’re going to learn it and stick to that plan. I’ve tried things like Coursera and CodeAcademy and they worked really well with my learning style, but maybe you would do better with in-person instruction or even old-fashioned book learnin’. I find Think Python to be an invaluable resource as a first-timer learning Python; I bet there are similar books out there for other languages.

The easiest part of learning how to code is finding resources. The hardest part is, well, everything else. Ads for programs like CodeAcademy are effective because they make it look easy and fun, but it’s actually incredibly frustrating. I won’t go into specifics here because each language has its own challenges, but I suspect that a few things remain the same throughout: you have to be alright with making ridiculous mistakes, troubleshooting more than you’re actually coding, and feeling like you will never actually get it. There is nothing quick or easy about learning to code unless you’re some type of coding prodigy.

My biggest hurdle while learning to code is dealing with impostor syndrome. I don’t know many women who code and I never pictured myself in that role. When I make mistakes, I have negative thoughts like: “I’m not the type of person who can code,” or “Why did I think I could do this?”  I still don’t know how to turn those thoughts off, but I’m getting better at working in spite of them. The more successes I have (i.e., programs that don’t crash), the easier it is to believe I belong here.

Learning to code, in my experience, is not that different from learning any other type of specialized skill. It takes time, determination, and an unbelievable amount of practice. Sometimes you will feel like an idiot or even question whether you can do it, but if you have a purpose in mind, you will get through it just like the many women before you did.

The career path that fuels your passions may not make you mad money - and that's okay. Here are 6...