Growing up, I always hated the first day of school. Not because of the fact that I would be surrounded by people I didn’t know, but because I knew that a new teacher would not pronounce my name correctly. It happened every year without fail.

One of my first memories is of having my name mispronounced.

A microaggression is defined as “a comment or action that subtly and often unconsciously or unintentionally expresses a prejudiced attitude toward a member of a marginalized group (such as a racial minority.”

With that said, there are several things that happened to me as a result of the microaggressions that I have experienced.

It Enhanced My Feelings of Being an Outsider

Hearing the teacher struggle with the pronunciation of my name every year–the only name they would struggle with as they made their way down the attendance roster–made me hate my name, and by extension, my heritage, with a passion.

I remember one picture day noticing that someone had misspelled my name on the forms for my school ID; I filled out a form with the correct spelling and was told that the issue would be remedied. A few weeks later, my ID came with a spelling I had never seen before, which told me that the form where I had provided the correct spelling, had not been utilized.

Having your name misspelled or mispronounced hurts. It may seem insignificant to some, but regardless of the fact that this is something that is often not intentional, it signals that the person that they don’t matter, that they are not important.

That message can wreak havoc on someone’s self-esteem. 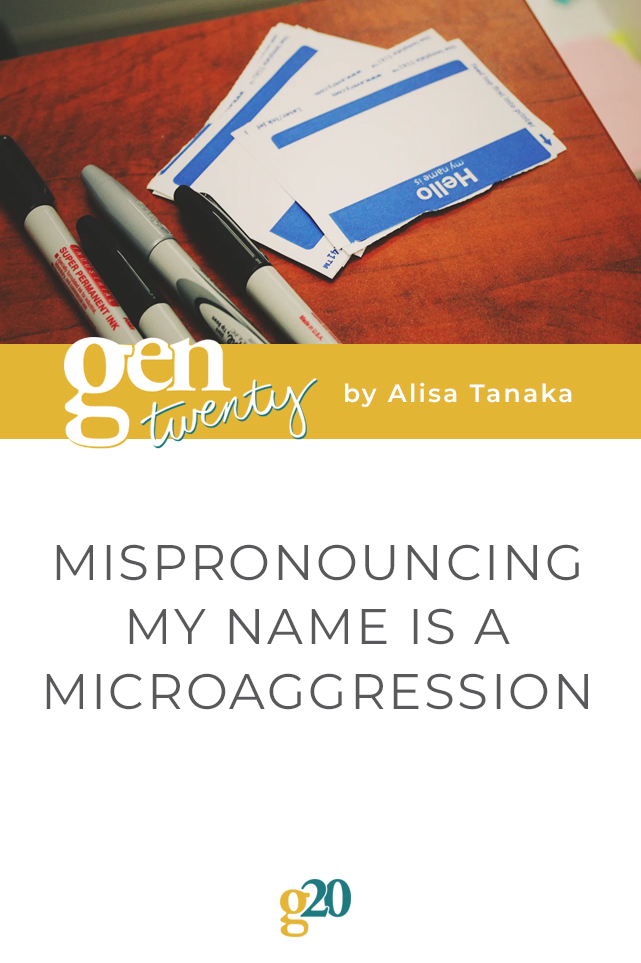 I Wanted to Legally Change my Name

I don’t remember which parent told me that it was legally possible to change my name, but I do remember feeling an overwhelming sense of relief. Of course, this was before I understood what was involved in legally changing your name.

As selfish as this sounds, at the age of 5, I didn’t care about the effort that my parents had put into choosing a name that they had thought would carry over well in both American and Japanese culture; I just cared that I felt like an outsider and that my name was constantly being mangled. I didn’t think they had done a good job of choosing a name because my experience was showing me that my name didn’t in fact, translate well in American culture.

At that age, I saw legally changing my name as a way to alleviate the feelings of being an outsider. To be accepted as American, and therefore avoid the other microaggressions I often heard such as “ Where are you from? You speak English really well!” which made me feel like a foreigner in the country I was born in.

Teaching English in Asia was something that was unforgettable in many ways. Despite the multitude of ways in which the experience enabled me to grow, it also prompted students and parents to question my credibility as an English instructor.

Many of the students’ questions were actually microaggressions. I handled them professionally because I understood that many of them didn’t know what a microaggression was or have the English language ability to understand what a foreigner would consider tactful.

The questions they asked also called into question my language ability and my heritage. I knew that these questions were not intended to be cruel, that they were asked out of curiosity, but that didn’t mean that they weren’t hurtful.

As seemingly innocent as these comments and questions were, these questions greatly affected my mental health, as microaggressions can do. Everyone has different responses to microaggressions. These questions underlined my sense of being a foreigner when I was living abroad, which ultimately made me feel more comfortable with my identity as an American.

In order to avoid the constant mangling of my name, I made the conscious decision to shorten my name in middle school and used the name from that point forward in selective settings. The name helped me avoid the dreaded scenario of having a teacher mispronounce my name.

When I sought out jobs abroad, I made the conscious decision to use my shortened name in all non-official documents or correspondence because my full name is very Japanese, which caused a lot of people to question my heritage. Using a shortened name that was very American allowed me to send the message to clients that I was American and that I considered myself American. By that time, I had become used to using my shortened name, but I know that I am just one of the thousands of people with immigrant parents who were given a non-Anglo-Saxon name.

I am lucky that I was able to change my name out of my own volition, that teachers and other figures of authority never questioned it or pressured me, but I do know that there are others who may not be as lucky.

I Correct the Mispronunciation of my Name Immediately

Whenever I hear my full name mispronounced, I correct it immediately; for the most part, this ensures that the individual who initially mispronounced my name does not continue to do so.

It’s also possible to incorporate the correct pronunciation of your name into a follow-up conversation with the person in question if you hear your name mispronounced repeatedly unintentionally. In my experience, people are more willing to correct themselves if they hear someone’s name being pronounced correctly rather than being called out in a way that can feel like you’re singling someone out.

I Express My Preference for my Nickname When Asked

I always appreciate it when people ask me how to pronounce my name, whether that’s in a job interview or during an appointment. Most of the job applications I have filled out have a Preferred Name section, which I always fill out if the option is there.

When asked, I always express my preference for my nickname. When someone uses my preferred name, it shows me that they have respect, not just for me, but for my choices and preferences.

Expressing your preferences when given the opportunity to do so is always a good idea. Respecting people’s choices also helps create a positive impression of you in their minds.

I Ask People How to Pronounce Their Name

Asking that simple question shows the person that you care about and respect them. They will leave you with a positive impression. Little things like mispronouncing a name can seem insignificant, but little things like that do matter and the frustration can build in the victim over time.

I Use My Nickname When My Full Name Isn’t Necessary

My nickname allows people to recognize that I am American; that simple choice gives me a feeling of belonging, something that I always sought as a child. I never felt like I belonged in this country growing up.

Microaggressions are never a pleasant experience. People who identify as a member of the BIPOC community are experiencing things that many of us can’t imagine every day. I am certainly not unique in having experienced microaggressions or having my name mispronounced.

Having said that, I am hopeful that little things like sharing my experience with the public will prompt others to consider their own privilege, the microaggressions they may have unknowingly experienced, and how to avoid making others a victim of microaggressions in the future.

Jobs That Let You Travel For Free

7 unique ways you can travel for free!