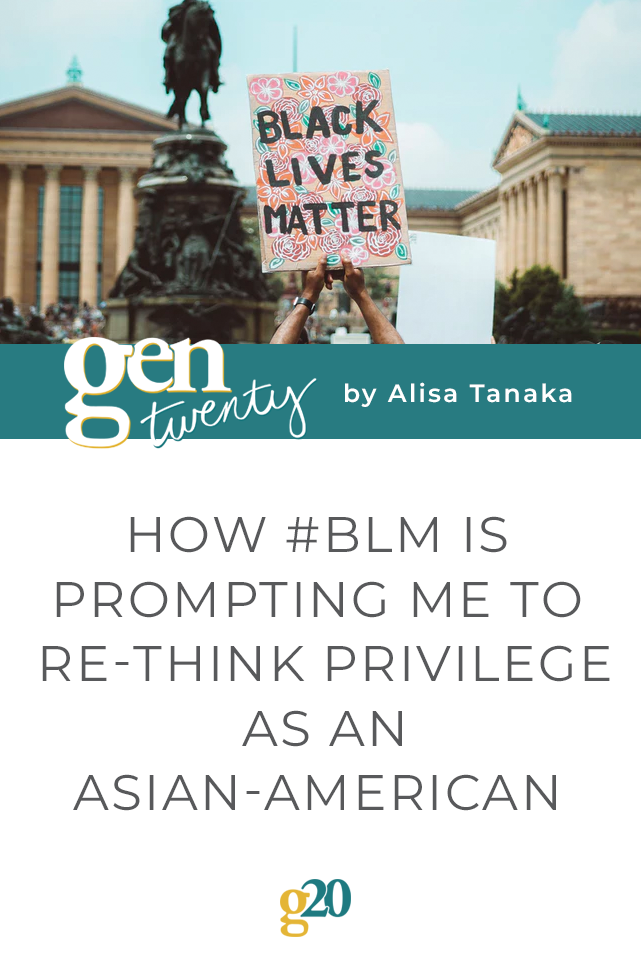 I recently came across a statement from Janaya Khan, international ambassador of the Black Lives Matter movement. Privilege, she said, “isn’t about what you go through; it’s about what you haven’t had to go through.”

Like every Asian-American, I have had to go through various challenges; however, at the same time, there are things that other BIPOC individuals have had to endure that I have not. It is unfair to attempt to draw parallels. Everyone’s experiences carry an equal amount of weight.

By the same token, each of our respective opinions and experiences, both of this pandemic and the #BLM movement, are unique. Here are some ways that the Black Lives Matter movement has prompted me to reevaluate privilege.

I Am Starting to Understand the Importance of History

As the daughter of a history professor, I have always enjoyed history, but as a young girl, I never understood the connection of the past to the present, despite my father’s attempts to explain it to me. Recent events in the #BLM movement and watching the news has prompted me to contemplate how it is that we got here, which has prompted me to learn more about American history.

As a result, I am becoming more aware of the importance of history in general.

In writing this, I am sharing my dedication to continue to educate myself on the topic of privilege and remain cognizant of the role that history has played in the modern world.

I Am Reflecting on My Own Biases

I recently had a conversation with a friend who worked in a managerial position for several years. She mentioned that she very rarely had an interview with a Black applicant, and that, in response to staff and superior’s comments, hired more male employees than female. This conversation, and the #BLM movement has prompted me to consider how the comments and views of others have influenced my actions.

As an 18-year-old ESL classroom aid, I didn’t understand much about the Middle East. To say that I was shocked to be told by two young Saudi Arabian students that I “had to” get married because I was 18 mere weeks after I had met them is an understatement.

Similar incidents in the classroom consistently rubbed me the wrong way and prompted me to make sweeping generalizations about Saudi Arabian men: that they were rude and disrespectful. I consciously distanced myself from them because I was uncomfortable.

Over time though, I learned that “women remain legal minors when it comes to marrying, living on their own, and other matters.” Knowing that, I began to look at these students differently; they had never met someone like me. I went directly against everything they knew. At the same time,I had to be patient with them. I had to listen to them to understand them. Arguing wouldn’t get me anywhere.

As a friend told me during a recent conversation, “It is difficult to call yourself out about these things; they’re uncomfortable.” Addressing these things is a gradual process. It is unrealistic to expect that you will be perfect; all we can ask of ourselves is that we work on these things. Being aware of them is half the battle.

Having spent the last two years in East Asia, my interest in Asian and Asian-American affairs has naturally strengthened. However, I am making the conscious effort to diversify the content I consume and learn more about the experiences of different groups of people.

This does mean consuming books, podcasts, and the like, but this also means reaching out to friends who identify differently, and listening to their experiences in an effort to understand. While one individual’s experience cannot and should not be a stand-in for all individuals in a particular group, learning about one individual’s experience is certainly a start. I should add that I do not regard it as my acquaintances’ responsibility to educate me; that responsibility rests with me.

By consuming content from creators who are not part of your immediate community, you expose yourself to different viewpoints and expand your worldview. While you may not necessarily agree with someone’s views, the willingness to listen can go a long way.

There is no denying the fact that #BLM is an incredibly important movement. I am hopeful that people around the world will continue to discuss this once a new hot topic takes over. Perhaps even more important, I am hoping that we will see lasting change as a result of this extremely chaotic time.

More in Self Development, Social Awareness

14 Quotes To Live By From “Hello, Fears” by Michelle Poler

Hello, Fears is full of actionable, tangible advice for stepping outside your comfort zone.