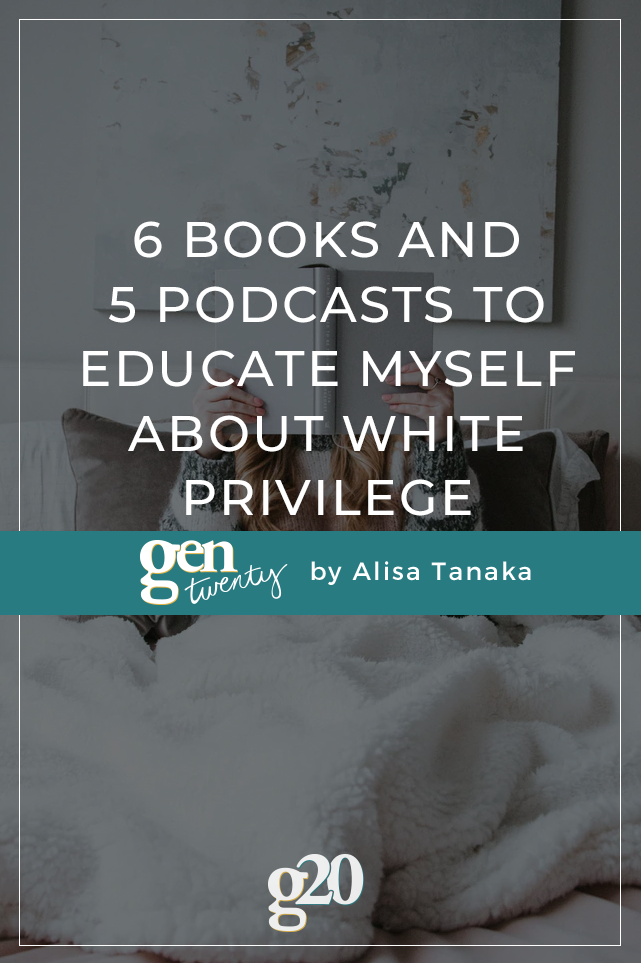 We at GenTwenty recognize that we can be doing more to be allies and to be actively anti-racist in this world. In a step towards that direction, it is my job to educate myself about white privilege. In the words of Ayana Wyse, photographer and event organizer,

“What we have here is a simple matter of human rights, which makes it a problem for everyone. If Black bodies are dispensable, then we as an entire human race are dispensable — and that must change.”

Echoing Ms. Wyse’s words, thousands of people around the world have taken to the streets to take a stand against police brutality; at the same time, books about the contemporary racial landscape have flown off the shelves of bookstores.

As I write this, the book White Fragility by Robin DiAngelo (a white woman, notably) has spent 12 weeks on the New York Times Bestseller List in the non-fiction category, followed closely by So You Want to Talk About Race by Ijeoma Oluo and How To Be An Antiracist by Ibram X. Kendi (all three of which are also on my reading list)

6 Books and 5 Podcasts To Educate Myself About White Privilege

New additions to my (already extremely long) to-read list to educate myself about white privilege include:

Black and British: A Forgotten History

Since reading the book The Good Immigrant, an anthology of writings that revolve around British authors’ experiences as POC in Britain, I have become increasingly interested in the experiences of British individuals. This book in particular (at least according to the summaries I have read online) goes in depth about the role that black individuals played in shaping the Britain that we know today.

Natives: Race and Class In the Ruins of Empire

This book, written by a BAFTA award-winning political commentator, traces Britain’s imperialist origins. I will freely admit that I am a bit of an Anglo-phile and have long seen the UK with rose-colored glasses. I am eager to read this book in order to learn more about Britain’s history and hopefully, how that history has played a role in shaping the experiences of British POC.

This Muslim American Life: Dispatches from the War on Terror

This book is a combination of personal experiences and academic research that details the war on terror for Muslim Americans. I hope that this book will allow me to begin to understand the experiences of Muslim-Americans during that time.

The Hidden Rules of Race

I want to read this book in order to learn more about how the US economy was built and how that structure has contributed to inequality. I hope to expand my knowledge base and become aware of the structure of the American economy.

I was lucky enough to study abroad in Australia  and work with people from the aboriginal tribes of Australia for a short time. Studying Australian history made me aware of the appalling treatment of aboriginal Australians, and opened my eyes to the discrimination that continues to affect their lives. This book (and the film that was adapted from it) are considered Australian classics. I hope to gain a different perspective of Australian history by reading this particular book.

Notes of A Native Son

Written by James Baldwin,  this book is a collection of essays that the author penned during his twenties that explores the complexities of growing up in the US during the 1940’s and 1950’s. I am hopeful that this book will broaden my understanding of the racial prejudices that African Americans experienced during that time.

Podcasts I am listening to to educate myself about white privilege:

For those of you who aren’t big on books, I’ve got you covered. While it’s difficult to point to one podcast as THE podcast to educate oneself on the topics of systematic racism and privilege, there are several podcasts that produce content that are well-researched and informative.

With that in mind, here are some podcasts that I have found informative (or hope to begin listening to consistently).

This one is by far one of my favorite podcasts. Topics of discussion include, but are not limited to DACA, immigration, and segregation in schools. I appreciate the variety of topics discussed; the common thread between all of these conversations is that of race.

The New York Times touts this podcast as “ the biggest stories of our time, told by the best journalists in the world.”

Recent episodes that I have found useful include:

I have made no secret of the fact that I am a Brené Brown fan. She has interviewed some fantastic people on her podcast, including Ibram X. Kendi, and Laverne Cox, the former of whom discussed transgender representation and advocacy, something that I personally found enlightening as a person of color who is working on being a better advocate for others.

This is a podcast that I have heard great things about, but have yet to listen to. I am particularly interested in the multi-episode series Seeing White. It looks at the “roots of white supremacy” and MEN, which delves into the “past and present of sexism and patriarchy.”

Yet another podcast that I am eager to add to my library. With a summary that promises that each episode will allow listeners to  learn from “thought leaders, authors, creatives, and more about the diversity gaps in society and culture,” I’m eager to learn from this one.

This is an evolving time for everyone, and it is important to educate ourselves as much as possible as we move toward a new — and hopefully much improved — normal. If you have any recommendations for useful podcasts or books, please let us know in the comments below!

How the Pandemic Has Affected My Long-Term Plans

My long-term goals are little off track, but I'm still hoping for the best moving forward.