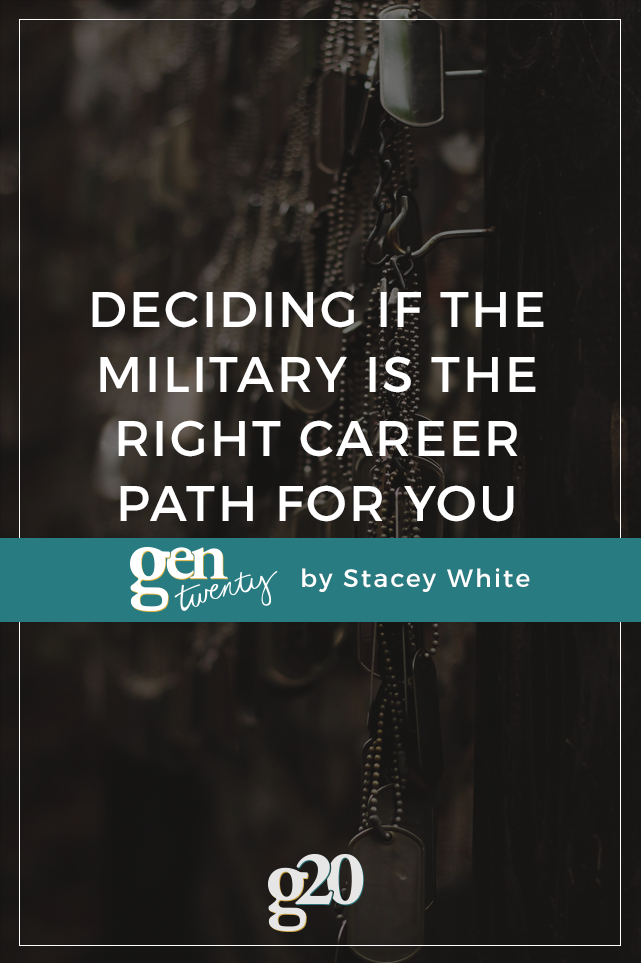 Choosing a career isn’t easy if you don’t want to sit behind a desk. The majority of jobs involve office work and it can be boring. For those you want excitement, 40 years of administration isn’t going to cut the mustard. In fact, it might drive you crazy.

Thankfully, there are careers which ooze excitement, such as joining the armed forces. From fighting wars to helping with humanitarian aid, there is never a dull day. Still, excitement isn’t a good reason to join the forces because of the risk to your life.

These are the things to consider before you sign on the dotted line.

People who serve are responsible for the country they protect and the ones they swear to defend. It is hard to take that oath seriously if you are looking for a quick paycheck.

Past and present members of the army believe that a person has to be passionate to protect and serve. Anyone who is looking for a comfortable lifestyle isn’t going to last very long because it’s a hard life, physically and mentally.

So, what you have to decide is whether the thought of joining is cool, or whether there is a fire in your belly. If there isn’t a smolder, it’s evident that becoming a soldier isn’t a savvy career decision.

There is a myth that modern soldiers don’t go to war nowadays. Try telling that to the people who served non-stop in Iraq and Afghanistan. Some people have spent longer away from home on tour than they have in barracks.

This isn’t supposed to scare you, but prepare you for the inevitable. At some point, there will be an outbreak with the current political tensions. As the country’s first responders, it is your job to meet the tension head-on and fight for freedom. The people who don’t want to be in a hot, unwelcoming country with hostile enemies should think twice. After all, war is pretty barbaric even in the age of modern warfare.

Home Is Where The Hat Lies

Indeed, countries have postings around the world so you might not be on the same continent. For those looking for excitement, this is more appealing than it is unattractive. Who doesn’t want to work and travel at the same time?

The individuals with a family and children will have to think about the potential sacrifices. With different stations and the possibility of war, time away from home is likely. In truth, you might have to relocate and call somewhere else home.

Health and fitness are important in life, but they take on extra meaning in the forces. The people who aren’t fit enough aren’t capable of protecting the country.

So, the army, navy et al. put their recruits through their paces. That’s an understatement because they push them to the brink and back. It’s hard to gauge until you take the tests, but there are indicators.

This review of Body Beast workout, as well as the ones for the Military Diet, will give you an insight. Not only does it focus on the physical training, but it also emphasizes the food and commitment aspects. Running a half marathon with a weighted backpack is hard, but cutting out junk food is just as bad. Anyone who thinks that is facetious has never attempted a long-term diet before. Also, fitness is essential because they won’t accept your application if you are unwell.

Another myth to consider is that the forces spoon feed their employees. Sure, there is a high level of organization throughout the different disciplines. If there isn’t, then people get hurt. However, your commanding officer won’t hold your hand and tell you what to do and when. They aren’t primary school teachers but COs who make sure you are ready to fight.

If you lack initiative, you won’t get anything out of the experience. For one thing, the forces don’t promote people who can only take care of number one. As a result, the chances of career growth are slim. Just as importantly, the army can set you up for life with different qualifications and courses. Anyone who isn’t ready to put in the work will leave with very little and no safety net.

Essentially, it’s important to consider how the above make you feel. If the feelings are positive, you should move onto the next step. If they are negative, it’s a sign that the army is a bad move.

Finding purpose in the mundane will require self-exploration, including asking yourself some tough questions.