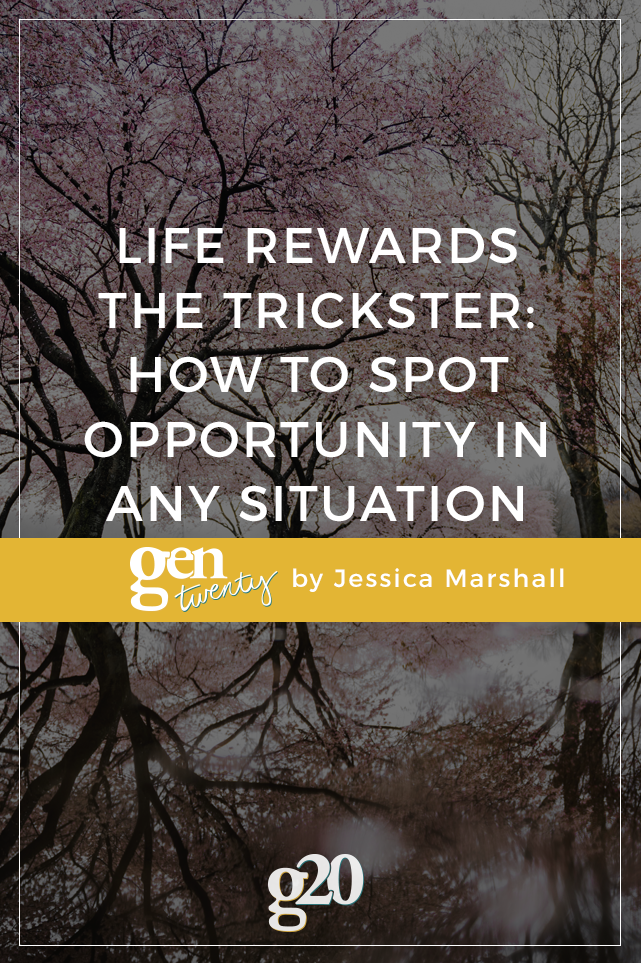 I read something that changed my life.

And that thing was written by one of my favorite authors of all time, Elizabeth Gilbert. She said,

“It’s better to be a trickster than a martyr.”

The martyr is someone who dwells in misfortune indefinitely. But the trickster is someone different.

Who is the trickster?

The trickster is a character in a story that has great knowledge and uses that knowledge to defy conventional behavior and rules.

So the trickster is an opportunist. When something unplanned or unfortunate happens, tricksters roll with it. Not only do they roll with it, they bend conventional rules to make it work for them. They figure out how to make money from it; they use it as fuel.

The trickster is playful and clever. She doesn’t take life too seriously. Because she is not deeply attached to any outcome, the trickster can quickly adapt to any situation the universe throws her way. And she does so with a sly smile.

As Elizabeth Gilbert said, “she is always looking for the secret door, the hidden stairway, the fun-house mirror, the sideways way of looking at things — and the trickster always endures.”

What would life look like if you were the trickster?

I’ll give you an example from my own life.

About two years ago, my sister and I’d both been working at unsatisfying, uninspiring, and painfully-boring jobs.

So we started planning a trip — a week-long trip to Greece. We spent days poring over travel blogs, ooh-ing and aah-ing over gorgeous hotels, and searching cruise tours in Santorini. We felt excited about life again!

But something went wrong.

When my sister requested time off of work, her boss turned her down. Her co-worker had already asked to go on vacation those same exact days!

READ MORE  4 Signs Your Relationship Is More Than "Just Friends"

We were devastated. We cursed our bad luck, we moped around our house, we vented to all of our friends.

Then, my sister unknowingly donned her trickster cape: “You know what? Let’s take a damn trip. Let’s quit these jobs in September, and live in Chile for a few months.”

The universe had just sent us a tennis ball of opportunity — disguised as a setback. And we played back!

We hit that ball right back to the universe. We bent the “rules” and made this setback work for us.

I noticed the trickster persona in someone else, too.

In the most recent bachelor, Nick Viall.

Stick with me here.

He was on two seasons of the Bachelorette. Not one, but TWO. And for those of you who watch the show, you know what happened. He finished as the runner-up in both seasons. That’s right — brought right to the end twice and …nada. No love for Nick.

Yeah, he was disappointed. Bummed. Brokenhearted.

But eventually, he morphed into the trickster. His wheels started turning: How could he make this work for him?

He used his unique story of being the runner-up TWICE and went on the spin-off show, Bachelor in Paradise. He won over the fans and got cast as the next bachelor. He’s now happily engaged (for now, at least), made it to Week 7 on Dancing With The Stars, and quickly thereafter, launched a men’s clothing company.

Talk about turning a potentially embarrassing reality-TV stint into a wave of momentum! He slyly and cleverly used his not-so-successful past on the Bachelorette to propel himself forward.

Thinking about these two examples, how can you embody the trickster in your life?

1. Ask yourself on a weekly basis, “WWTTD?” What Would The Trickster Do?

Jot down ways that you can make the most of your current situation — right here, right now.

Doing this often will shift your mindset and tap into your creativity!

2. Take the time to feel disappointed.

I know, I know. This piece of advice sounds counter-intuitive. But in order to truly morph into the trickster, you’ll have to move past the disappointment.

In order to move past it, you’ll need to genuinely feel it first. So take the time you need to feel bummed, disappointed, angry, frustrated, upset, whatever. And then you can move on to the fun, playful part of the process!

Related: Realigning Your Expectations When It Comes To Dreams vs Reality

3. Surround yourself with other tricksters.

The best way to channel the trickster energy is to surround yourself with other tricksters. Their outlook on life will start to rub off on you!

Chances are, you’ll be able to identify the tricksters in your life pretty quickly. They may look like entrepreneurs, travelers, or writers. Or people who have tons of friends, people who are spearheading projects, people who are passionate about something.

READ MORE  5 Ways to Overcome the Fear of Studying Abroad

If you can’t find any tricksters in your personal life, I recommend you immerse yourself in the work of Tim Ferriss, Benjamin Hardy, Elizabeth Gilbert, Anita Moorjani, Glennon Doyle-Melton (now Glennon Doyle-Wambach), and Ramit Sethi. They will give you the trickster inspiration you need!

Related: 12 Quote to Live By From “Big Magic” by Elizabeth Gilbert

4. Maintain a “trickster tracker.” In other words, keep your eyes and ears open for interesting opportunities.

For instance, one of my friends on Facebook moved to a gorgeous apartment in Mexico for an incredibly affordable price. I wrote that information down. If you see something that piques your interest in any way, jot it down and come back to it later.

5. Write a note to your subconscious mind before you go to bed.

According to Harry Carpenter, author of The Genie Within, your subconscious mind can help you solve problems, even while you’re asleep.

You see, the brain never sleeps. By giving a problem to your mind to solve before bedtime, you can wake up with newfound clarity, with fresh ideas.

Life rewards the tricksters, and remember, according to Elizabeth Gilbert, they always endure.

How do you plan on being more like the trickster? Let me know in the comments below!

Jessica Marshall is a writer, breakthrough-guru, and the co-founder of Your Velveteen Life.  Joined by her sister, Shannon, she’s on a mission to help millennial women achieve their goals in half the time through the power of intentional travel. Go to their website, www.yourvelveteenlife.com, and get their free, word-for-word scripts to wow your friends and family when they ask you that dreaded question, “So what have you been up to these days?”

10 Things To Do To Have an Adventurous Summer

Even as grown ups we can still have an adventurous summer, get out of our comfort zones, and make new...