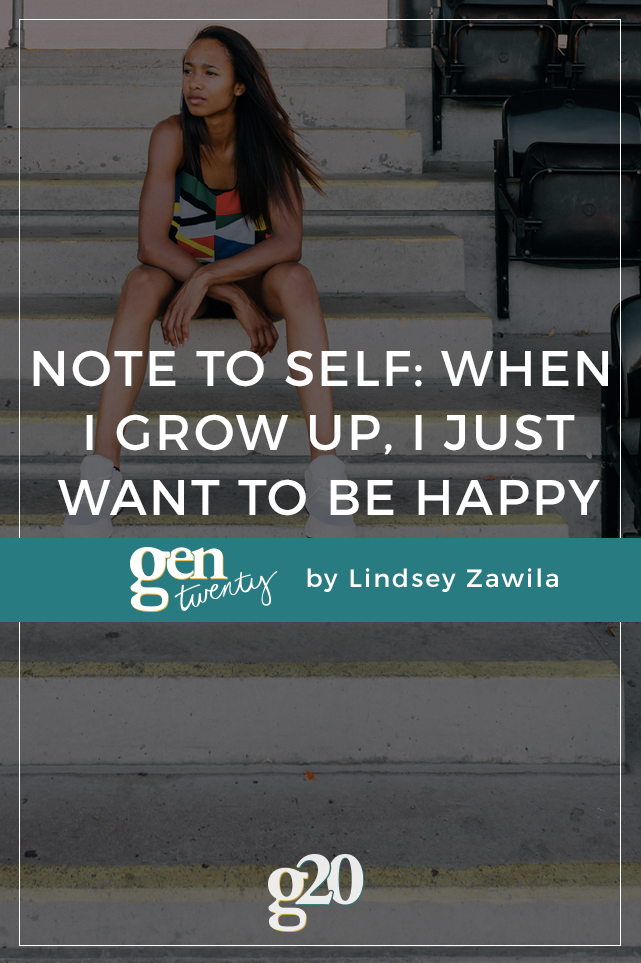 “What do you want to be when you grow up?”

When I was kid, I was asked this all the time. Whether in school or at family events, it was the primary question to ask a kid. As a kid, my high achieving family spoon-fed me responses that included “doctor” and “lawyer.” At one point, I branched out to “pharmacist,” but that was the extent of allowed life goals at that age.

When I reached high school, the question altered a bit, though overall remained the same:

“What do you want to study in college?”

There were some questions about where I wanted to go to college, but every decision had to be based around what I wanted to do. By the end of high school, I was convinced that I wanted to do something technologically focused. My answers were in the sphere of “technology,” or “information science,” or some sort of “business technology.” Depending on these answers, seemingly knowing adults would comment on which schools I should be looking at based on the school’s specialties.

In reality, I had no clue what I wanted to do.

Most of us don’t at that age.

I ended up in the Division of General Studies at my university. My major: Undeclared. This gave me the opportunity to take whatever classes I wanted. I learned that I was interested in the social science fields and did not want to go to law school, but instead wanted to travel the world and learn as much as I could.

By the end of college, I declared a Global Studies and Communications double major.

Which led to the next seismic question that seemingly knowing adults would ask:

“What are you going to do with that?”

When I was extra sassy, my response would be something along the lines of:

“Something awesome, you just have to wait for it.”

In truth, I just didn’t know. But liberal arts majors end up in a multitude of different fields with a variety of different roles. My internships brought me to human rights, editorial writing, government, and then media. I found jobs that I could do with my major and my skills, despite what everyone believed.

There was just one glaring problem:

I was not happy.

As a kid, I responded to life questions based on what I knew my family wanted me to say. As a teenager, I chased the life I needed to continue to fit into the world I grew accustomed to. As an adult, I refused to acknowledge that this life was slowly killing me.

Until there was no other choice.

Society’s expected 4-year bachelor’s degree was costing me my sanity.

I graduated early not because I was particularly intelligent or diligent, but because I feared the price I would have to pay if I stayed the full four years.

This extra time graduating early gave me an opportunity to recover from some of the harsh side effects of living. For once, there was no pressure to decide on anything for certain. I was months ahead of my peers, and I had already proved capable of landing some pretty impressive internships. For the first time possibly ever, there was no pressure to know exactly what was going to happen. So I found a bartending job to keep busy and keep an income coming, and the rest of my time living spontaneously for the sake of living.

And I found that this is the happiest I’ve been in a while.

Which brings me to the present gargantuan question that currently plagues me:

“What are you doing?”

Anyone that needs to critique my life doesn’t need to be part of it.

I’m the only one that has to live by my decisions.

Every colossal question through the phases in my life have the same answer. From when I was kid being asked what I want to be when I grow up, to when I was in college trying to decide what I wanted to do, and being an adult now with no idea what the future holds.

The answer is the same:

Happiness is going to vary from person to person.

The sad truth is that not everyone chooses happiness.

Just like so many other things in life, happiness is a moving target. It’s going to take time to find, and it’s going to change over time. Our priorities in life will change as we get older, and what mattered most to us at 21 is going to be different by the time we turn 35. None of us knows for certain what the future holds, not even the seemingly knowing adults that continuously interrogate us. They mean well, they just struggle to admit that uncertainty still scares them.

The truth is, most ‘adults’ don’t even know what they’re doing.

I’m still growing and learning with everyone else. Just like everyone else, I don’t know what the future holds, and I don’t have the answers.

But my answer to the monumental questions that haunts every stage of my life is essentially the same:

10 Reasons Why Every Writer Needs To Be a Reader

The best writers are avid readers.