Women who know my story have asked me how I reconciled a chaotic childhood with a mother who created most of the chaos. How did we go from that to the loving mother-daughter relationship we enjoyed in later years? “I grew up,” is one answer — but there’s definitely more.

The deep roots of the unique love between us were always there, and both of us lost sight of them during my adolescence and young adult years. I think of us back then as two swimmers in adjoining lanes at a community pool, aware of a possible collision, and silently stroking through our rancor. Because there was a strong bond that held, we would eventually shift into our mother-daughter relationship to the more loving mother and the less hostile daughter.

We were like that old nursery rhyme: When we were good, we were very, very good, and when we were bad, it was horrid.

When I was a young married woman and then a young mother, we grew apart — both physically and emotionally. I lived in California, my parents lived in Missouri.

When my parents came for a visit, my mother’s focus was on my daughters and the role she was eager to play as grandmother. I was eager for a new role as well, as a “someone” with a career and returned to college and later to graduate school. 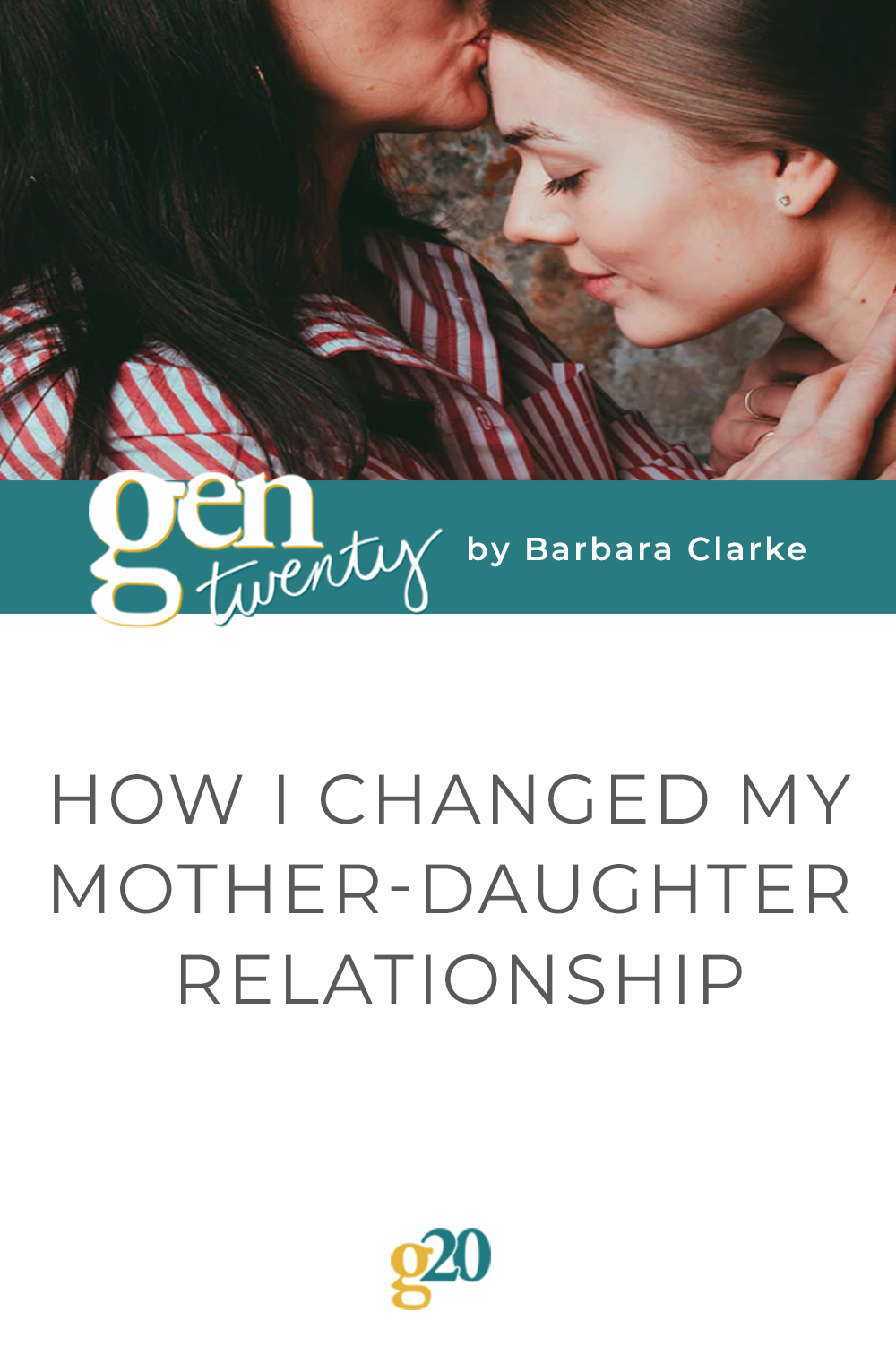 My parents’ lives were also changing: They moved to California only a few houses away from where we were living, my father retired due to ill health, and my mother loved being both close by and often incredibly helpful to me. It was wonderful for my daughters but sometimes challenging for me.

I felt I was redefining myself and didn’t want my mother’s eyes and commentary on what felt like a vulnerable time in my life. I was once again trying to be more myself and still be a loving daughter.

We had wonderful times and then hit a rough patch, often being accused as in my childhood, of siding with my father. And he was only too happy to play the victim, the misunderstood husband. I had to once again fight my childhood instinct to make everything right for everyone.

In summer 1981, at the age of 40, I fulfilled an internship requirement for a master’s degree by working in a remote village in Kenya. To say it was a life-changing experience doesn’t do it justice. I was welcomed into the village, worked in the hospital, and kept a journal of the small and larger wonders of being there.

One incident that summer would forever change my heart. I carried two photos of my daughters and one of my mother and shared them with the women and girls in the village. They would look at the picture of my mother with our dog on her lap and smile.

“How old is she?” they always wanted to know.

“In her early 70s,” I said and could see how living that long was for them a marvel. I felt tears forming of both pride in who she was — active, smart, and funny — and missing her.

And, several months later, my mother said, “I missed you and worried that I’d never see you again.” Absence does make the heart wake up.

In 1989, newly divorced and with both daughters on their own, I went into therapy to try to understand why I had failed at two marriages and was once again at odds with my mother.

She resented my “freedom,” as she called it. When I asked for consideration, that I needed to take time away from my parents to understand the unhappiness I was experiencing in my life, my mother erupted.

What I craved was to be given the understanding I was asking for. What I received was her blast about being selfish.

After two years of not seeing my parents except for exchanging Christmas and birthday greetings, I had enough time and distance to see what I was missing. After my father’s death, I wanted my mother in my life.

I had done quite a bit of growing up during that time and didn’t see that it was my job to forgive my mother for the past. It’s hard enough to forgive yourself. By then I’d had to ask for understanding from my own daughters on more than a few occasions.

I was also tired of the drama; therapy had wrung it out of me. What I wanted was to pull as much of my family — mother, brother, and daughters — back into my life and give them all the love I was capable of giving. Unconditional love and understanding.

When I showed up at my mother’s door and invited her to go to the beach where we had always had good talks and laughter, she seemed relieved and ready. On our first afternoon back together we committed to never losing whatever we had and to try to make it better. On that afternoon on the beach we were both mother and daughter as well as two women who treasured their friendship.

Until I was the age of my mother, how we found those roots again and our mother-daughter relationship bloomed was a bit of a mystery. Now I understand and wish she were still alive to do more celebrating with me — hard won with more than a few setbacks.

My parents’ long, miserable marriage, to which I was often a witness, was one obstacle until my father died. His passing gave my mother the freedom to live the life she always wanted — rich with friends, family, and beloved for her sense of humor and amazing manicotti! I admired her courage and zest for life.

It took almost a year before I felt strong enough to risk what I knew to be true and might be doubted by Mom. I remembered months earlier sitting in a café with her when she said, “I didn’t know you were so smart.” Rather than bristle, I smiled and said that I had inherited “my smart genes” from her. I understood at that moment that it was up to me to keep our mother-daughter relationship moving forward.

I had spent months in therapy finding my way through the process of recovering from trauma, grappling with my undeserved shame, and rebuilding my emotional life. I knew my own vulnerability in how much was safe for me to share and what to keep private, including details about my therapy sessions.

When I felt I could deal with her not believing me, I told her what had happened, that I had uncovered a memory. That at the age of 6, my father betrayed a fundamental trust, swore me to secrecy, and broke my heart. That early sexual event stayed buried until I knew that my suspicions warranted getting professional help.

She was horrified at “having been married to that man” and not particularly focused on how the single event had affected me. Fortunately, that’s not what I needed.

She believed me and neither one of us brought up the topic again. The rest of my recovery I could do on my own.

What I needed then and treasure now was having a funny, smart, sometimes self-involved, smart-ass, loving mother. I suspect that she would say she got from me what she wanted. I became a loving daughter and always happy to talk about two of her favorite topics: sex, especially for older women who’d endured unsatisfactory marital relations, and the women’s movement.

We could cover both subjects walking on the beach or over a glass of wine. “Inquiring minds want to know” she would say and launch one of our chats.

For the last 20 years of our time together, we became more like free-style swimmers — one doing the backstroke, the other the crawl. Whenever we bumped into each other, we either settled the issue as best we could, let it go, or laughed it off. I miss her still.

Barbara Clarke has received many labels through the years, some unwanted: ”Best Body” in the ninth grade and ex-wife twice. In mid-life, she worked in Kenya, later as an executive, and moved over 60 times. A mailperson told her that she held the local record for the most forwarding labels of someone not fleeing the law: three. Most recently, she was given a label she treasures, “Most likely to start a forgiveness movement,” earned in a class developing her memoir The Red Kitchen.

29 and Feeling Fine: How I’m Approaching the Last Year of My 20s

This decade has taught me so much and I am forever grateful.