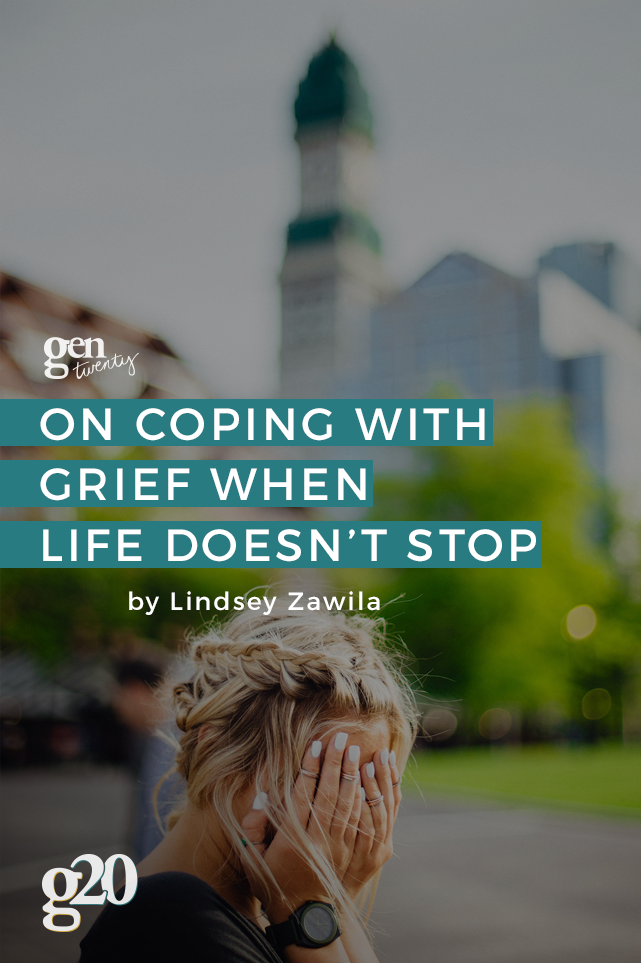 There are many types of loss in life. We can lose our friends, lose a meaningful relationship, lose our family, even lose sense of who we were. All must be grieved in its own way, and although the grieving process will differ for everyone and every scenario, there are similarities between losses.

I have been through all of these losses. But so have so many other people.

In this particular article, I’m going to focus on the literal loss of my grandmother. She died during my third year of college. I didn’t know how to cope when I was feeling this loss so profoundly while everyone else continued on like nothing happened..

My grandmother lived with my family for over ten years while I was growing up, acting like another parent to me. As a kid, I used to help her with the housework or gardening. As she grew older, I would sit with her and watch TV with her, just keeping her company. And then I watched her health decline slowly and painfully. I was in high school at the time.

Considering her declining health, her passing didn’t come as a surprise. In fact, the timing was as perfect as it could have been. I had just gotten back from a winter study abroad trip to India. My cousins were still on winter break for high school and college, and my brother was living within a couple hours away. All her grandchildren were able to attend the wake and the funeral services.

Unlike the other grandchildren still in school, my semester began just before the funeral. I went to campus for a week, returned home for the funeral during the end of the week and weekend, and then went back to school.

Just as if nothing happened.

As expected of the campus community, everyone was excited for the new semester. Students were going out for syllabus week, instructors were getting everyone pumped for their courses–and I just wanted to curl up and hide. Someone in my family had literally just died, and almost nobody seemed willing to give me a break. I had an unfortunate social group at the time that lacked understanding. Only one instructor let me miss class based on my word. A couple instructors needed proof, and one class harshly did not excuse any absences.

I silently vowed to go to that class with a contagious infection, if things came down to it.

After the funeral, I brought back a copy of the obituary and went through the Emergency Dean for an official excusal of absence. The obituary wasn’t in English, but the Emergency Dean was understanding and accepted my rough oral translation of the document. While it is understandable to require proof, it is extremely exhausting emotionally to explain time and time again that I wasn’t in class because someone in my family had died.

There are the stages of grief, recommended coping methods, and then there’s reality. In my reality, I had no tolerance for the textbook formula of grieving. I haunted by guilt and sadness, I cried every night for about ten days straight, and I was not pleasant to be around. I didn’t choose healthy ways to cope, and I didn’t care for my well-being. I was so guilt-ridden that I believed I deserved the physical torture that mirrored my mental suffering, and somehow justifying my crazy and irrational behavior.

This lasted weeks after the funeral.

But the Dean’s official excusal only applied to the one day I missed for the wake. There’s no excusal for the rest of the grieving process.

Life won’t stop for you. Life cannot stop for everyone. If it did, we would never get anywhere.

It does get easier over time. My daily nights of tears turned into every other night, which slowly became weeks. My birthday was several weeks after my grandmother’s death, and I remember trying to reconcile having fun and being happy in a world where she no longer lived. I stopped physically torturing myself when I realized that some people were seriously concerned for me. Part of my justification was that I was the only one getting hurt, but that was no longer true.

Without being able to justify my unhealthy actions, I was forced to change my behavior. As days turned to weeks and weeks into months, my grieving came to a close and I learned to live in the present again.

Grieving is a necessary part of life. It shows that whatever we had was meaningful, and that we cared. It’s a strength to care, though it also means we must grieve its loss.

Grieving is necessary. It shows that whatever we had was meaningful, and that we cared.

There is no right way to grieve. As long as no one is getting hurt, you are not wrong. Just because you are suffering, it does not give you the right to hurt anyone else. This doesn’t mean that you need to choose the perfect textbook methods of coping either.

Do whatever you need to do to get through things.

No one knows exactly what you are going through. They may try to relate and understand, but no one will really know. None of us can know someone else’s grief exactly as that person is suffering it.

Therefore, no one has the right to judge.

Life moves in one direction, but everyone lives at their own pace. Everyone grieves as they need to.

As long as no one is getting hurt, whatever you’re doing is not wrong.

Life moves in one direction, but everyone lives at their own pace.

4 Benefits of Having Your Own Online Business

Having an online business may be for you if you crave freedom and creativity.