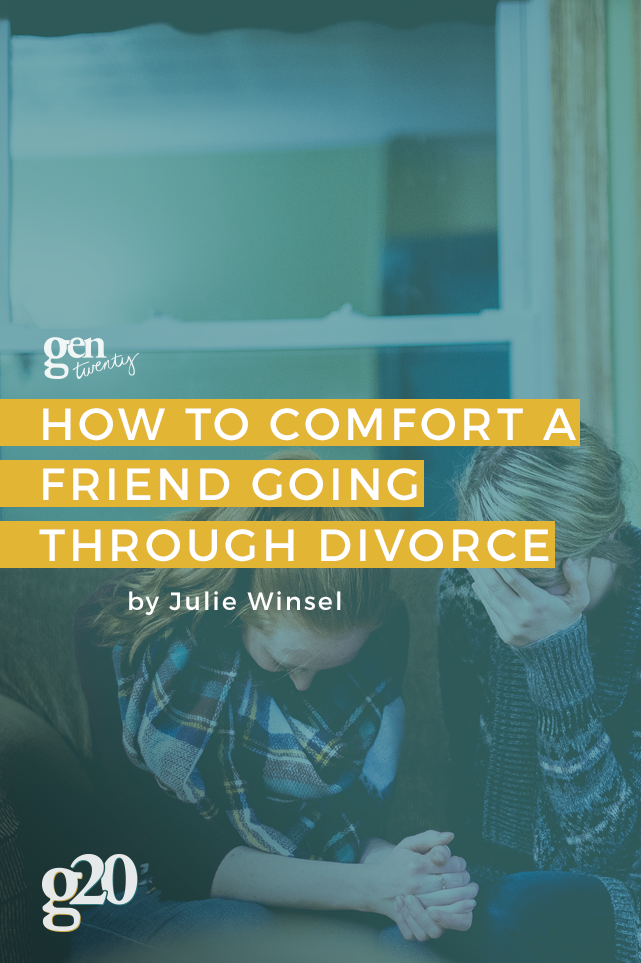 We are at the age where marriage is everywhere. Our summers are spent surrounded by white and our dashboards are packed with pastel-tinted photos. It’s an exciting time.

Until those marriages end.

A couple months ago, my friend told me and my husband that he and his wife were getting divorced. We were shocked. We had considered them our closest “couple friend” and had even been in their wedding not nine months before. He was devastated and we were at a loss as to what to do.

Divorce happens. And it sucks and hurts and sends out waves of uneasiness. But now is the best time for you to support your friend and help them get through one of the roughest chapters of their life.

How to respectfully comfort a friend going through a divorce:

1. Understand that you don’t know the full story.

Unless you have been with them every second of every day, no one has any idea what goes on between a long-term couple. Still, it’s easy to make judgements about what you hear and everyone else’s opinion. You may even develop your own opinion.

Do your best to not do this. Understand that you are going to hear a lot of things, maybe even from members of the couple, but that you will never know the full truth and where the breakdowns were in their relationship.

2. Don’t press them for details.

When my friend first told me that he and his wife were getting divorced, my first reaction was to ask, “Why?” I instantly regretted this. Instead of coming off as caring and compassionate, I came off gossipy and like I wanted to know all the dirty details, which wasn’t my place. It was just my reaction, but I didn’t feel good about it.

As you continue to be with your friend through this process, don’t ask for details. If they want to talk, they will. Divorces are emotional and exhausting and someone going through one will want to let out their feelings. If they don’t, they’ll explode. But you’ll only hear about it if they feel you are a safe person.

On that note, if they do tell you something, remember they are trusting you with that information and do not tell anyone else. It is not your news to tell.

Unless it was a terrible situation where there was abuse involved (which is a very different kind of situation and I am not the person to give advice on that subject), do everything you can to not pick a side. Stay neutral and stay empathetic.

The temptation is to instantly say everything you’ve ever thought about their ex. Now is not the time for that. I’m going to tell you right now that there probably won’t ever be a time for that, but especially right now. Exes are a sensitive subject, especially in the case of marriage or in any long-term relationship where one member of the couple was blindsided by its end.

Often there are still feelings, on both sides. While they might not ever get back together, they will probably still be in touch as they work through breaking up the life they had built together and there is still a relationship there, no matter what the tension might be. The second you start ranting about one is a second that the other is going to stop trusting you.

4. Understand divorce is a process.

With divorce, there are quite a few more strings attached. There are legal issues, possession issues, money issues, and personal baggage that all needs to be unpacked. And all that takes time.

There’s no such thing as an easy and purely cordial divorce. It is a process that involves lawyers, bankers, and pissed off family members. It’s not as easy as one person picking up their stuff and leaving. Don’t expect them to be back to normal and unaffected immediately.

It’s a hard process. Let them go through it the way they want and need to. Don’t push them.

5. Know that the best thing you can do for them is to just be supportive.

When you get divorced, you lose the partner you vowed to spend the rest of your life with. That person is gone and now you’re unexpectedly alone. Friends become important.

As a friend of someone going through this, now is your time to just be there for them and support them how they need to be. Invite them, but understand that they’re going to have good days and bad days and won’t come to everything.

Divorce is tough. It marks the end of a life that two people had vowed to spend together. Sometimes people are blindsided, thinking they had a happy relationship when in fact they had no relationship at all.

The best things you can do for a friend going through a divorce are to stay neutral, don’t push for the details, and be supportive of them. No one knows how their divorce feels except for them. By being someone they can trust, you can help build them up and help them through.

3 Tips for Training for Your First Marathon

Go ahead and sign yourself up for that marathon. You've got this, girl.