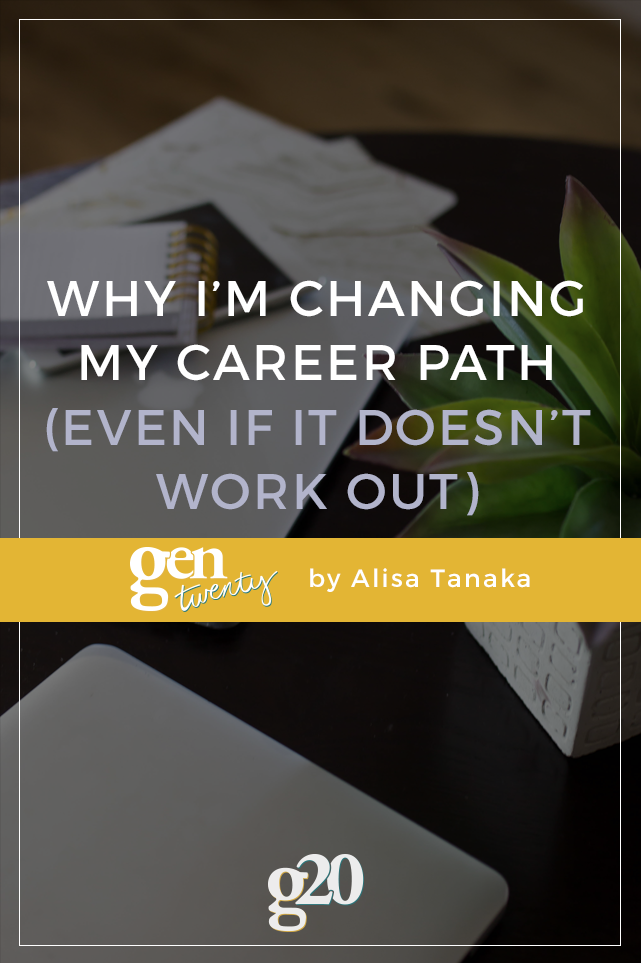 As we grow and mature, some of us might be lucky enough to have careers that don’t change because we love what we do or where we work, but more often than not, as we grow and change, our careers will change alongside us.

Making changes in your career can be exciting, but it can also be risky, especially when you value the stability of a consistent paycheck.

I am one of those people who fit into the aforementioned category, and yet, I decided to take the risk and change my career trajectory. Here’s why:

I Knew I Was Capable of More

While my previous job, which was a wonderful learning experience in its own right, offered a steady paycheck, I knew that I was capable of more than simply pushing buttons on a cash register and selling food.

The security of my paycheck couldn’t change the fact that, as much as I enjoyed interacting with new people, I wanted to have a bigger impact on the world.

I wanted to help young people. I wanted to travel the world. I wanted to know that I was making a measurable impact in people’s lives, and I knew that although selling people things that made them happy helped people to some extent, just having a steady paycheck (although that was a nice perk), and I knew that selling food and handling a cash register day in and day out would give me skills, but stayed in the safety net of the job, odds were that I would never leave.

It’s necessary to respect your goals and continue to take steps toward them, something that can take many different forms. For me, that meant walking away from stability into the unknown.

I Was Unintentionally Sacrificing My Mental Health

I am a recovering people-pleaser. Every time my boss called and asked me to fill in, I jumped at the opportunity to earn extra hours. There were weeks where I was working close to or at the maximum amount of hours a part-time employee is allowed to work.

Don’t get me wrong: there were parts of the job that I enjoyed, but when I stepped back and looked, I had so little time to myself. I was filling my days off with errands, rearranging doctors appointments, and I was rarely seeing friends. In other words, my life revolved around my job.

I put the needs of my co-workers and managers before my own, a pattern that made me emotional and self-critical. With hardly any outlets to express that emotion, I expressed that emotion in unhealthy ways. Although I eventually learned how to express my emotions and needs in a healthy way, the demand and stress took a toll.

With any and every job you take, there are going to be things that you’re asked to do that you may not like, but that doesn’t mean that you have to take it to the extreme and ignore your physical and emotional limits like I did.

Working hard is important, but making time for yourself is just as important. You can’t do your best work when you’re not both physically and mentally healthy, and both establishing and respecting your physical and emotional boundaries while you work is absolutely crucial to maintaining balance.

Every Job Is A Stepping Stone

I knew that I wanted (and still want) to develop an international career in some capacity, and although my job was helping to some extent, I knew that I couldn’t develop an international career if I stayed where I was selling sweets in a mall, even though the job had helped me to develop many invaluable skills. That was when I started to consider teaching English abroad.

When I initially graduated from college, I was absolutely adamant about teaching English abroad; it seemed like the thing everyone I knew was doing, and I just wasn’t attracted to the idea of teaching my first language to people, but then I stopped and thought about it.

No matter where I chose to go, I would be developing an international network on top of my existing one. I could meet someone who had connections in a field that I was interested in. The more people I met, the wider my network would become. Maybe I would meet a connection to help me jumpstart an international career, or maybe I wouldn’t, but I wouldn’t know unless I tried, and I had to start somewhere.

With every job that you take, you learn something new about yourself or develop a new skill (or multiple skills, for that matter). Just because you’re in a specific job now doesn’t mean that you have to stay there forever.

This is not to suggest that you shouldn’t fulfill your responsibilities or quit whenever you want, but each position will help you develop skills to become a stronger candidate for your next position, even if you do start at the bottom of the ladder.

Yes, changing your career can be a risky maneuver, but change is inevitable, not just in your life, but in your career as well. There will also be times when you know that it’s time for a career change despite the fact that according to bystanders, you have no reason to switch careers.

You know yourself better than anyone else. Trust yourself and your instincts and take the leap. You never know what you may find.

5 Reasons to Change Direction in Your Career

If you're regularly and consistently, feeling unmotivated, unchallenged, and unhappy--it's probably time to consider changing direction in your career.