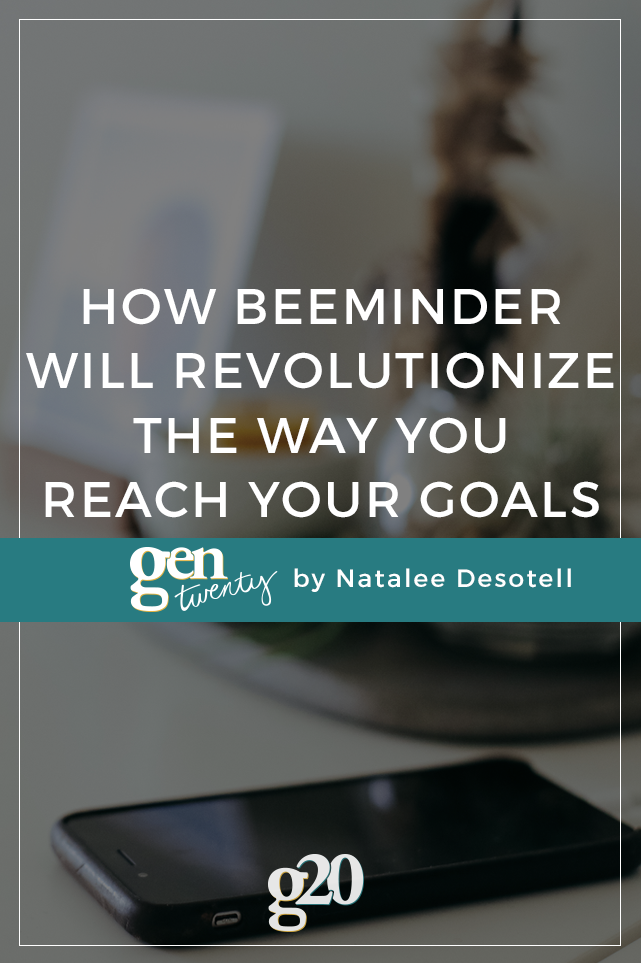 Most of your goals are probably quantifiable, even if you don’t think of them that way.

“Reading more” can mean reading one book per month, “less social media” can mean spending less than 15 minutes on Facebook per day. Breaking goals down into small steps makes them more measurable, which makes it easier to define when you have reached that goal.

With a very simple idea, the threat of losing my own hard-earned money, Beeminder has helped me stay on track with several of my quantifiable goals.

For example, let’s say you want to go to yoga three times per week. Each time you to go to a class, you register on your Beeminder mobile app that you went by adding +1 data point.

There is even a way to automate Beeminder using IF, an app that connects different applications on your phone. IF is cool for a lot of reasons, and I used it with Beeminder to automatically add a data point to my “exercise” goal every time my phone registered that I was at the gym.

Beeminder graphs your data points, with cumulative total visits on the Y axis and the date on the X axis.

Beeminder also draws a “yellow brick road” for you, which stretches across the graph and shows you where your goal area is. The idea is to “follow the yellow brick road.

Now that you have entered your goal (go to yoga three times per week), Beeminder immediately starts keeping you accountable and will remind you if you are at risk of going off track.

It’s pretty flexible, in the sense that if something comes up, you won’t immediately be thrown off track if you miss one day of yoga (because making it up later in the week is A-ok).

You can also adjust your goal (say, two yoga classes per week), but the change only becomes effective a week later, so you can’t simply change your goal the day you are about to go off track.

Beeminder’s sting comes from asking for your credit card number and charging you money (an amount you decide yourself) if you fall off the wagon.

I have not had anything charged to my card yet. In fact, I haven’t even entered my card yet because they give you one “mess up” before actually asking for your card information.

As I understand it, you choose the amount Beeminder will charge you and it starts out very small (mere cents) and builds as you miss your goal more and more times. You are also allowed to archive your goal (again, with one week notice) if it no longer applies (like if you switch from yoga to running for example).

As much as it would irk me to pay even a small amount to Beeminder for missing my goals, the small threat of that happening (which is fully in my control) is so worth it compared to the value it brings to my life.

I am a big goal-setter and I love that Beeminder makes me quantify those goals. “I want to order pizza less often” is a nice goal, but how will I know if I’ve succeeded if I don’t consider exactly how many times per month is “less often”? I’m more likely to reach a concrete goal.

Beeminder also helps me break down bigger goals into tiny steps; a goal of “get all A’s this semester” can be broken down into “spend six hours on schoolwork per day” and “write in my planner every day,” which are much easier goals to focus on.

It’s fun to see my progress in concrete terms, too. I love seeing the graph of my actual progress versus the “yellow brick road” of goal success. It feels awesome when my actual data is above that line and I’m comfortably reaching a goal I set for myself.

Also — for a business that wants to charge my card when I fail to reach a goal, they certainly don’t seem too eager to get me to lose.

Beeminder is amazing at reminding me of my goals and sending text messages and e-mails (or whatever I approve of them sending).

I fell behind one of my goals once because my Wi-fi wasn’t working so I couldn’t enter my data point. After my goal derailed, they even emailed asking if it was a “legitimate” derailment of my goal or if something else happened. I was able to explain what went wrong and they put me back on track without another question.

I imagine there is a limit to the number of times you can claim it was out of your control, but that’s ideal because you don’t want an easy “out” for your goals anyway, right?

Another benefit of Beeminder is that I have a better record of what I have done.

If I wonder how many times I’ve been to yoga over the past three months, I can easily see that information.

There are a few drawbacks to Beeminder, but they aren’t enough to make me stop using it.

First, I’m not in love with the interface. It’s pretty ugly and needs a great deal of simplification. I have a feeling it would be even more popular if the design was more sleek and elegant.

Secondly, Beeminder relies on your word. You can absolutely add +1 to a goal that you have not met without offering any proof – “eat greens every day” or “go to yoga three times per week” would be more meaningful a goal if I had to provide a picture of my salad or check in at the yoga studio each time.

The magic of Beeminder isn’t really the tiny threat of a small credit card charge hanging over your head; it’s in the way it makes you quantify your goals and break them into small parts. You can’t simply set a goal to “get A’s” – you have to specify the steps you will take to get there, then simply put your money where your goals are.

Put your money where your goals are. Here’s how:

No time to get to the gym? Work out at home instead!