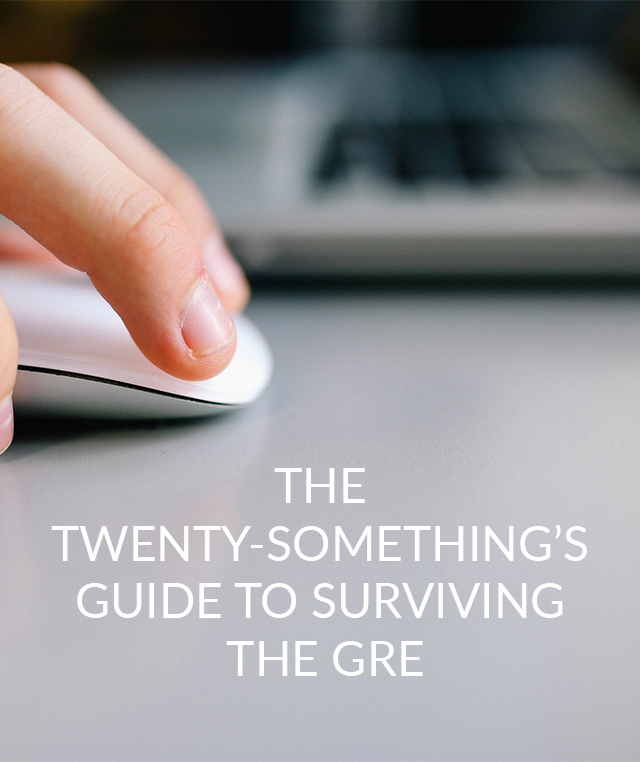 As a high school junior, you probably burst out of your ACT or SAT testing room in a state of utter bliss. Freedom at last! You will never live through the horror of a standardized test again.

Now, after four or more years of school, you’re thinking about applying to a graduate program. That means — you guessed it — it’s time to go buy a new pack of No. 2 pencils and get ready for another grueling test of your academic abilities.

The Graduate Record Examination, or GRE, is about as exciting as the name suggests. The exam is designed to measure general skills, like verbal and quantitative reasoning, analytical writing, and critical thinking, rather than skills that are specific to your field of study. Sorry, your European Witchcraft class won’t help you here.

If you graduated from college with grades that qualify you for graduate school, you already have these skills and know how to use them. Good for you! Now you just need to figure out how to effectively showcase them in a stuffy testing room with fluorescent lights and an almost totalitarian vibe: no water, no gum, no bathroom breaks outside the designated times. There are good reasons for all the rules they have in place, but it doesn’t mean we have to like it.

Well, here’s some good news: you can leave your No. 2 pencils at home. While some exams are still offered using the ugly paper booklet you so fondly remember from high school, most are now taken on a computer. I think it’s safe to say most twenty-somethings are at their most comfortable in front of a computer screen, so at least we have that going for us.

Now, this might seem counter intuitive, but the first step to getting a great score is signing up for the test earlier rather than later. Yes, this means you might only have a few months or even weeks to study, but you will also procrastinate less because of how fast the test is approaching. Not to mention, it’s best to give yourself extra time after the test in case you want to retake it before sending your applications.

The key to doing well the first time, though, is knowing exactly what to expect. The fewer surprises you have on test day, the more calm and focused you will be.

There are three types of sections: verbal, quantitative, and analytical writing. Each section is timed and has two parts. You should do more research on your own, but here’s a general rundown of what to expect in each section:

In the verbal section, vocabulary reigns supreme. Do you know what it means to be querulous or bilious? These are just a couple of the many obscure words that Kaplan has included in their 2015 GRE vocabulary list. If you’ve done any reading in your life, though, a lot of the words will be more familiar to you. Review some vocab lists and grammar basics and you’ll be golden.

In the quantitative section, they’re looking more at your quantitative reasoning than your ability to remember how to find the slope of an infinitesimally small point on a curve. You might need to brush up on algebra, geometry, and statistics, but don’t worry about digging up your old calculus notes. Even if math isn’t your thing, you’ll be fine if you practice.

The analytical writing portion consists of two essays, neither of which require specialized knowledge. Even if you despised writing papers in college, this portion shouldn’t give you too much trouble. Think back to high school when you were required to focus on a thesis sentence, begin each paragraph with a topic sentence, and summarize your points in a well-written conclusion. Put it all together with a sound argument and you’ve got a couple of fantastic essays.

Now that you have a general idea of what to expect, set aside time to study for each section in your own way. Since you made it through an undergraduate program, I’m guessing you have a good understanding of how you most efficiently study. Instead of providing specific study tips like “find a cozy spot near a fireplace and sip peppermint tea while listening to Björk,” I suggest you figure out how you like to learn and schedule time to do it your way.

There are so many options out there: pricey test preparation courses (perfect for some, a waste of money for others), independent study with books and online tests, getting together with friends who are preparing for the same test, etcetera. Whatever got you your best grades during finals week in undergrad, recreate the magic to kick ass on the GRE.

Ultimately, your score is just one part of the total package that the admissions committee will look at, which includes your personal statement, letters of recommendation, and resume. Give the same amount of attention to the other parts of your application, approach the exam with ample preparation and a healthy dose of confidence, and you’ll do just fine.

5 Things to Focus on When Establishing Your Career Goals

We must identify what career goals fit us as individuals, where we envision our career path leading us, and how...