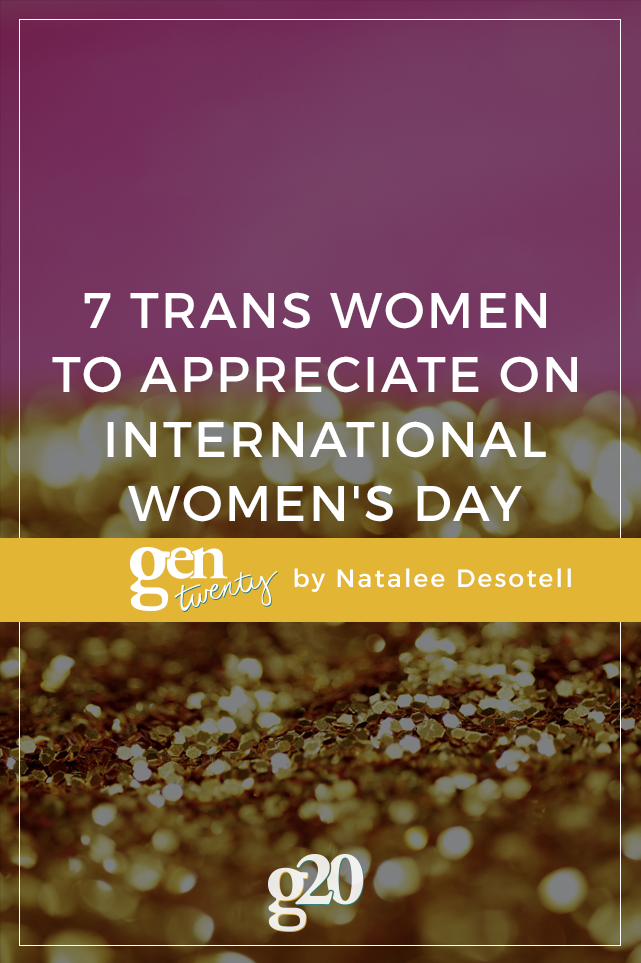 Today is International Women’s Day, a moment to celebrate the achievements of ladies around the world. Here is a short, incomplete list of women who deserve some appreciation today.

Marsha ‘Pay It No Mind’ Johnson is a name everyone should be familiar with. She was homeless for much of her life, but she was a pillar for the LGBT+ community in Manhattan from the 1960s until her untimely, suspicious death in 1992.

In 1969, the NYPD raided the Stonewall Inn, a gay bar in Greenwich Village, because “soliciting homosexual relations” was illegal at the time. Marsha was one of the first to resist the police when they began their assault by throwing the ‘shot glass heard ‘round the world’.

It is impossible to do her legacy justice in a short blurb, but you can learn more about this warm, loving woman by watching “Pay It No Mind – The Life and Times of Marsha P. Johnson” for free on YouTube. It includes footage of her and interviews from her wide circle of close friends.

Another veteran of the Stonewall uprising, Sylvia was a defender of the “T” in LGBT at a time when transgender women were not accepted by the gay community. In fact, in 1973  — four years after Stonewall — she was denied the right to speak at the NYC Christopher Street Liberation Day Rally. Grabbing the mic anyway, she delivered a passionate speech about the crucial role of trans people in the LGBT+ movement.

Today, her name lives on with “The Sylvia Rivera Law Project”, a nonprofit that aims to honor Sylvia’s legacy by fighting discrimination. They prioritize the challenges that face low-income trans people of color.

White cis men are often remembered as the people who started LGBT+ liberation, but the world would be a very different place for LGBT+ individuals were it not for women like Marsha and Sylvia. I encourage you to learn more about Sylvia by reading her story in her own words or watching her friends in interviews about her.

Janet, who named herself after Janet Jackson, is a journalist and media advocate who uses her story of transition and her past as a former sex worker to advocate for black trans women like herself. She is the author of two New York Times Bestsellers —  “Redefining Realness” (2014) and “Surpassing Certainty: What My Twenties Taught Me” (2017) — both of which are an important read for anyone who is learning to define themselves on their own terms.

In plain language, Janet questions the stigma that surrounds sex work and patiently explains her perspective of what it means to be a black trans woman today. The accessibility of her work is notable in a field where complicated jargon is often the norm. In short, you don’t need a PhD in Gender Studies to absorb what Janet has to say. Thanks, girl.

Geena is a Filipino supermodel who moved to San Francisco in 2001, largely because moving to the United States would give her an opportunity to change her name and gender marker. In her 2014 TED talk, Geena talks about the moment when she looked at her new California Drivers license, seeing it as her license to live.

In 2015, Geena was Executive Producer of “Beautiful As I Want To Be”, a web series about trans youth, trans activism, and trans women in the media.

Today, she is a cast member on “Made to Model: Trans Beauty in Fashion”, a show on Logo that documents the journeys of trans models who are breaking barriers and stereotypes about what it means to be a woman.

In 2012, CeCe was charged with second-degree murder for defending herself against a man who likely would have killed her. She spent 19 harrowing months in a men’s jail, which led to the documentary “FREE CeCe!” with executive producer Laverne Cox. Now CeCe is a prison reform advocate.

Miss Major is a 77 year old living legend. She has dedicated her life to fighting for incarcerated trans women of color. She was a leader in the 1969 Stonewall uprising and she was the Executive Director of the San Francisco Transgender, Gender Variant, and Intersex Justice Project (TGIJP) from 2006 until retiring in 2015.

The 2015 documentary “Major!” documents her critical role as a mentor in the transgender community.

Known for her incredible vocals as the frontwoman of the band “Against Me!”, the ultimate punk rock babe Laura Jane Grace came out and started her transition in 2012 after living many gender dysphoric years.

Gender dysphoria is a prominent theme in much of Against Me!’s latest work . Additionally, Laura has used her visibility to shed light on Gender Is Over, a NYC-based nonprofit that supports body sovereignty and self-determination.

In 2016, Laura released a book, “Tranny: Confessions of Punk Rock’s Most Infamous Anarchist Sellout”, that documents the alienation, fear, and uncertainty she faced before and during her transition. It’s a wonderful read for music fans who want to hear Laura’s story in her own words.

There are many ways to appreciate these women: read their books, listen to their music, or watch their shows and documentaries. Most importantly, in conversations about the LGBT+ community, make sure their contributions are acknowledged.

This list would not be complete with addressing the fact that trans women– particularly trans women of color — are at a heightened risk of violence compared to cis women or or white trans women.

Trans Women We Have Lost to Violence

Transgender day of remembrance on November 20th is one day to honor the memory of these women, but International Women’s Day is another opportunity to remember their names. In 2018 alone, we have lost Christa Leigh Steele-Knudslien, Viccky Gutierrez, Tonya Harvey, Celine Walker, Phylicia Mitchell, and Zakaria Fry.

Here is an incomplete list of organizations supporting trans people in various ways. Please contribute if you are able.

How will you support your sisters (and not just your cis-ters) on International Women’s day this year?

Recognize your value to the organization, and set professional boundaries that allow for a healthy work/life balance.