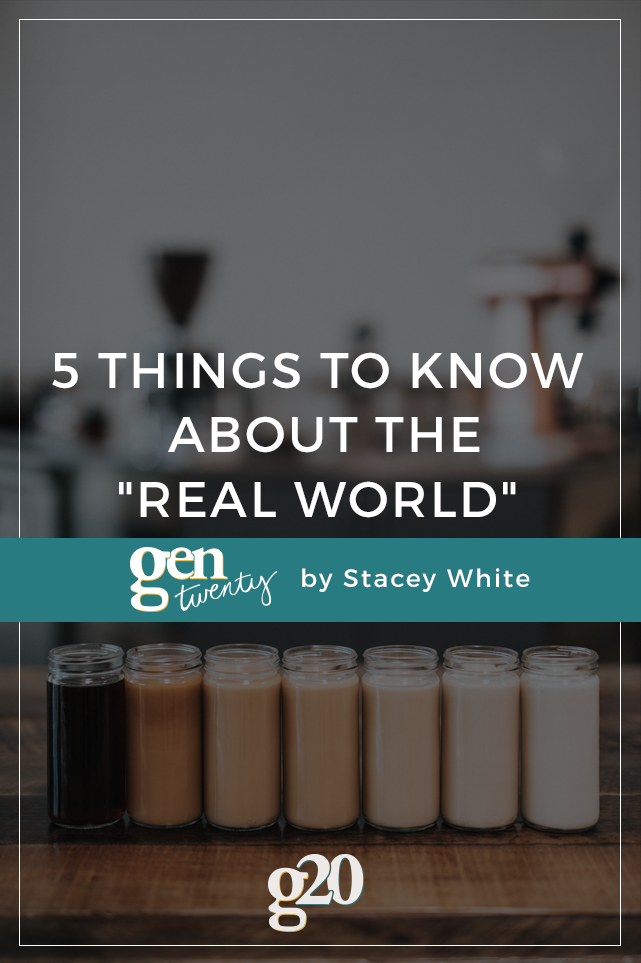 The bubble that is your college experience is one that you’ll soon wish never popped. You may even find yourself trying to land a place on some Master’s course, followed by a Ph.D., not because you want to better your chances in the job market but because you don’t want to face the real world.

All those horror stories you hear from dad’s wearing khaki pants and Ralph Lauren polo shirts, the misery etched on their faces as they pick up their kids from college the day after graduation, wistfully wishing they had a second chance at life. “Oh, we knew how to have fun back in the glory days with Tommy Tom and Fly Pete,” you’ll hear them mutter as they trudge on knowing tomorrow is Monday again.

Even if you manage to escape these people, it won’t be long until you pick up a newspaper (read: news app) or flick on the television and hear some news reporter telling you – the latest set of grads — that the job market is bleaker than a Game Of Thrones winter. You may even be lucky enough to bump into your economics teacher on the way out of the door, the kind of teacher that will say, “Good luck,” and then remind you that, “You’ll get nowhere for just taking part.”

Jeez. Thanks, world. Thanks, previous generation for all your optimism. Thanks for letting us know that the best of life ended for you at 22 years old, for telling us we’ve just peaked when it is too late and for informing us that life, from here on out, is, well, shit.

Well, to help you out a little and cast some truth on the situation (we’re talking actual truth, not the kind that our oh-so -wonderful President loves to chalk up on Twitter… and then delete when he gets proven wrong), we have pulled together a list of things you can expect to happen after college. Forget what those who were twenty forty-years ago say, this is what to expect from today’s world.

1. That Major Of Yours? It Doesn’t Matter

We know this is a pretty big and sour pill to try and swallow but swallow it you must because you will quickly find that most people fall into jobs that have absolutely zilch to do with their major.

Not only that but most recent graduates (literally, we mean more than half) land jobs that don’t even require a degree. What we are saying is, all that effort you put into your degree, probably won’t translate into a lucrative job.

Don’t view that as a negative thing because it is anything but. After all, very few of us know what career we want to have when it comes to choosing what we major in; it is just far too early for us to make that kind of commitment.

So, instead of hearing this news and letting it turn you forty shades of blue, look at it and see it as a liberation of unrivaled quality. This means you can leave college with that shiny certificate of yours and then decide that you don’t want to go down that route at all. You can choose a career (or even a part-time job) based on what your passion wants to do and not what your pushy parents are telling you. Lib-er-a-tion.

2. College Was Not As Good As It Gets

How depressing would that be? How miserable would it be if getting up early for lectures, shouldering the pressure of midterms and the unrelenting bite of finals was the peak of your happiness.

How much would it suck if being perpetually broke, washing your clothes at a rusty launderette, getting turned down by the person you crush on, and kicked out of parties were meant to be the best experiences of your life?

College is great, but it is also terrible in the sense that it is tough. It is a cocktail of hard work, nagging, consistent self-doubt, social pressures, and corridors that are lined with all sorts of people you don’t want to get stopped by.

What’s more, all those frat and sorority parties you were expecting are rubbish for the simple fact you can’t drink for the first couple of years. Now let’s compare that to the real-world — the one you are set to enter — where you can move to a city of your choice, live in your own place, make your own money, eat out when you want and where you want and enjoy a drink because the law can’t stop you anymore.

Seriously, college is meant to be the best time of your life? C’mon now.

3. You Are Not Going To Be Broke

This is another thing most recent graduates get told, but it is such a subjective term. Yeah, compared to some people you are going to be broke.

For instance, you are going to be broke compared to that one friend in every group who lands a high-paying executive job at some fancy law firm straight out of school, and you are going to be poor in comparison to your parents who have two-salaries coming in, a pension pot that is bursting at the seams, a mortgage that has been paid off and the fact they have put your old room up on Airbnb.

This will all seem even more far off as you navigate the real world for the first time. You’ll have your law school debt to pay off, which you can read all about in this article. You will have rent to navigate and utility bills and have to start getting used to a budget.

You will have insurance to consider, transport costs and buying groceries. Sure, you may not land on your feet straight away like Doug, but after getting a few bar gigs, some babysitting work and a part-time role writing blogs for a freelance copywriter, you’ll find yourself going for an interview with the chance to bring in a mid-five-figure salary.

It may not allow you to get a house in the hills, but an apartment with two chairs, a sofa, and a Scarface poster, yeah. And what more could you want?

The world has changed since your parents were young. We live in progressive times where people want to spread their wings and fly for a lot longer.

People rarely marry their childhood sweethearts anymore because the world is much bigger, and that means settling down with a spouse, kids, a dog, and a subscription to a half-humorous parenting blog by the time you turn 26 is unlikely.

You see, you are probably going to find that you are three to five relationships away from settling down. You may find this a little sad now, but it won’t be because all your friends will be single too.

Basically, the dating scene will be around for a lot longer and, when you turn 31, you will find your dating pool is exactly the same size as it was when you turned 21, the only difference being you can afford to go on fun dates.

5. Success Doesn’t Look the Same to Everyone

Not everyone was born with the same amount of luck. That’s right, luck. You will find this is a huge factor in life, something that will get cemented as you meet people that have worked hard their entire lives, doing fourteen hour days and then working weekends only to remain in the same place and no success to show for their efforts.

That doesn’t mean they are not happy. They are probably happier than most people because they have that thing called self-satisfaction, acknowledging their efforts and their ability to stay chipper despite it. However, what they don’t have is the superficial-success that has been shaped by society’s warped view of the word ‘success.’

You will meet people who have been plugging away for years and years and years only to fall short of society’s measurement for success, and then you will find others who achieved the American Dream through the same means; the difference being luck.

They were lucky enough to be playing the trumpet at that jazz club on the night a label executive was in there. Another person was lucky enough to be ballsy with their business pitch on the day the CEO got laid for the first time in a week, meaning he was in the right mood. It is these little nuances that can be the big difference in life.

Unfortunately, you are also going to meet people that made a ton of money through zero effort and pure luck. Please, try not to clench your fist and swing. Put that effort into something more meaningful: your vision of success.

It is never too late to accomplish what you want, but you have to work for it. You got this,...