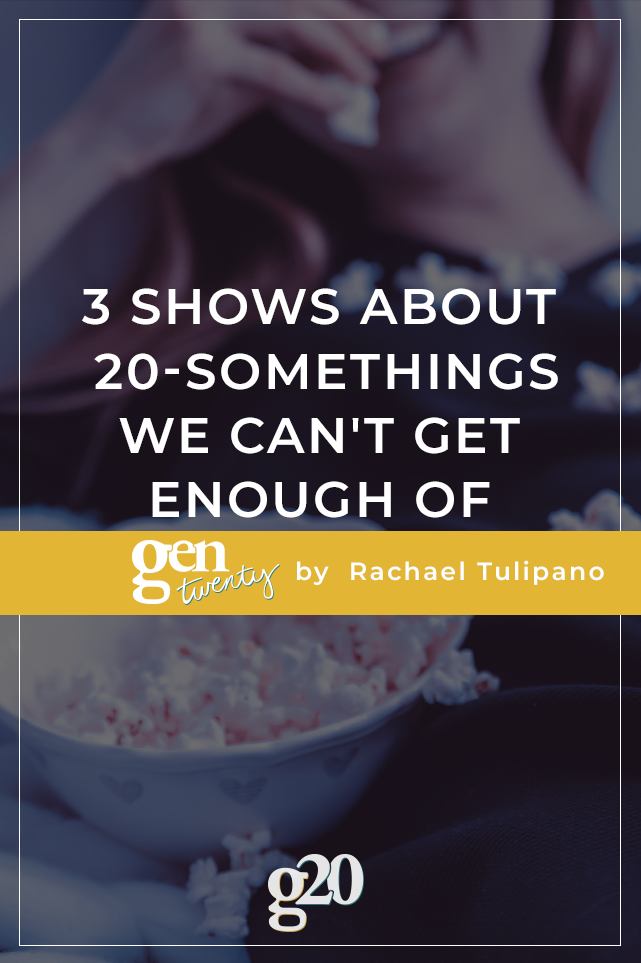 If you’re anything like the GenTwenty tribe, you enjoy binging shows to unwind during down time in your busy routine. It can be so relaxing to spend your free time catching up on episodes of your guilty pleasure shows. We get it–television shows are super enjoyable and even slightly addicting. Any Game of Thrones or The Handmaid’s Tale fans out there? It can be hard to stop watching shows as good as those!

These days we’re all about television shows for and about twenty-somethings. Here’s a short list of our favorite age-appropriate shows and why we’re addicted:

Sure, FRIENDS is a 90’s sitcom based in NYC that offers dated comical material to the twenty-somethings of our generation, but it’s hard to dispute that a lot of the themes and plot of the show are still relevant to the 2018 twenty-something. This series follows the lives of 6 inseparable friends–Ross, Rachel, Phoebe, Chandler, Monica, and Joey–as they navigate their twenty-something (and thirty-something) years in the throes of love, heartbreak, career choices, and other life struggles.

FRIENDS is addictive for a multitude of reasons. First off, it’s hysterical! Each character was cast so perfectly, with quirks, one-liners, and personality traits that blend together so well. Secondly, the show teaches viewers so many things! From how to raise a child as a twenty-something, to not marrying the wrong person, to quitting your temporary job for a career in the field you’re actually passionate about, this show has so much to offer its audience.

Even if it feels like some of the references in the show seem dated, the heart and core of the series is absolutely relevant to the highs, lows, and everything in between that us twenty-somethings are facing. Basically, FRIENDS is an iconic and timeless show. If you’ve never watched it before, give it a try!

If crushing it in the world of publishing, female power, sexual discovery, and hustle are themes that resonate with you, give The Bold Type a watch. We’re obsessed with this show because it is the epitome of the twenty-something experience for young professionals trying to make it in the cut-throat setting of NYC at a magazine in departments including writing, social media, publishing, and fashion.

The main cast features three inspiring women–Kat, Sutton, and Jane–who each struggle with relatable challenges including negotiating for the jobs they want, dating mishaps, struggling to pay rent while bogged down with student debt, and ultimately finding themselves. The Bold Type is quirky, comical, and genuine in its portrayal of the ups and downs that come with high profile jobs in today’s competitive industries.

What makes this show so special for twenty-something viewers is how honest it is in its portrayal of exploring sexuality, privilege, female empowerment, and hustle. If you’ve never watched The Bold Type, you’re in luck because season two is airing now and binging the existing episodes should be quick to catch up on.

So, Younger is meant to be about twenty-somethings, but the premise of the show is actually about how a 40-year-old woman pretends to be in her twenties to land a job in publishing. Under the guise of a twenty-six-year-old, Liza Miller is able to work in her dream field after being out of work for so long to raise her daughter.

Younger is absolutely positively addictive. With Liza’s dramatic love triangle between hunks Josh and Charles, her badass bestie Kelsey (played by Hillary Duff), loyal roommate and friend Maggie, and quirky yet lovable boss Diana, her life of a (pretend) twenty-something is an endless mess of highs, lows, and dark secrets. In many ways, the show depicts an accurate twenty-something experience in the form of dating challenges, experiences living with a roommate, sexual exploration, and career moves.

At the end of the day, the series is about a 40-something playing a twenty-something, but the show is incredibly fun, sad, frustrating, and every other emotion that keeps viewers hooked. Definitely give it a watch!

There are so many shows out there for and about twenty-somethings. These three in particular have the GenTwenty tribe hooked. What other shows have you hooked that epitomize the twenty-something experience? Share your recommendations in the comments!

How To Deal With Curveballs At Work

Didn't see that coming? Here's how to handle it.