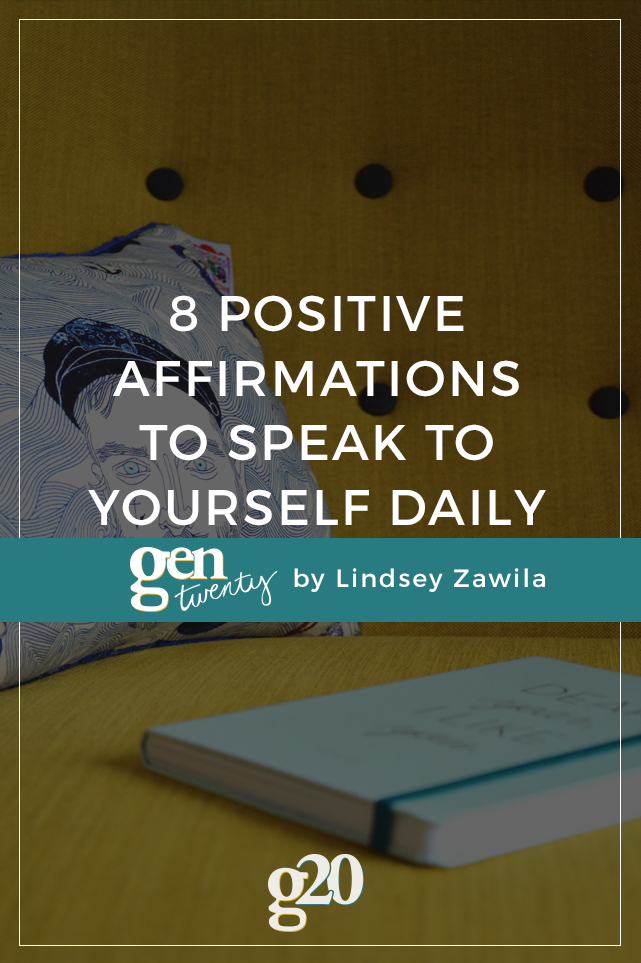 For years, I grew up in close proximity to my cousin. A lot of us can probably relate. Whether it’s a cousin, a sibling, or a best friend. There was always someone else we were being compared to.

In my case, we are the same age, lived in the same town, and went to the same school. We were compared in almost every way, especially in high school.

Realistically, I know that another person’s quality does not take away from my own.

There are a lot of compliments that aren’t based on how you look.

And I wish I heard more of them. Not that we should depend on the affirmations of others. But it’s really difficult to believe in yourself when you always hear negative things, or even nothing positive at all.

Speaking affirmations to yourself on daily basis is a positive way to improve your self-confidence and the relationship with yourself.

Here are a few positive affirmations to speak to yourself on a daily basis:

1. You deserve to be happy.

This isn’t in reference to money or fame. It’s simple happiness, however you perceive it. It could be falling in love and raising a family. For others, it could simply be an inner peace happiness.

Whatever it is, you deserve your happiness. You deserve to be at peace and content with yourself and your life.

You are beautiful on the inside and outside. Whether you think you’re too heavy or too skinny, not fit enough or too bulky, lacking certain features or have too many flaws, you are beautiful just the way you are.

Societal beauty standards vary by time and place. The media also often dictates what’s beautiful. So whether society agrees or not, you are beautiful on the inside and out.

3. You have so much potential.

A very wise classmate once pointed out to me that we don’t know what’s coming. Our future is unknown, and our lives as we know it can change in an instant. We often think of this as something negative, but our lives can change for the better as well.

Do what you love, keep working towards your goals, and you can be amazing.

For some extra motivation, remember that some of the biggest started as normal people that stumbled and even failed. JK Rowling’s Harry Potter was rejected repeatedly. Bill Gates is a college dropout. Oprah Winfrey was told that she was unfit for television. Walt Disney’s Mickey Mouse was rejected over and over again, as the big media companies didn’t think a mouse could win the hearts of the public. These are examples I found on Pinterest, and there are so many more.

Especially as children, we are told not to cry, not to get angry, not to speak out of line, and not to do so many other things that are so naturally human.

Life is hard, and it’s okay to have human emotions when a loved one hurts you, or someone disrespects you, or when someone in your life passes away. It’s okay to not be okay.

I know it’s often difficult to believe, but it will be. If it’s not okay yet, it’s not the end. If it feels like the end, try changing your perspective. There are other ways to look at the situation.

And maybe it’s not the world tearing your life apart when things aren’t going as planned. Maybe the world is pushing you on the path you need to be on. But the only way to find out is if you continue on and see.

Maybe there are amazing things on its way, but you would’ve missed them if you continued as you had originally planned. Nonetheless, it will be okay.

When you think you’re not good enough or you’re not doing enough, you are doing just fine.

It’s easy to wonder if there’s something more you could have done, or if you should’ve done something differently. Life is hard, and it’s difficult to know if a different option would’ve been better or worse. All you can do is make the best decisions you can in the current situation with the present information.

It’s all we can do, and it’s the only thing that we do. So try not to worry, because you are doing just fine.

This took me a while to understand. When I was an underclassman in high school, I looked up to the upperclassman and all they accomplished.

Some were easily recognizable names, as they had been extremely involved. They were captains of their sports teams, competed on prestigious academic teams, and they were in all the AP classes. They were the type of people I looked up to and I wanted to be.

They were the ones we talked about with admiration behind their backs and looked up to. When I was fortunate enough to accomplish the same things, I didn’t hear what people were saying behind my back. But I like to think that it’s similar.

People you know and strangers you don’t know admire you. Most of us won’t know what strangers think of us or say about us, but it could surprise you. Someone does admire you, whether you know it or not.

What To Keep in Your Emergency Self-Care Toolkit (plus FREE Kit-Building Download!)

Bad days happen. And when they do? It's best to be prepared to support your mental health.