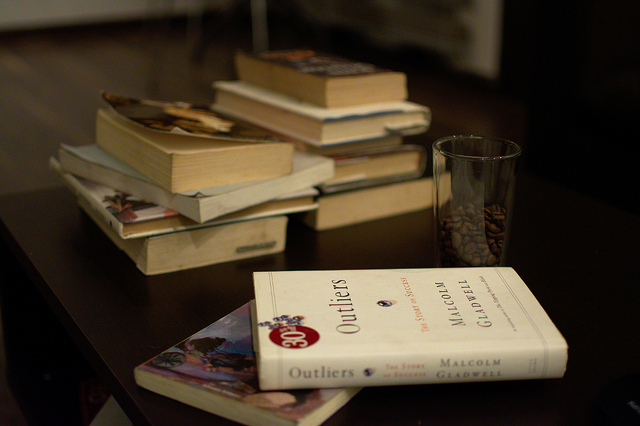 Outliers are the data points that lie far outside the normal Gaussian distribution (like Spiders Georg who consumes 10,000 spiders per day and should not be counted).

Malcom Gladwell’s 2008 non-fiction book “Outliers: The Story of Success” is about exactly those cases. Specifically, Gladwell examines the factors that contribute to success. You might think that success is born out of high intelligence, superb work ethic, or being born with a silver spoon in your mouth. And sure, those certainly contribute to success in some ways.

Buy “Outliers: The Story of Success” on Amazon

However, with help from ample data and striking anecdotes, Gladwell posits that success is a curious thing which is less about the individual person and more about the circumstances in which they are brought up. Instead of high IQ and hard work (although those may be helpful), success may come from something as seemingly arbitrary as one’s birthdate, the elementary school one attends, or the particularities of the culture one comes from.

Gladwell opens Outliers by pointing out a curiosity in the world of hockey. I’m sure you haven’t brushed up on your elite Canadian hockey statistics lately, so let me fill you in on a little-known-secret: most elite Canadian hockey players are born in the first few months of the year. Why is this? It turns out, eligibility for playing hockey in the youth leagues goes by calendar year, so children born in January are playing on the same teams as children born in December.

While an 11 month difference doesn’t seem like much, it makes a world of difference with young kids out on the ice. The older kids are more agile and are often bigger than their younger counterparts, so they stand out as having more natural talent. This results in the older players receiving special attention and opportunities to move up to the elite leagues over the slightly younger players. Obviously, being born in the early months of the year does not result in some special hockey-playing gene that makes you destined for success. Instead, it just gives you a slight advantage that, compounded over many years, makes the difference between a Wayne Gretzky (born in January, in case you were curious) and an extraordinary talent that is squandered because their birthday was in the wrong part of the year.

A similar type of demographic luck is revealed if you take a look at the richest people in the world throughout history. On a list of the 75 richest people in history, which includes names from Cleopatra to Warren Buffet, an astounding fourteen Americans appear, all of them were born within nine years of each other. I’ll give you a moment to take that in.

On a list of the 75 richest people in the entire world, nearly 20 percent of them were born in the same country within one decade. Many familiar names appear on the list, like Andrew Carnegie (born in 1835), J. P. Morgan (born in 1837), and John D. Rockefeller (born in 1839). All three of these still well-known business tycoons were born at the exact right time to take advantage of the transforming American economy. It’s almost enough to make you wish you were born in the 1830s, right? (Just kidding, the 1830s were terrible for literally anyone who was not a rich white man).

Another piece of the success puzzle that Gladwell teases out of his research is the “10,000 hour rule.” You’ve heard “practice makes perfect,” right? In his research, Gladwell found that many people who found outrageous success had managed to practice just the thing that would eventually become so sought-after.

For example, Bill Gates’ success came not only from superb intelligence and creativity, but from unique opportunity; it started when he enrolled in an elementary school that just so happened to have a Mother’s Club. And not just any Mother’s Club, but a Mother’s Club that was willing and able to use rummage sale proceeds to put towards buying an early model computer for the school.

What’s more, young Bill was allowed to skip out on other classes to spend time playing around with the computer. This interest grew into a deep understanding of computer programming by the time he reached his twenties, just in time for computer programming to be the next hot skill to have. At the end of the day, Bill Gates had at least 10,000 hours of practice in programming which made him just the expert the world needed in the 1970s.

Similarly, the Beatles didn’t just wake up one day with incredible talent and charisma. They paid their dues in the early sixties playing in clubs in West Germany for up to eight hours at a time. They may not have known their way around a tune when they started, but they certainly got the hang of it after spending at least 10,000 hours honing their skills on stage. In the case of both Bill Gates and the Beatles, success has a lot to do with being presented with opportunities early and seizing them.

As twenty-somethings who are trying to forge our paths in a not-so-stellar economic climate, we’re all asking ourselves how to find success. Whether you measure success in terms of dollars in your bank account, stamps in your passport, or connections on LinkedIn, you’re thinking about how to squeeze as much “success” as you can out of this world in the short time you have here.

Are you thinking of how to squeeze as much “success” as you can out of life?

So, are you an outlier? Do you have a shot at wild success based on your unique skills if they are suddenly in demand in the next one, five, or 10 years? What are your unique skills, anyway? And how does your birthdate, birthplace, culture, or any other seemingly extraneous factor impact your chances at success?

Of course, by definition, we can’t all be outliers. We hear all the time that millennials are a spoiled, entitled generation who expect success to be handed to us on a silver platter because each and every one of us is “special.” Truthfully, I see no evidence that that’s true.

There may or may not be something special about being a part of Generation Y, but that’s something we don’t count on. We may not be white males with business sense born to wealthy families in the 1830s, but we are educated, connected to the world around us, and eager to make the world a better place, so we must be headed for some type of success, right?

I’m reading #Outliers – what do you think?

Business and Pleasure: Where to Draw the Line with Work Relationships

It’s an age old question: Is it OK to mix business and pleasure? I have found myself asking that question, and also...