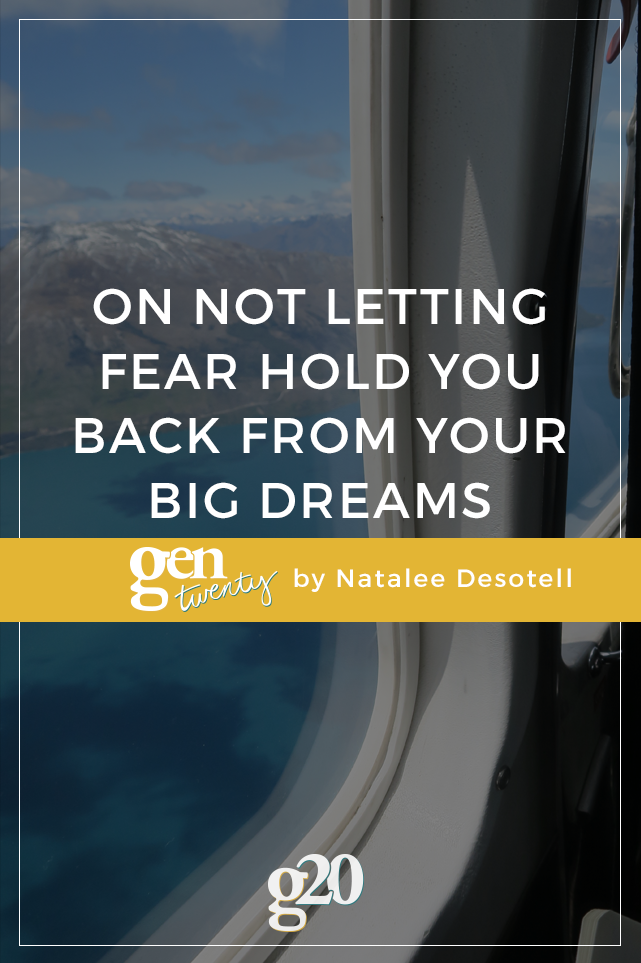 If I had to choose a character from Rugrats that embodies who I am as a person, I’d want to say Angelica. Even though she is a bully to those “dumb babies”, I see her as assertive and bold. On my better self-image days, I think I truly am like a (nicer, less spoiled) version of her. A very scientific Buzzfeed quiz confirmed that I am Angelica Pickles, at least based on my baby food and play-dough preferences.

If I’m being honest, though, I’m totally more of a Chuckie Finster. Hand-wringing, anxious, over-thinking Chuckie, who is aware of any possible thing that could go wrong in virtually any situation: that’s me.

This tendency towards trembling in my boots comes in handy when, say, I’m crossing a busy street. I’m not likely to get hit by a bus because I’m super cautious and wait for a giant opening. At least I have that going for me.

My endless worriment is less helpful in other areas of my life, though. When I’m thinking about my future career and a nice combination of impostor syndrome and what-ifs set in, it’s a recipe for a self esteem disaster. My worrying is not doing me any favors when I’m tempted to only apply to graduate schools I know I can get into to avoid receiving a single rejection. That’s not doing what scares me. That’s not living up to my potential.

It’s a funny thing, fear. Those of us who fear failure might end up failing simply because we’re afraid to try. We wouldn’t fail if we didn’t fear it in the first place. There is no magic pill to get rid of fear (I’m still waiting for that to be invented), but there are strategies you can use to rise above the fear.

For one, remind yourself of the aphorism “perfection is the enemy of good.” Aiming for perfection in any situation can be counter-productive. There’s nothing wrong with aiming for the top; gold medals, A-pluses, and blue ribbons are awesome!

But, your drive to be the best has to live in tandem with an ability to handle it when you fall short. Your drive to succeed always has to be greater than your fear of failing, otherwise you’ll be stuck in a boggy middle-ground where you’re too afraid to do anything at all.

This is similar to the Nirvana fallacy, which happens when you assume there is one perfect answer to a problem. If you can’t find that ideal outcome, there is no point in pursuing a solution at all.

A real life example goes something like this: one could argue that anti-opiate campaigns will never work because people will continue to use drugs. This ignores the fact that the goal is reduction, not an eradication of the problem. Sometimes your solutions (to homework problems, to interpersonal issues, to your financial woes) will be less-than-perfect. That doesn’t mean they aren’t worth the time.

These fears of failure, of not being good enough, of rejection, have probably held me back from several opportunities in my life. I’ll never know for sure because, well, my fear resulted in my doing a whole lot of nothing.

I decided not to apply for scholarships, competitions, or jobs because I didn’t believe I could be the best candidate for anything. What’s the use if I know I can’t be the best? That’s the Nirvana fallacy, for ya.

One of the most compelling ideas I’ve heard to combat a fear of failure: fail on purpose. In a 2014 episode of the Freakonomics podcast, titled “Failure is Your Friend”, they attempted to break down the stigma of failure. No one wants to share their failures because failure is seen as embarrassing and demoralizing, but what if we could see it for what it is: a necessary part of life? Failure means you’re trying, and trying leads to success.

One of the more interesting approaches I’ve ever heard of is a guy who aimed to fail every single day. His name is Jason Comely, and he realized fear was keeping him from living his life. Tired of wallowing in it, he decided to make a game of failure, an exposure therapy of sorts. He would approach strangers and ask for favors, knowing he was unlikely to be successful. His goal was to fail every single day, weakening the sting of failure over time. The more he failed, the less failure could hurt him. Maybe failing often (and learning to fail gracefully) is the way to go.

You knew this suggestion was coming, I’m sure. But you gotta do it. Rip the Band-Aid. It’s true, the fear of starting a Big Scary Thing is often worse than the fear while doing it, especially if you just jump into it quickly. Don’t give yourself time to overthink it – there’s plenty of time for the “I’m not good enough” speech to yourself after you’ve applied for your dream internship.

For now, dig into that application and put your best foot forward. Worst case scenario, now you have an updated resume and a little more experience writing cover letters. Just get it done and overthink about it later, if you must.

If a little anecdotal evidence is what you’re looking for, I have that in spades. I’ve gotten so much better at throwing caution to the wind (except when crossing busy streets). Many theoretical situations I brought up in this article were real fears that I overcame.

I applied to graduate school at my reachiest reach school of all and was accepted. I applied for an internship that seemed beyond my capabilities; now I’m in my eighth month there and doing great. I submitted some work for a competition even though I felt like my entry would be sub-par compared to others; I won four awards. I nearly backed out of all these opportunities because of fear, but the Angelica in me didn’t let that happen.

If you’re looking for a sign to do what scares you, whether it’s joining a Crossfit gym or it’s applying to your dream job even though you are barely qualified, or it’s something I haven’t even mentioned in this article (but you’ve been thinking about it this entire time), then this is your sign. Go for it.

Next time, try not to wait for a sign at all.

25 Ways Be a Better Person

While no one is perfect, we could all stand to be better people.