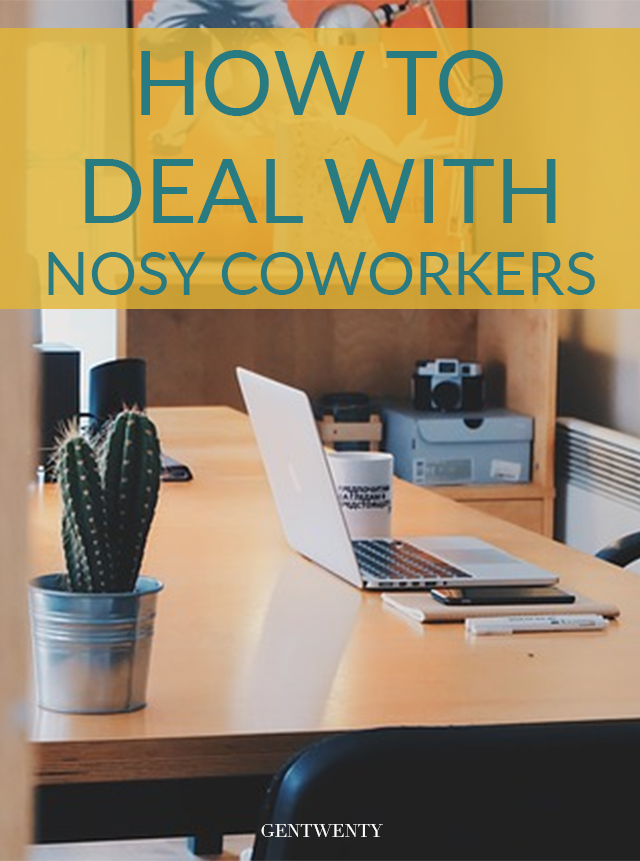 In almost every and any type of work place, you will eventually stumble across one or two nosy coworkers. Unfortunately, it’s a way of life. I’ve encountered my fair share–if not more–of nosy coworkers. Sometimes you inevitably have to go about your work day and just ignore them when it comes down to it.

Some of you go to work to collect your paycheck, make ends meet, get through your college tuition woes, or simply to earn extra money. While others are working their way up in the career they want to work in. Whatever your situation is and whether you love or hate your job, you will have an encounter of some sort with a nosy coworker.

My personal experience with this is that’s all I deal with in my workplace. I work in retail and almost all of my coworkers are nosy, gossip, and have nothing better to do than do both of those things all day long. There are people of all ages in my workplace and it seems like the older they are, the worse it gets. I can’t help but attribute it to either one of the following: bitterness, being stuck in a career they hate, or they’re just tired of working.

While I understand these feelings, I am not the one to put them in their predicament, nor is anyone else. You can’t blame anyone but yourself for your unhappiness. My motto is: it’s up to you to create the life you want, and your happiness depends on it. 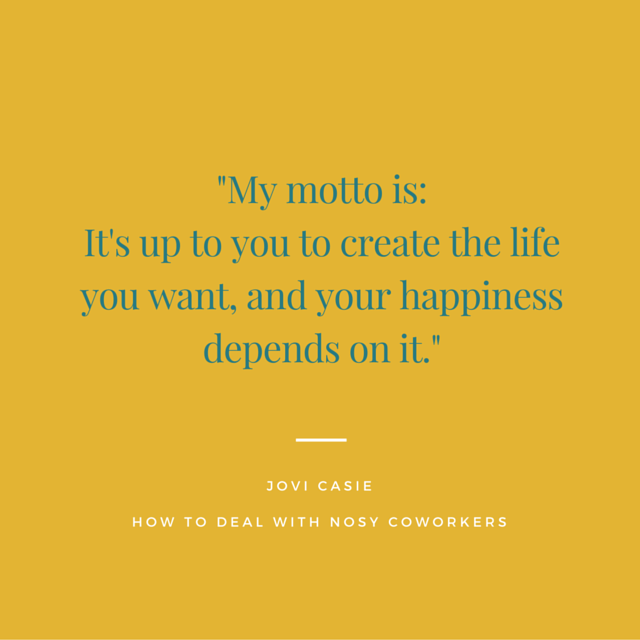 With that said, these coworkers who gossip 24/7 and always want to know everyone’s business are simply people who haven’t found their own happiness. I find myself saying these people have nothing better to do than talk about other people and dig up what they can on them, don’t they have lives? It’s hard not to think that in these situations.

Dealing With the Gossip

Lately I have been one of the latest victims of workplace gossip gossip. As the subject of everyone’s conversations, it got to be a bit much for me. To the point where I would come home crying or just really frustrated. I didn’t even want to work anymore, that’s how bad it got.

Let me start of by saying I am a very private person and for good reason. I don’t discuss my personal life, my dating life–nothing. Well since I found out I was pregnant, obviously I began to show more and more. But I hadn’t told anyone at work because of the aforementioned gossip problem (have you ever experienced that?). They bury their noses in your business and make up stories just to have something to say. Yes, they literally do that.

Now, of course I was super happy about my pregnancy, but I showed my excitement around the people who matter — family and friends. Not my nosy, gossipy coworkers. So people began to gossip and desperately wanted to know if I was indeed pregnant. I heard things like, “Who’s the father?” (because I never spoke about my boyfriend at work), “Why is she trying to hide it?” and, Does she even know she’s pregnant?!” This made me literally laugh out loud, only because of what they were saying and what their conclusions were leading to.

So here’s what I did.

I didn’t answer their questions and I let them think whatever they wanted. I let them create their stories in their heads if it made them feel like adequate human beings. And if anyone had the audacity to come up to me personally, I quickly put them on the spot to see how they liked it. I came up with witty comebacks without ever answering their questions. It seemed to work while simultaneously pissing people off.

Choosing To Be the Bigger Person

This is the ideal approach. You never want to stoop down to the level of nosy people or that whole crowd for that matter. So, ignore them. I know, I know — it’s easier said than done.

Yes, you will hate what they are saying about you, and yes, you will want to clarify the rumors, but all you are doing is giving them the satisfaction of being answered. Just don’t. Instead, ignore them and it will drive them crazy. Eventually they will see that you don’t want to play their silly, childish games and they will stop picking at your business and being nosy about your life.

It really does work. If it still bugs you that much, go home and take a relaxing bath and meditate. It will calm your mind of what you’re feeling.

Some of the best advice I have ever received was to always worry about yourself, especially in the workplace. It’s hard at times to comply to this every day, but when you do, things start to change for the better.

One thing nosy and gossipy people have in common is that they worry about everyone but themselves, in a negative aspect. They seem to focus their energy on trying to make others just as miserable as they are. Don’t become them and don’t let them affect you. Go to work, do your daily work duties, worry about yourself and no one else, and you will have much better days as a result, promise.

Jovi studied Journalism at Southwestern College. She currently works full time and is a mom to a beautiful daughter, named Olivia. When she isn't working or spending time with family and friends, she enjoys being a crazy plant lady, watching HGTV and spending quality time with her daughter. You can often find her cozied up in a local coffee shop writing for her personal blog. She hopes to one day work full time as a writer and to inspire others to live a happy and successful life.

What We Can Learn From the Disney Brotherhood

Since the release of Frozen, the trend has been to focus on sisters, but it's a nice change of pace...