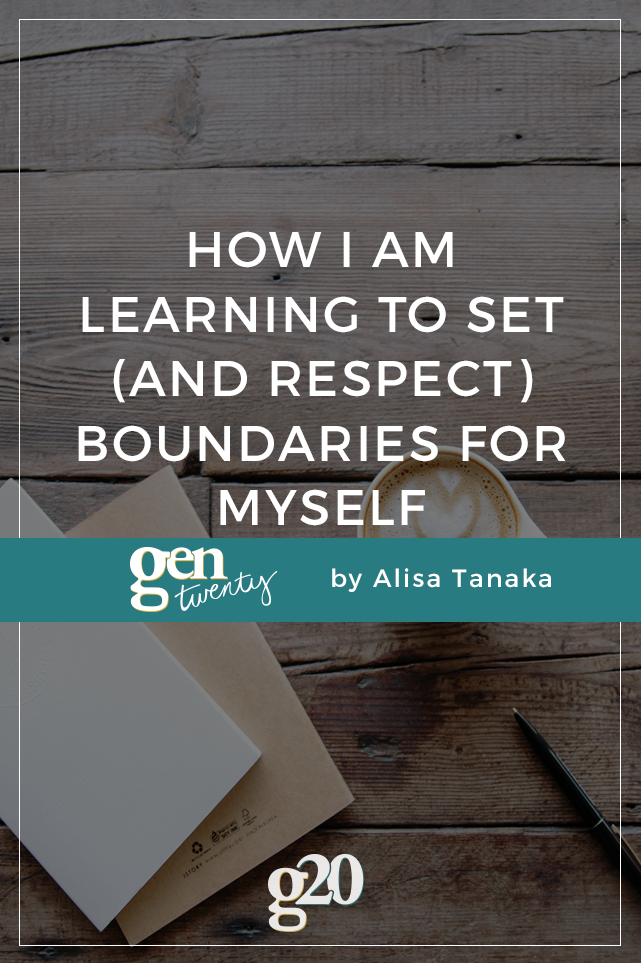 Growing up, my parents taught me to be some a doormat of sorts. I would put my own feelings and comfort level aside in order to cater to other people and their needs. In retrospect, it’s unfair for me to place the blame squarely on my family and the way I was raised, but I did learn very quickly that letting people have their way was a doorway to approval.

Letting others walk all over me started at a young age. When I was being bullied, I would shake off my negative feelings because I was afraid that if I displayed even a hint of negative emotion, that I would be disliked. I let people manipulate me in the hopes that once they had their fun, the teasing would stop, but to my dismay, it just got worse. I thought letting them bully me would get them to like me; I thought telling them to stop would have the opposite effect.

As a preteen, I needed that approval and neglected to stand up for myself. It would be easy to point the finger at something like my heritage and my bicultural upbringing and say, “This is what caused it, and it’s (insert person or thing of choice)’s fault that I’m like this,” but doing something like that is easy because you don’t have to face yourself and the choices that got you where you are.

But the truth is you victimize yourself when you point the finger of blame at anyone or anything. The problem with being a doormat is that you become addicted to external approval, a need that you can’t meet on your own. This is why setting boundaries and being self-aware of your behaviors will make all the difference.

It wasn’t until I started working in retail that I learned the importance of setting boundaries. I learned that I feared that if I set boundaries, the people around me who would be affected by those boundaries would say no and get in my face, or worse, dislike me.

To my surprise, I discovered that most of my peers and superiors would respect the boundaries that I set for myself. The feeling of respecting myself by establishing boundaries was an incredible thrill for someone like me who hadn’t learned how to do it effectively.

Learning how to set boundaries also helped me deal with my addiction to approval. By drawing a verbal line for myself in voicing my boundaries, I knew what I could and couldn’t handle, which meant that I didn’t have to do a metaphorical backbend to get someone to approve of me.

If they appreciated and approved of me, that was fine. If they didn’t, that was also fine. Yes, I’m aware that it’s much more complicated than just saying, “It’s fine,” and moving on, but I relished (and still relish) in the satisfaction that I was respecting my commitments and limits by setting boundaries, and I didn’t need anyone’s approval to do that, but my own.

Coping With My Doormat Past

Sometimes I look back and berate myself for letting those middle school bullies walk all over me, but then I have to remind myself that I was a preteen then. There’s no way I could have had the emotional intelligence of the 26-year-old that I am now as an 11-year-old. When you’re a preteen, you worry about different things; your world is comprised of elements that are completely different from a 20-something-year-old’s world. I have to remind myself that I was doing the best I could with what I had at the time, which realistically wasn’t much, but I was surviving the best way that I knew how to at the time, and that’s all I could have asked of myself at that age.

I’ve found that one of the best things that comes with age is experience.

This is not to say that just because you’re older or younger than someone that you’re any more or less intelligent than they are. Sometimes the smartest things can come out of the mouths of the youngest people, and vice versa.

However, in my case regarding the idea of being a doormat, I’ve found that because I’m aware of the phenomenon, I’m much more conscious of my behavior and actions now than I was then. I can look back on a situation where I subconsciously allowed someone to manipulate me and realize, “Oh, okay. That happened. I didn’t like it, but now I know better and I can make sure it doesn’t happen again.”

Overcoming The Addiction To Approval

When we’re younger, we learn through approval. We get praised if we do something well, punished if do something bad. So maybe it’s easy for me to understand why I developed an addiction to approval independent of my bicultural upbringing and the conflicting values that came with it, and maybe it helped me survive when I was younger, but I’m learning that an addiction to approval doesn’t always help you.

When you have an addiction to approval, your happiness is always contingent on some exterior source. I don’t know about you, but the idea of having someone else control my happiness doesn’t sound very fun.

It’s ultimately you who gets to choose when you need approval and where you don’t. I’ve slowly been trying to learn to live without the constant need for approval, and although it’s difficult, I’ve been finding small moments of joy in the little victories that come along because that means that I’m one step closer to taking back control of my life.

While there is nothing wrong with either choice, I'm focusing my twenties on building my career.