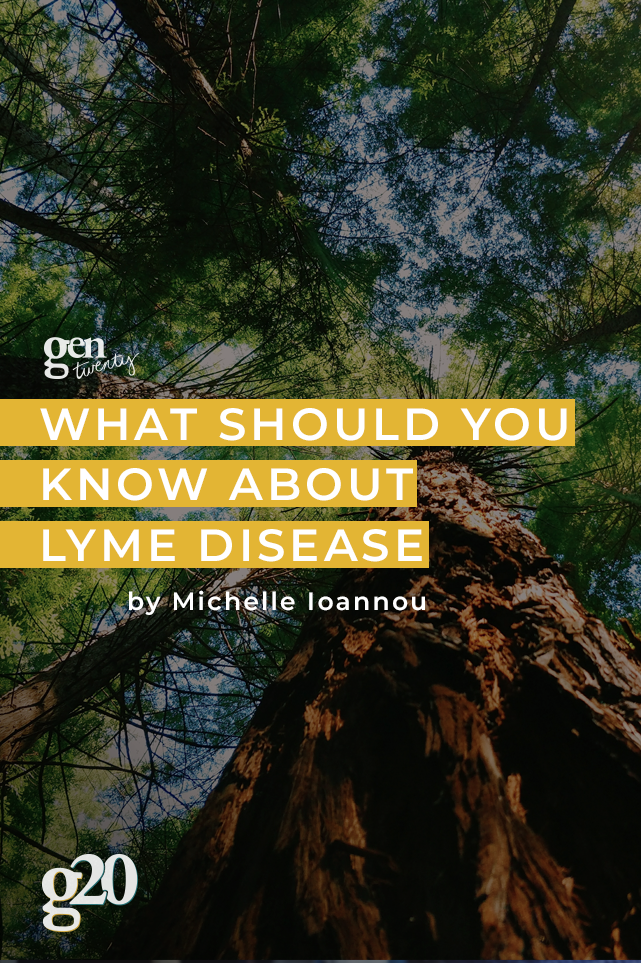 But what exactly is Lyme Disease? And what do people who have it, want you to know about?

According to the CDC, Lyme Disease “is caused by the bacterium Borrelia burgdorferi and is transmitted to humans through the bite of infected blacklegged ticks. Typical symptoms include fever, headache, fatigue, and a characteristic skin rash called erythema migrans. If left untreated, infection can spread to joints, the heart, and the nervous system.”

In 2016, there were approximately 300,000 Lyme Disease confirmed diagnosis in the United States.

What You Should Know About Lyme Disease

I just want to stress that last line again – if left untreated, infection spreads and worsens. That’s something that many people do not know.

In fact, I did not realize it until my cousin, Amanda Zarb, was recently diagnosed in her twenties, after getting bit by a tick back when she was three. I spoke with her about the things people should know about Lyme Disease, and here is what she had to say.

“What protocol is this?” you may be asking yourself. Well, after getting bit by a tick, a person is supposed to immediately go to their doctor and start a protocol of medicines that are supposed to get rid of the disease. However, that protocol does not always work, as what happened in Amanda’s case.

2. Many times, depending on the type of blood work you get to test for the disease, you will receive a false negative.

Unfortunately, some people have already built up the antibodies without getting rid of the Lyme Disease, which in turn caused the blood work to come back negative.

This happened to Amanda. She was tested for the disease five times, and four of those times the blood work came back negative. If you are going to get tested for Lyme Disease, be sure to ask the doctor which type of blood work you are having done.

3. Lyme Disease can wreak havoc on the body, especially if left untreated.

As mentioned above, Amanda was bitten by a tick when she was three years old. But was not diagnosed with the disease until she was 21. Now, at 22, her inflammation levels are quite high, which puts her at rick of having a heart attack or stroke in her 20s.

4. Lyme Disease does not just affect a person physically.

It also can affect people neurologically as well. ADHD, depression, anxiety and migraines are all symptoms of Lyme Disease, and things that Amanda herself has struggled with. Unfortunately, no one knew that they were symptoms of Lyme at the time.

5. Lyme Disease is known as “The Great Imitator.”

People suffering from Lyme Disease will sometimes get a false diagnosis, as symptoms are similar to Fibromyalgia, Lupus, or even Multiple Sclerosis.

6. The CDC does not fully recognize Lyme Disease.

According to the CDC, Chronic Lyme Disease does not exist. If you try to search it on their website, you will just get results for Lyme Disease. Despite many studies showing that Lyme bacteria can survive after a month’s worth of treatment, some doctors do not believe this.

Because of this, many Lyme patients cannot properly heal because their doctor has not considered Lyme as an option.

Additionally, because of this, not all insurances will pay for treatment, resulting in bills that many cannot afford. For anyone interested in learning more about this, Holtorf Medical Group took a deep look at why exactly the CDC doesn’t want you to know about Lyme Disease.

7. Just because you don’t see the physical ailments, that doesn’t mean they’re not there.

In the words of Amanda, “There are days when I’m in so much pain, I can’t even get out of bed in the morning, and if I do, I have to use a cane. I have been granted a handicap sticker for my car and have been judged for it because I do not look handicap. Someone even said that to me once! I can’t walk long distances like everyone else.”

And last, but not least, we want to leave you with….

8. If you know someone with Lyme Disease, make sure they know you love them and support them.

Lyme Disease is not an easy journey. There are good days and bad days – both physically and mentally. And when you’re having one of those bad days, it’s important to have family and friends around you to support you.

I’ll let Amanda sum it up for you best:

“But then my mother or sister will make me smile and I remember that they are the reason I’m going to get through the day. I have the most supportive family and friends. I have friends who don’t get mad when I have to cancel plans last minute because I’m suddenly in pain. And I have cousins, aunts, and uncles to help me raise awareness, who love me, and go above and beyond to make sure I know that I am loved and that I’m not going through this journey alone.”

As you can see there’s a lot the average person might not know about Lyme Disease. It is often not talked about frequently enough. May is Lyme Disease Awareness Month. Please share this post to spread information on the disease.

This article is not intended to treat or diagnose any illness. Please speak to your healthcare provider for individual information.