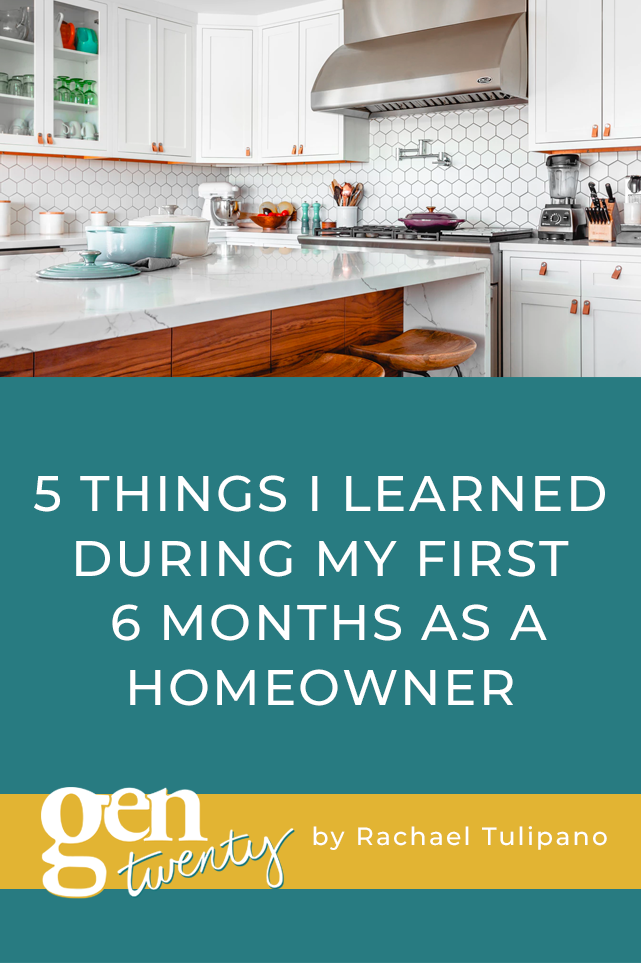 On November 30, 2018 I became a first-time homeowner. Jacob (my boyfriend) and I had only been looking at houses for a few short months when we decided to put an offer in on our dream home. At the time, we were living together in a house he owned independently, but we wanted to purchase something bigger and newer together. We had been living in Jacob’s charming 1970s bungalow since June 2016. While it was quaint in many ways, it was modest in size and we were quickly outgrowing it. After meeting with our financial institution to explore our options, we realized we were fortunate enough to not only buy a newer, bigger house together, but we were also in a position to keep Jacob’s house too.

Jacob was ecstatic to say the least. His parents have been landlords for years and he was excited to be able to keep his first home as a rental for tenants of his own. I was thrilled because we would have rental income to supplement our new mortgage.

After house shopping for a few months, we found the house I knew I wanted. From the first walk through, I knew it was bound to be my home. A brand new flip, the property offered 3 bedrooms, 2.5 baths, an open concept kitchen, large living room, beautiful dining room, full basement, and large backyard fit for our dogs. It was a no brainer to put an offer in, which was quickly accepted thereafter.

Throughout the process of buying our new home, moving, finding tenants for Jacob’s other house, and making this new place our home, I learned a lot. The first six months as a homeowner taught me a whole host of lessons. Here are a few worth sharing:

1. I understood the value of being a first-time home buyer.

I won’t speak for all states, but in Maine there is a program for first-time home buyers that allows you to put down only 3% for a down payment on a house (as opposed to the traditional 20% expected). The downside is that you have to pay Private Mortgage Insurance (better known as “PMI”) until you own 20% of the house. The upside is that this gives first-time home buyers less of a financial burden to buy a house.

Think about it: you might be carrying student debt, making less money than you’d like to right out of school, and/or have other debts like car payments, rent, etc. I saw the value in putting less down now so that I did not have to drain my savings and I could gain more later in the form of equity. Sure, paying PMI seems like a solid downfall, but in our situation it is actually a minimal amount. Better still, it’s a temporary fee that will disappear once we own more of the house.

2. I became familiar with interest.

It quickly became clear to me just how ugly interest is. When it comes to borrowing money, though, it is a necessary evil to pay interest.

It was helpful for me to sit down with a financial advisor at my bank to understand the current rates and when to lock in. She taught me a lot about how rates fluctuate and how once you lock in at a rate during the home buying process, you can’t change it.

We did our best to monitor interest rates and decided lock in before the rates increased any higher. It was helpful to understand how inflated mortgage payments are when calculating your interest rate, too. It was shocking to see how much interest changes our monthly payments, and it became clear early on how important it is to double up (or even triple up) on payments when possible. Paying extra toward your mortgage can shave off so much interest in the long run.

3. I learned not to be taken advantage of.

It’s common practice (and good sense) to have an inspection conducted when you’re buying a property. When we went through this process back when Jacob bought his first house, he decided to forgo hiring a professional and opted to inspect the house himself.

It made sense because it was an older house that he knew needed a lot of work. He didn’t need a professional to point out all of the house’s issues. He could do that himself (and has since fixed it up).

For us buying this new flipped house, we wanted to do it the right way to make sure we weren’t getting a bad deal for the cost. It was satisfying to hear from our inspector that the house was even better than advertised. The inspector repeatedly told us how much of a deal we got and how great the condition of everything was.

We knew the construction company had ripped the house down to its studs, so it was peace of mind to learn from the inspector that he had absolutely no concerns with the work they did. Since the inspection went so well and we had already paid for this service, we ended up deciding not to spend $300 on a septic test thereafter.

By making a few calls to the town, we learned the septic had been replaced in September of that same year, and since it was so new it had hardly been used. It was smart to do this research to assure we were not being taken advantage of by spending money we did not need to spend.

4. I became more aware of my use of utilities.

When you’re renting, you probably don’t pay much attention to the amount of electricity you use or how high you turn the heat up (assuming your landlord covers certain utility bills). When you’re a homeowner, though, your mindset quickly changes.

I knew we needed to be a bit more mindful of habits like remembering to turn the heat down when we were out of town for a few days or conserving water by taking shorter showers. Sitting down and reviewing what utilities we need and how much we spend on said utilities really gave me perspective on my everyday habits.

I realized I do tend to use more electricity than I need to (e.g. turning on all the lights when one light will do, etc.) and quickly changed my practices. Being the person responsible for paying for utilities made me realize what I adjustments I could make to cut costs and be more mindful of my routine.

5. I learned a lot about being neighborly.

My childhood home was set in the woods of rural Maine in the middle of 24 acres of land. I had no clue who my neighbors were and didn’t spend time getting to know them. After moving out with Jacob, we lived in an apartment briefly and didn’t really know our neighbors, including the people living above us in our apartment building. After that, we sort of got acquainted with the neighbors in his first house, but again, didn’t spend much time chitchatting with them. Once we purchased our home, though, that all changed.

Our new neighbors made a point of coming by to welcome us into the neighborhood. It was nice to get to know who lived next door and across the street. We learned a lot about what our neighbors do for work, what kind of families they have (e.g. kids, pets, etc.), and we exchanged contact information.

Our neighbors always make a point to wave if we’re all outside, drop by for a quick chat, and even offer to look after our house if we’re out of town. Before being a homeowner, I didn’t spend much time caring to learn about the people who lived nearby. Looking back, I am a bit ashamed by the attitude I had. Neighbors can certainly be frustrating and nosy, depending on the type of people you live near. But, I do believe more often than not they just want peace of mind of who is moving into the area.

We learned a lot of useful information from our new neighbors, including how often our street experiences power outages, how the school systems are, where to shop nearby, etc. It was a nice change of pace to chitchat with the people near us to form new relationships and be neighborly.

Of all the things I have learned about buying my first house, I honestly believe the best lesson is that making this decision was the best thing I could have done for myself.

Sure, I have debt and that affects my ability to eat out as often as I’d like or travel the world. But, I have a home. I am my own “landlord”, if you will. I can put up a fence, park where I want, and let my dogs run all around without fear of upsetting anyone.

It’s scary to be in debt and scarier to look at the interest on a mortgage, but as long as we keep making extra payments and budget wisely, we’ll be building up our equity and have an asset of our own. The best part of this entire process has been building a future with my boyfriend and living the life we want for ourselves. I’m a twenty-seven-year-old homeowner and I wouldn’t change a thing about it!

When it comes to our career paths, it helps to look ahead.