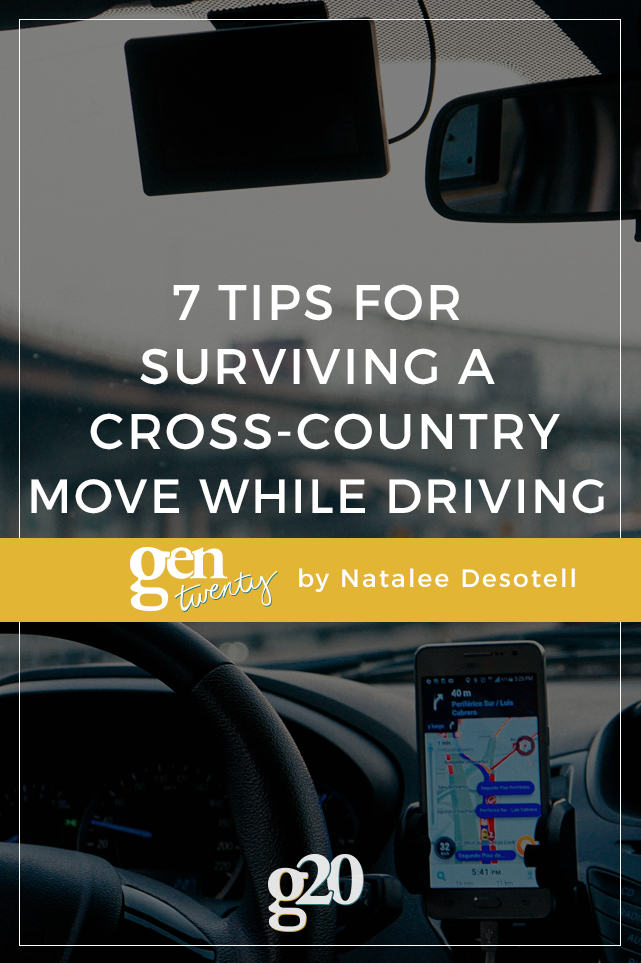 Last month, my husband and I embarked on a new adventure; we moved several states away from home. After scouring the internet for the best method to move our stuff from point A to point B, we determined the best way was the old-fashioned way: rent a moving truck and drive it ourselves.

We weren’t thrilled at the idea of the long drive, but significant planning made the whole trip go quite smoothly.

Here’s what we did.

First, we were bougie about the truck.

I booked a truck as soon as our moving date was locked in, but later I thought to check if the truck would have all the amenities I’d expect. Upon checking, I found there was no way to listen to music except for the AM/FM radio (no thanks), nor was there an outlet to charge our phones. Dealbreaker.

I was able to cancel for a full refund and switch companies; I’m so glad I did. We had air conditioning, an easily accessible outlet, and an AUX plugin, which is about as bougie as a moving truck gets in 2017. For our next move, I’ll only settle for a truck that can drive itself while brewing espresso.

Second, we planned ahead for tolls.

Before leaving, we knew which states we would be going through and how the toll prices differed for each one. Some required change and others could take cards; being prepared ahead of time meant we were never surprised at the cost of the tolls (although Ohio tolls are hella expensive in a moving truck).

READ MORE  How to Find a Job in Another State

We never had to scramble to get the exact change, either, because we stopped at our bank and got a few rolls of coins before leaving town.

Third, we planned our stops.

We split the drive into two days, each day with about 8 to 9 hours of driving each. In between, we stayed in a mid-point city (Cleveland, for us) to get a full night’s rest. I booked us at an Airbnb ahead of time so we didn’t need to find a place, nor did we have the option to weasel out and quit driving early on the first day.

We also planned extra time in our midpoint city to enjoy ourselves. For us, that meant getting a quintessentially Cleveland meal at Slyman’s Restaurant and dipping our toes in Lake Erie.

Even if you don’t have a long enough drive to stay overnight in a new city, leave a few hours open to explore a new place or two on your drive. You may never be through the area again.

Fourth, we downloaded music and podcasts.

Since cellular coverage varies across the country, you never know when you’ll happen upon a dead zone. We survived dead zones with pre-downloaded music and podcasts.

Although the music was current, it felt like a throwback to 2007 when we didn’t have a whole world of music at our fingertips and we could only listen to what was downloaded. In hindsight, we should have downloaded Crank That (Soulja Boy) to really capture the feeling.

READ MORE  5 Ways to Achieve Personal Growth in Your Twenties

Forget losing cell service, losing our charge would be even more of a tragedy. Our truck was equipped with an outlet, but we also brought a fully-charged portable battery in case the truck broke down and we were stranded. It didn’t happen, but we would have been just fine if it did.

Since our long drive also happened to be a long move far from home, it was an emotionally charged drive. There was a lot of excitement, of course, but we were also sad because each minute on the road meant we were getting one minute farther from family and friends. It was a lot to take in all at once.

We used the app to share our location in real time with family so they could see exactly where we were in our drive. We could also see when they checked the app, which was about every ten minutes. It was comforting to know that while we were thinking of them, they were thinking of us, too.

There was also a practical side to using the app; it gave my family peace of mind. They knew we were safe and still movin’ along without having to text us every ten minutes.

Lastly, lucky number seven: we were kind to each other.

Most importantly for a smooth ride, we agreed to be kind to each other. I suppose this one only applies to people traveling in pairs, but I’m including it anyway.

It’s inevitable: many hours in a vehicle will take a toll (pun intended) on your mood, but you don’t have to let it ruin the journey.

Key tips: Unless you’re in real danger, keep the driving criticisms to a minimum, only play music the other person likes, too, and please no unwelcome smells inside the vehicle.

If your irritability boileth over, take it out on other drivers. You’ll see cars with infuriating bumper stickers and people who must have forgotten what their turning signal is for. If you’re talking crap about other drivers to each other, then you aren’t talking crap at each other. This is a last resort. of course; try to stay positive.

Previous Post: « Is It Worth It? Fall 2017 FabFitFun Box Review
Next Post: 7 Ways Flowers Improve Your Wellbeing »

5 Lessons I Learned By Paying for College Myself

Graduating from college is a HUGE achievement, even if you have to pay for yourself.