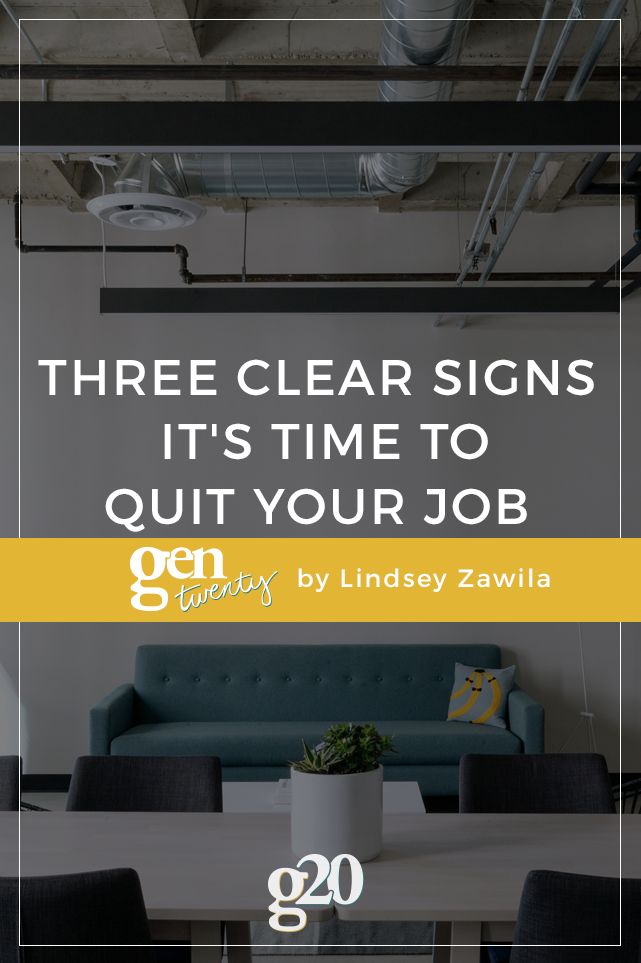 Very few people stay in the same career their entire lives, especially in our generation. I’ve been through so many fields and companies from internships to summer jobs and side jobs. Some have been amazing jobs that people can only dream of, and others have been simple jobs that people criticize. It would surprise many which have been my favorites and why, but I’ve learned a lot from moving from on industry to the next.

There’s much more to a job than simply the job itself. There are a number of factors that contribute to our satisfaction at a job, like our coworkers, the work environment, and the company. Likewise, a lot of factors will contribute to if and when you quit that job.

My general rule is to stay at a job for a month before passing judgment. A month is a decent amount of time to get used to the new job, the new atmosphere, and the new company. Afterwards, I’ll allow myself to pass judgment.

Here are some clear signs that tell me it’s definitely time to quit:

1. You Spend Your Days Dreaming Of Another Job/All You Want Is To Be Anywhere But There

There was one company I could not stand working for. It was a tiny public relations firm of three full-time employees and four interns. The company took more clients than they were allowed to, and the full-time employees were overworked, so we interns were just free labor and we were treated as such. The work wasn’t super exciting, though overall it was tolerable–while I didn’t love it, I didn’t hate it either.

The real problem was that I couldn’t respect the owner of the company because she was consistently rude to everyone on the team, including the full-time employees. She didn’t even know my name, which is especially sad because her company literally had seven employees–including herself.

Every day, during every free moment I had at work, I was searching online for other jobs. I desperately wanted to leave. I was tired at counting down the minutes to 5pm, ready to bolt for the door. Some days I would start my countdown at 9:30am. I started work at 9am.

That’s when I realized that if I was spending all my time at that job wishing I was elsewhere, I should probably just go elsewhere.

2. The Toll On Your Health/Sanity Is Too High

While bartending, one of my coworkers only worked weekends. During the week she had a day job working on building contracts or something similarly technical that probably paid more money and more consistently than the food industry. One day, she quit her day job. So I asked her what prompted her to do so. She said that she just couldn’t have another anxiety attack before work anymore. Fair enough.

In a way, every job will probably take a toll on your body. A desk job will hurt your back. Too much computer time will strain your eyes and put you at risk for carpal tunnel. More physical jobs are physically taxing in other ways.

But merely living takes a toll on our bodies. Overuse of smartphones can give us carpal tunnel. My back has suffered at desk jobs, and I’ve sprained my wrist moving heavy supplies in the food industry. I’ve even gotten hurt working at a bar from simply miscalculating and walking into the corner of the bar counter.

But I have also had those jobs where going into work in the morning was like going to jail. Others were so severe that the mere thought of that job would make me want to cry.

My health and sanity are extremely important to me. When I’m suffering mental breakdowns at the thought of going to work, it’s time to leave. For me, no job is worth my sanity. If your mind is screaming at you because of your job, you need to stop and listen. Then decide if your job is still worth it.

3. You Hate The Person Your Job Has Made You Become

I once had a retail job that promoted a strong “sales” culture. They had an expectation to greet all customers. Makes sense. After greeting them, we were expected to find out what they were shopping for. Then we were supposed to pile on several clothes from our store that might fit their needs. Afterwards, we would take them to the dressing rooms, and convince them to come out modeling the outfit. Then we would bring them twenty more articles of clothing, and so on.

That’s not an exaggeration–the quota was actually 20 more items. It didn’t matter if they wanted it or not, we were expected to give it to them anyway. These were manipulation techniques, and I hated myself every minute I worked there.

Seriously, I hated the wayI was forced to manipulate customers to sell clothes. It’s one thing when a company has different values than you, or if you don’t completely agree with the company’s policies, but outright hating yourself, who you are at that job, and actively going against your values is a very steep price to pay for a paycheck.

There was no amount of money that the store could’ve paid me to continue hating myself. A job that infringes on your values that severely is just not worth it.

I’m not saying that quitting is easy. I felt like I was going to hyperventilate when I quit my public relations internship, trying to find the most subtle and civil way to leave when I wanted to tell them that they were awful to work with.

I quit that retail job with a phone call. I went home and cried on my last day. I called the next morning and told them I wasn’t coming in anymore. I avoided that mall for months, and usually look away whenever I pass that store.

Quitting can be difficult. But in some cases, staying will be much worse in the long run.

3 Rules For Better Communication and Conversations

In order for a relationship to be happy and healthy, it takes nurturing and commitment and, you guessed it: communication.