The following is an excerpt from the book Wait, I’m Working with Who?!? by Peter Economy:

Every single one of us has exhibited some kind of minor bad behaviors at certain times throughout our careers, and it’s important for us to be understanding of others’ mistakes. It’s important to keep in mind that we as humans make a mistake every once in a while. We make the wrong decision, we misjudge a situation, we hurt someone’s feelings, and much more. There are ways to deal with bad behavior in the workplace.

My advice is to avoid stressing out or being overly critical about a coworker’s behavior unless it causes a significant, negative impact in the office. You should also avoid treating every bad behavior equally—bad behaviors have varying degrees of badness to them.

A lot of the time, these issues are minor. Choose your battles, and don’t sweat the small stuff. As the old saying goes, don’t make a mountain out of a molehill.

To assess the degree of bad behavior you’re presented with and figure out whether you should stress about it or not, there are five essential steps you must take. Go through these carefully and remember to maintain that 50,000-foot viewpoint.

It’s important that your emotions don’t get in the way of you being able to truly understand and assess the issue at hand. And keep in mind that other things in our lives—troubles at home, personal relationship issues, financial strain—may be stressing us out. 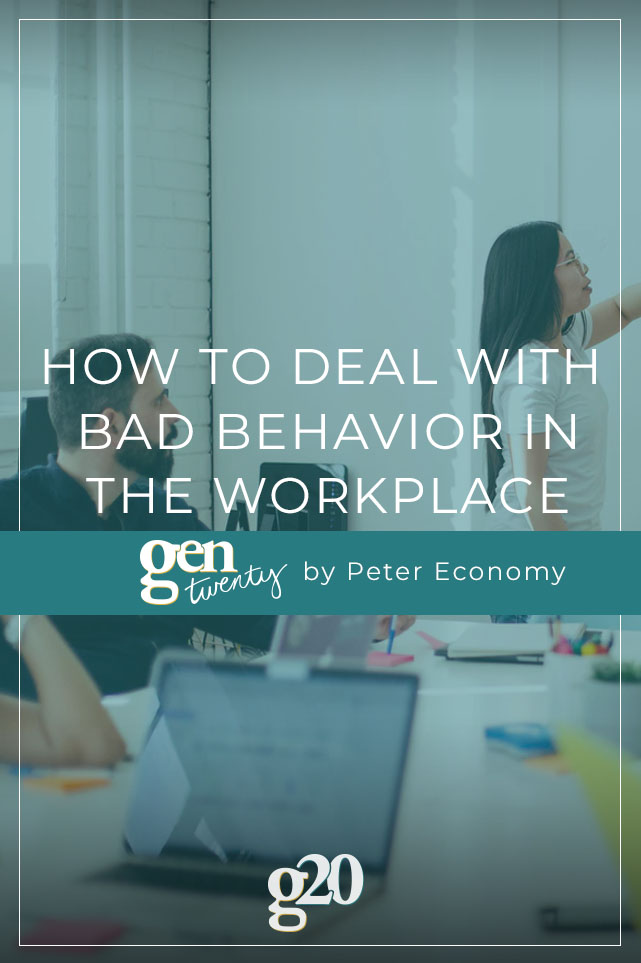 1. Exactly What Is The Bad Behavior?

The first thing you should do is take a close look at the behavior that seems toxic to you. Of course, it’s bad enough that your coworker is engaging in this particular behavior in the first place, but what exactly is the behavior and how bad is it?

Ask yourself questions that will help assess the level of “bad” that this behavior may be. Is it really that big of a deal? Why are you concerned about it? Is it having an impact on the organization, your team, or you personally?

Is the person regularly stopping by your desk during work hours and bugging you for half an hour to complain about something? If so, then that’s a big problem—for both of you.

While it may make your coworker feel better, it takes away from your productivity and maybe even some of your satisfaction at work. But if it’s an occurrence that happens just once in a while—say, in a public place in the office such as the lunchroom where they confide in you that they don’t particularly enjoy their job—then what’s the big deal?

If a coworker is infrequently exhibiting minor bad behavior and it isn’t taking away from your own productivity or making you feel emotions that directly and negatively affect your ability to work or overall well-being, then it might be best for you to simply try to ignore it. Sure, you may feel annoyed, but with minor issues such as these, chances are your irritation will pass if you just allow it to.

2. If It’s a Big Deal, Then Confront The Problem

The moment you realize that the conflict you’re dealing with at work is major, then you need to confront it. This means that the issue isn’t just a minor annoyance—it has instead negatively impacted your productivity and well-being at work, and it is something that you can’t and shouldn’t have to tolerate. The behavior may be against company rules—or it might even be illegal.

Ask yourself: What is the behavior? Is the behavior minor or major? For example, if you’ve overheard an employee threaten a coworker with physical harm, then that’s major and needs to be dealt with—immediately.

Maybe they say they are going to assault the coworker in the parking lot after work if they don’t do something that they want them to do. That’s obviously a big issue.

You should let your boss know right away and make sure that it’s addressed. Take some notes to document the incidents—what exactly happened and at what dates and times? Send or bring these notes to your boss so that it’s clear what the situation is.

If someone threatens you with harm, you should let your boss know right away. This is something that needs to be dealt with immediately—not only for your own personal safety, but also the safety of the rest of the office.

In the previous chapter, we talked about drawing a line in the sand that the toxic person is aware of, and if they cross that line, there will be consequences. This is a perfect approach for major issues that rise above the level of mere annoyance. If the behavior becomes major, then it is something that you need to deal with—your coworker has crossed the line in the sand that you drew.

If your boss doesn’t take your concerns seriously or does not act on them quickly or decisively, then you may need to go over their head—taking your concerns to your HR department or going to your boss’s boss. While this may not make your boss very happy, you’ll need to take action to ensure that the bad behavior is stopped. And if it’s your boss that’s doing the harassing, this puts you in an even more difficult situation.

Most companies have policies in place for reporting workplace sexual and other forms of harassment, whether it’s instigated by your boss, your coworkers, or even customers or vendors. Be sure to follow your company’s policies, which likely include documenting the harassment and filing a formal complaint.

If you’ve filed a complaint and no action is taken, then your company may be legally liable for allowing the harassment to continue. In that case, you may want to talk with a lawyer to see what your legal options are, or you may decide to look for a new job elsewhere.

Whatever you decide, don’t allow this bad behavior to continue. You have the power to stop it and you should use it.

3. If It’s a Little Deal, Then Try To Ignore It

If the issue is something that’s not a big deal, then do your best to ignore it. There are several ways to help restrain yourself from turning a small issue into a big deal. Tuning it out is one option. You can choose to simply ignore their words or actions, excuse yourself, and walk away from the encounter.

This isn’t always possible in certain instances, however. If the person is wandering into your office or workspace, annoying you, and taking up your time over something that isn’t worth it, politely ask them to please take it elsewhere. Tell them that you have work to do and you need to focus on it, and that you really don’t have time to listen to them complain about their problems.

Don’t be shy to tell someone that you’re busy and need to focus on your work. It’s important that your productivity isn’t altered by this person, regardless of who it may be—even your boss, or your boss’s boss.

4. Focus On The Positive

Everybody has positives and negatives, and everybody has pluses and minuses. There are good aspects of people’s personalities, and there are bad aspects as well.

My suggestion is that you try to focus on the positive and find the positive things in the other person instead of looking at the negative. Sure, there may be some negatives that are a part of the person’s overall package, but there are also probably a lot of positives that you enjoy. The person may be funny and keep the office light and happy.

They may be an extremely productive worker with great customer service skills and customers love them. Maybe they’re even the best barbecue cook at the company picnic every year.

Whatever that positive is—being a great chef, being great with customers, being funny—focus on that positive as opposed to the negative attributes they may have. Look at the person as a whole, rather than fixating on a small part of them. Again, don’t sweat it if it’s not a big deal that is consistently impacting your productivity at work or mental well-being.

Consider that if you’re obsessing over someone’s minor, occasional toxic behaviors and you’re ignoring the major positive behaviors, maybe it’s you who needs a change in perspective. If you are nitpicking over small details of someone’s personality, that’s not a good thing and it can be toxic to other coworkers. Maybe by actively changing your perspective, and deciding to stop worrying about it, everything will turn out okay. Maybe the workplace will be a better place for everyone—including you.

Changing your perspective will allow you a clearer viewpoint on the situation and your coworker. You may even realize things about yourself that you are able to work on in order to better yourself, and your relationships with others.

Peter Economy is a best-selling business author, ghostwriter, developmental editor, and publishing consultant with more than 80 books to his credit (with more than 2 million copies sold), including Everything I Learned About Life I Learned in Dance Class by Abby Lee Miller, Leading Through Uncertainty: How Umpqua Bank Emerged from the Great Recession Better and Stronger than Ever by Ray Davis, Managing For Dummies, Leadership Ensemble: Lessons in Collaborative Management from the World’s Only Conductorless Orchestra, The Management Bible, and many more.

READ MORE  Working In a Toxic Workplace? Here's What To Do

Adapted, and reprinted with permission from Career Press, an imprint of Red Wheel/Weiser LLC, Wait, I’m Working with Who?!? by Peter Economy is available wherever books and ebooks are sold or directly from the publisher at www.redwheelweiser.com or 800–423–7087.

Previous Post: « 5 Things to Talk About with Your Partner When You Think About Becoming Parents
Next Post: 50 Hard Questions To Ask Yourself If You Want To Reach Your Goals »

Here are a few actionable tips for staying neutral and learning to avoid conflicts.