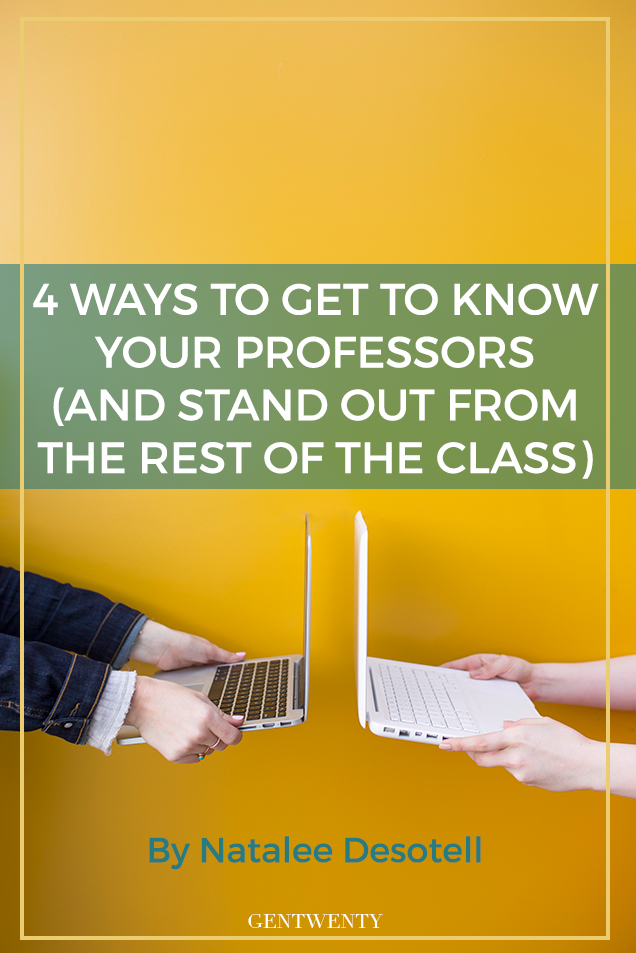 Unless you’re at a small university where classes are cozy and professors actually learn their students’ names, it may be difficult to take full advantage of one of your most important assets for surviving college and succeeding afterwards: your professors.

Through guidance or shining letters of recommendation, professors can help you jump the hurdles to get into graduate school or to get your foot in the door of your first job after college. If you want to get the most out of your years in school, building a positive relationship with one or two of your professors each semester ought to be on your to-do list.

Here are a few tactics to use to get to know your professors:

No, you don’t need to receive perfect grades to be a good student. In my opinion, being a good student means that you’re making a genuine effort to learn the material.

First, show them that you’re taking your studies seriously by introducing yourself to them in the first week. I usually also include why I’ve chosen their class and what I’m looking forward to most.

Next, read the syllabus thoroughly and follow their rules to a T. They know that you’ve made it to college and therefore they know you can read, so most professors have little tolerance for students who fail to familiarize themselves with the rules of the classroom.

Further, you should always go to class — extra points if you sit up front so they always see that you’re there.

2. Know that they want to talk to you.

For these reasons, it’s safe to assume that they probably appreciate it when you show up to their office. That’s not to say there aren’t some crotchety old professors who seem to hate their students.  Not everyone can be Mr. Feeny.

When you’re planning to talk with a professor, it’s best to be prepared.  If you have a question on an assignment, make sure you’ve actually attempted the assignment and completed the necessary reading and prep work. This one is hopefully obvious, but I can’t even count the number of times I’ve heard my classmates ask questions that could have been easily answered by doing the assigned reading.

Don’t embarrass yourself by making that mistake. Next, if you’re interested in discussing their research, take some time to skim at least one of their publications and their CV. They’ll be impressed if you’re familiar with their colleagues and their research.

In my experience, professors always appreciate it when a student is prepared for the conversation.

This may be the most important step in the process. It’s very helpful to them if you stay in touch, especially if you plan to request a letter of recommendation a few years down the road.

I start by sending a thoughtful thank-you to a professor after grades have been posted (no one likes a brown-noser) to show my appreciation for taking time to chat with me.

Later, I contact them every once in awhile to remind them that I exist and to show that I’m still interested in the subject.  Sometimes I send them links to interesting articles that might be relevant for their class. Other times, I send a note to let them know what I’m doing and how their advising helped me get there.

Don’t go overboard, though; a professor isn’t likely to write a great letter of recommendation for their stalker. One note about every six to nine months is plenty to keep you fresh in their mind.

Getting to know your professors is one of the most important networking opportunities that you have in college. Follow these steps and you’ll find that knowing your professors will open many doors for you, inside and outside the classroom.

Your health, your hands: What to ask your doctor at your annual check-up

As a woman, monitoring your health should be a top priority. Knowing what to do, say and ask at an...