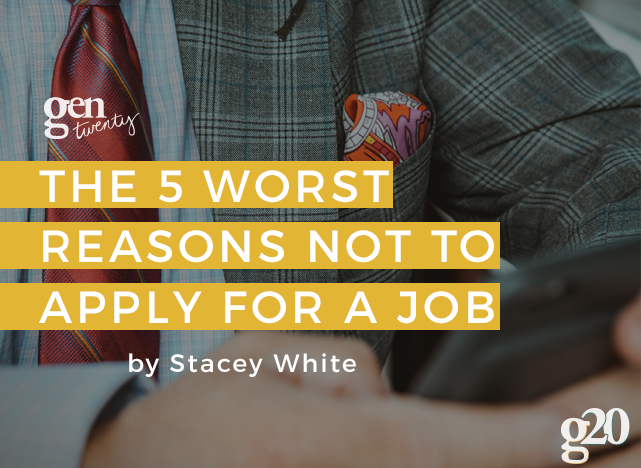 You’re browsing through job listings when, finally, you see something that might work. The pay is right. The hours are right. You meet all of the criteria that they expect from applicants.

Yet somehow, you still hold back, hesitating about whether or not to apply for the role.

The above is a scenario that it’s all too easy to find yourself in. With the thousands of jobs available to search on a daily basis, it can be tough to convince yourself to actually go ahead and submit an application. Some of those reasons might be entirely justifiable. It might be too long a commute, or a role that isn’t going to progress your career in any meaningful way– those are the valid reasons.

Then there are the… let’s say, the less than valid reasons. The “reasons” that are actually closer to being “excuses.” You can convince yourself that these not-really-reasons actually are reasons, but the truth may be distant from that. If the only thing holding you back from applying for a job is one of the below “reasons”, you might want to reassess your priorities.

1. You Secretly Think The Job Is Beneath You

Don’t feel bad about this; it’s not snobbish, it’s not a sign that you’re a terrible human being. It’s inevitable. There are certain jobs that are maligned by society, almost dismissed as a joke; you might not like the idea of working in these occupations. It’s this attitude that might keep you from applying for a customer service position or hesitating over sending your Olive Garden application on jobapplicationcenter.com. Sure, you’re in need of cash, but you just can’t quite see yourself doing that job.

Here’s the thing: you might surprise yourself with how much you enjoy these oft-scorned roles. Many people work in so-called low quality jobs and genuinely enjoy it; how can you know you won’t have the same experience?

2. You’re Hoping Something Better Will Come Along

This is a trap that it’s easy enough to fall into, but it’s a false one that has a very simple answer: where’s the harm?

If you go through a recruitment process and then spot a better job that you would rather do, then you’re not obliged to go and work for the first company– you can back out and apply for the job you would prefer. Going through an application isn’t going to harm you.

3. You Have Worked In The Industry Before (And Hated It)

4. You Don’t Think The Pay Is Sufficient For Your Skills

Whether the above is a reason or an excuse depends on your circumstances. If you’re already in a job, then being concerned about the pay scale of a new job is probably a valid reason.

However, if you’re unemployed and thus currently earning zero, something is still going to be better than nothing. Chances are your real concern is deeper than the pay, so it might be worth thinking about what is truly holding you back from applying.

Except for in a few, very select cases, assuming things without factual backup for your assumption tends to be a bad thing, as detailed on hanofharmony.com. Sure, you might think you will dislike the job, but how can you be so very sure without trying it? Assumptions could hold you back from a job that you would actually find enjoyable. You might get to your first day on the job, realize you love it, and wonder what you ever thought was such a big deal.

On the flip side, if you do dislike the job as much as you anticipated, then at least you have given it a fair chance. You don’t have to stay in a job you dislike, so if it doesn’t pan out, then you can move on– assured that you at least tried something rather than second-guessing an option in front of you.

It’s natural to make excuses as to why you don’t want to work in a particular job, even if you’re short on cash and in need of employment as soon as possible. However, if you’re going to make the money you need, then facing down those excuses and applying anyway might just be the best thing you have ever done.

READ MORE  Nine Life Rules You Don't Realize Are Stupid Until You're in Your 20s
Previous Post: « TED Talks That Changed My Life
Next Post: How to Make Someone’s Day Without Spending a Dime »