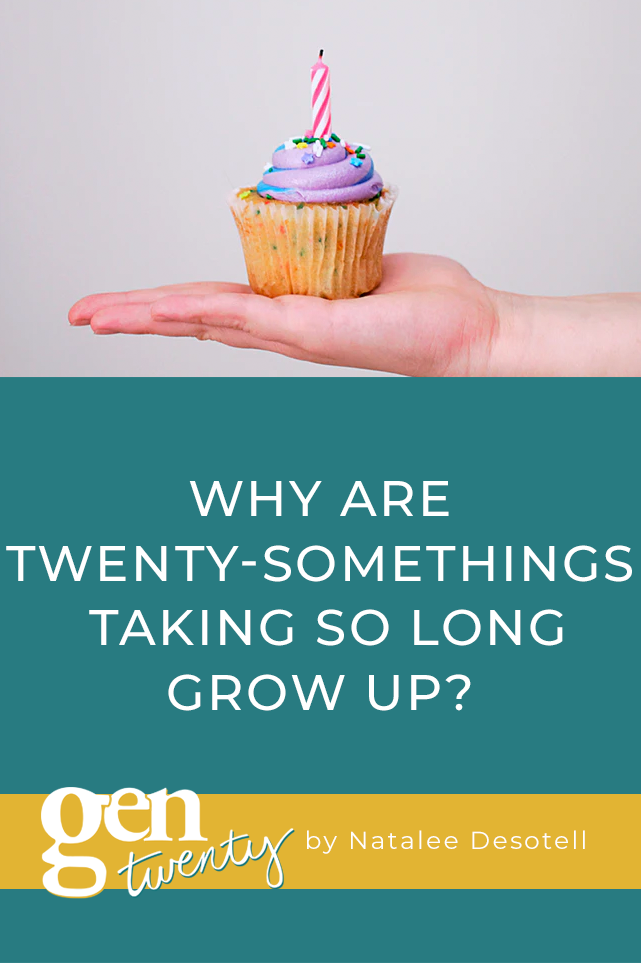 Back in middle school, when we had notebooks filled with scribbled games of M-A-S-H, many of us made the assumption that our lives would take a certain familiar shape.

After college, we’d find a great job, get hitched, buy our dream house and have a kid or two. Now that we’ve reached our twenties, though, many of us are realizing that this one-size-fits-all life model isn’t in the cards for all of us. What gives?

So… why are twenty-somethings taking so long to grow up?

Workin’ for a livin’

Unless you’ve been living under a rock since 2007, you know the recession has taken a toll on twenty-somethings.

A recent study shows that nearly half of recent grads have jobs that don’t use their earned degrees. After buying into the notion that a degree is a guaranteed ticket to a great job, waiting tables after graduation feels like failure. If that’s the situation you’re in, you aren’t alone! Just remember that every job provides you with some useful experience, even if it doesn’t feel like it, and it’s better to have a fast food gig on your resumé than a big gap of unemployment after college.

Some are also turning to volunteer work and independent travel to gain experience before snagging the perfect job or heading off to grad school. In any case, the days of landing your dream job fresh out of college are over.

READ MORE  Work flow: Whether your day ends at five p.m. or not is up to you

Little boxes on the hillside

Malvina Reynolds’ 1962 song “Little Boxes” (maybe you know it from Weeds) exemplifies the convention of buying a house in suburbia after graduation.

Just like a “guaranteed” job after college, this now feels like a relic from a simpler time. One explanation is the fact that our generation witnessed the housing bust.

Homeownership used to be a no-brainer way to build equity, but it’s no longer trusted as such a safe investment. Despite this being a great time to buy, many of us aren’t willing to make a big investment for fear of having the rug pulled out from under us.

On top of that, owning a home is a major commitment that seriously limits mobility. It’s much easier to let a lease run its course than to worry about selling a house, and we need to be mobile in case a great job opportunity opens up across the country. Not to mention, who wants to be responsible for maintaining a house? I’m happy to have a maintenance person on call, thank you very much!

Unsurprisingly, fewer people are rushing to the altar these days.

The biggest decline in marriage rates is happening for those of us between age 18 to 29; only 20 percent are married now, down from 59 percent in 1960! This is likely related to the delay in finding stable jobs and mounting student debt; we simply can’t afford to throw the celebration we want, so why do it now?

READ MORE  We can’t all be Peter Pan, but we can try: Growing up without growing up too much

Another reason is we’re generally less interested in the legal institution of marriage. It’s not necessary to recite vows before moving in together, so we don’t feel as pressured to tie the knot.

… then comes the baby in the baby carriage

Similarly, we’re also having kids later. A DailyMail article showed many women who graduate from college are waiting until about 35 before having their first child.

Maybe this is because it seems natural to wait for the stable job, house and marriage to fall into place before adding kids to the mix. However, there’s also an aspect of wanting to bask in our independent twenties. Children are a huge commitment that many of us are not willing to take on just yet. Personally, I’m looking forward to having a few selfish years left to travel and explore new hobbies!

The moral of the story is this: try not to measure your life against your parents’ or your peers’ lives but against your own goals.

Today, milestones are less about the “natural order” of things and more about you as an individual. Maybe you’re on track to hit all the major milestones before your 30th birthday. If so, great! But if you’re going to take a bit longer to check everything off the list, or if you aren’t interested in checking all of them off at all, then that’s great, too. Milestones should be personal to you…it’s not a competition!

READ MORE  Moving Into Your First Place: What You Need to Know, Do, and Avoid
Milestones are personal… life is not a competition!

Comment below and tell us about your experiences as a twenty-something! Are your milestones delayed, are you right on track, or are you not interested in hitting all of the traditional milestones at all?

Previous Post: « Embrace the green: Ways to be ecologically conscious in life
Next Post: Kitchen Essentials: What You Need and What You Don’t For Your First Home »

Save, Save, Spend: How to Keep Your Money in Your Pocket

As twenty-somethings, most of us don’t have a lot of experience really managing money.