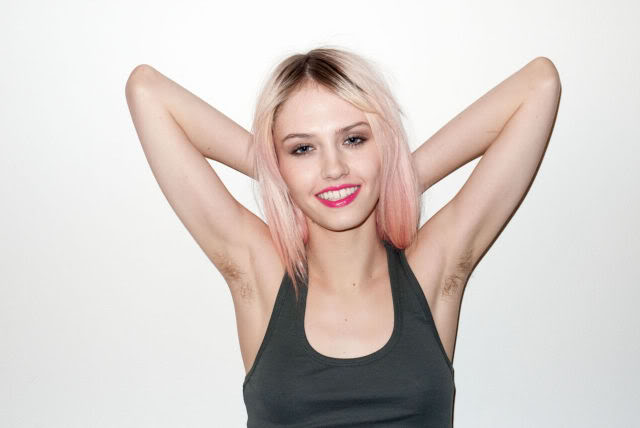 When was the last time you thought critically about your pit hair? If you’re anything like me, I’m guessing you mindlessly put a razor to it a few times a week as you mentally plan the day ahead. It’s just another monotonous task on the morning to-do list. The same goes for your legs and the other parts in between, probably. If you pay any attention to the ads for razors, shaving creams, or laser hair removal services, you’ll quickly be reminded that body hair is “unsightly” or that your legs are considered “touchable” only if you drag a sharp blade over them first.  This is nothing you haven’t heard before, though, because this knowledge has been ingrained in us since we saw our first Nair commercial. We all learned from an early age that, like taxes and death, hair removal is just another unavoidable fact of life.Evolutionarily, we have body hair to regulate body temperature, for protection from the sun and for sexual attraction (hair amplifies the scent of those attractive pheromones). Historically and geographically, hair removal rituals vary. In United States history, it’s actually a relatively recent phenomenon; the more skin-baring women’s apparel of the 1920s resulted in an avalanche of new products for women to tame their bodies, including: makeup, the bra, dieting, and yes, hair removal.

Resistance to remove body hair has been used as a political statement by feminists for decades. Some twenty-somethings may remember the Julia Roberts pit-hair fiasco of 1999. Today, there is no shortage of women on blogging sites like Tumblr brazenly displaying their body hair and their own brand of beauty in the name of feminism, body positivity, and not giving a damn. A Tumblog about one woman’s quest to grow out her body hair has even gone viral (warning: some NSFW images). It’s becoming a wider conversation, not only for self-proclaimed feminists, but for all women who wonder why the heck they are spending so much time and money on such a meaningless task. We ain’t nothing but mammals, after all.

Despite the huge support for a body hair revolution, though, there are still those who are downright disgusted at the thought of a woman relinquishing the razor.

Want to be a part of the re-emerging body hair revolution? It comes down to this, twenty-somethings: What do you prefer? Are you tired of a life of itchy razor burn? Then give your skin a break and see how the natural life feels. On the contrary, if you love the feeling of being smooth all over, then keep doing your thing. It’s actually that simple.

Are you in the habit if getting rid of your so-called “unsightly” hair, or do you rock it proudly? Tell us in the comments below!

Previous Post: « What happened when I got cold feet
Next Post: Dressing up your winter wardrobe in style »

Sex Partners: Is There a Perfect Number?

Women are being criticized more and more for the choices they make in their lives. From weight to fashion to...