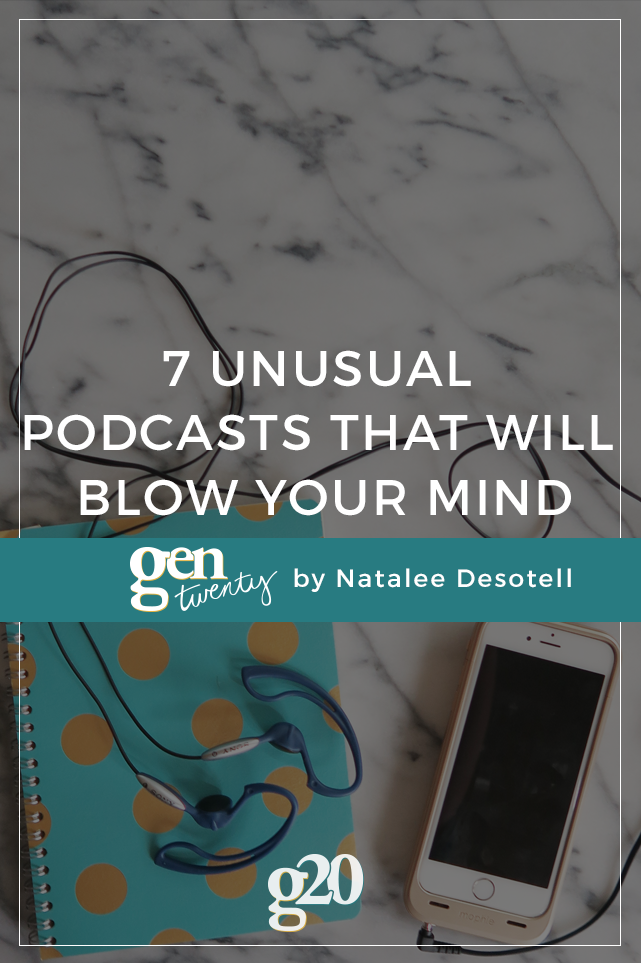 Something about podcasts feels a little quaint – in part because some of my favorites are actually old radio shows from the 1990s (“This American Life” started in 1995) and also because the whole concept is reminiscent of the “serials” I imagine my grandma listened to on an old-timey radio back in 1930-something.

There’s nothing old fashioned about podcasts, though, as they often cover real societal issues we’re facing today, discuss groundbreaking science, or explore the minutia of our everyday lives.

I assume you are familiar with “This American Life,” “Serial,” “Stuff You Should Know,” and the like, so I won’t be going over those. If you’d like a run-down of the essentials, check out TIME‘s list of top podcasts for 2015.

If you’ve already listened to the entire libraries of the most popular podcasts, these are the shows you should tap into next.

This show is all about women in the workplace. It is not afraid to delve into often uncomfortable topics like how the decision not to have children affects a woman’s career, and sexual harassment and how not okay it is to be called “sweetie” by your boss.

One of their recent shows looked at the generation gap between millennial women and older women in the workplace. It’s pretty cool to hear a whole podcast dedicated to women talking about women’s interactions with other women. Needless to say, this podcast passes the Bechdel test with flying colors.

Episodes are about twenty minutes long and they come out every two weeks.

I love @ashleymilnetyte and The Broad Experience Podcast

This show is about the stuff we tend not to think about, like how the systems and structures around us shape our lives.

A recent show talked about wildlife, but not just any wildlife – it focused on the animals that live in our cities. If you have any interest in finding out why we have so many city-dwelling pigeons and why so many of them have jacked up legs, then this just might be the podcast for you.

READ MORE  We All Have a Purpose: How I Discovered My Vocation

Episodes come out weekly and hover around twenty to thirty minutes each.

Their first season was a serialized look at life after graduation, including the search for a job and the frightening business of making hard decisions and having no money. The second season is a change in direction, now looking outward at how other millennials are navigating their twenties.

One of the episodes that resonated the most with me was “The NYC Fairy Tale,” which is about the ups and downs of trying to secure a dream job in a dream city. It inspired me to set my fear of failure aside –when vying for a job, sending a Big Deal email, or applying to graduate school — and JFDI.

They were recently picked up by Radiotopia, which is huge news for them and inspiration for us to keep working at what makes us happy.

Their episodes come out about every three weeks and are around twenty to thirty minutes.

I love the Millennial @millennialpdcst

Criminal is a podcast that covers the crimes we often do not hear about on prime time television. They cover stories about flipping the bird (asking the extent to which this is really a crime), a 1965 murder possibly solved by some accountants, and what happened when an eighth grade student brought a gun to school in Hastings, Minnesota.

One of my favorite episodes so far was about a bourbon with the strange name “Pappy Van Winkle” made in Kentucky that is nearly impossible to get your hands on. Often, it doesn’t even matter how much money you are willing to sell out. Sorry, Kanye. In this instance you are not special. To get a sip of what must be the most incredible bourbon ever created, you either need to get extremely lucky or break the law.

READ MORE  How To Develop a Strong Sense of Self

Episodes are about twenty minutes long and are produced every two weeks.

I love the Criminal Podcast @CriminalShow

Each show starts with an anonymous question asked by someone who just isn’t sure if [insert any topic here] is racist. The answer is typically yes. I mean, if you have to ask if something is racist or offensive, it probably is. But sometimes it’s more complicated than a simple yes or no.

The discussion that follows the answer (or lack of clear answer) is the most interesting and enlightening part. The podcast is important for everyone, but particularly for white people who don’t have the lived experiences to know what is offensive and what is not (read: all white people). Each short episode will help you see a perspective that you might not have seen before.

Episodes are about ten to fifteen minutes and come out every weekday.

I love @earwolf and learning from the Yo, Is This Racist Podcast

You probably already know that Neil Degrasse Tyson is the most undeniably cool man in the universe (sorry again, Kanye). He is famous for making the complex world of astrophysics accessible to laypeople (and also for his hilarious tweets).

No topic in the cosmos is off-limits, and along with always-hilarious guests, he answers any and all listener questions. Sometimes he even has Bill Nye on the show for a one-two punch of stupefying brilliance. Its healthy mix of science and comedy is downright stellar. Pun definitely intended.

The weekly episodes are quite lengthy at around an hour each.

Embedded’s tagline is that it “takes a story from the news and goes deep”, and that it does. It has covered stories about what happens to once NBA-hopefuls who were not drafted or the why the police in LA’s notorious skid row are inconsistent with their ticketing and arrest practices.

My favorite episode is about a town in Indiana that is gripped with an unprecedented HIV outbreak because of the rising intravenous use of the prescription drug Opana, an opioid with similar properties to heroin. Embedded follows the entwined stories of the addicts in this small town, including a nurse-turned-addict and a young couple who vow to get clean for their child.

Episodes are about thirty minutes long and are produced weekly.

I love the Embedded Podcast from @NPR

Do you love a lesser-known podcast? Leave it in the comments. We’d love to listen.

Know someone who loves podcasts? Share this with them:

I think you’ll love these 7 podcasts!

Previous Post: « Why I (Sometimes) Regret Learning A Second Language
Next Post: How To Encourage Your Friends & Family to #BeGreatOutThere »

Why I (Sometimes) Regret Learning A Second Language

Could learning a second language ever be a bad thing?