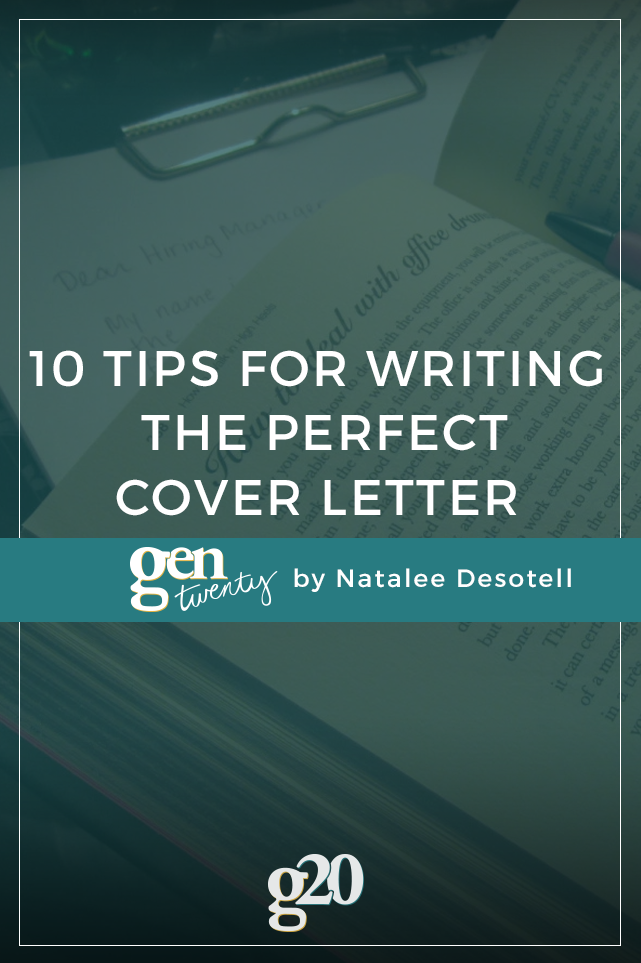 While a résumé is meant to tell an employer about your qualifications in list form, a cover letter is there to show how you are the best applicant in the bunch. It’s meant to complement and introduce your résumé, not repeat it.

Here, we will cover 10 tips for writing the perfect cover letter:

1. Don’t address your letter to “To Whom it May Concern.”

Your cover letter isn’t a doctor’s note, so don’t address it like one.  Take the time to find the name of the person who will be reading your letter, either by snooping on the company website or by directly calling the company to ask for a name (pro-tip: don’t forget to get the correct spelling).  If you cannot find a name, then you can use “Hiring Manager” as an absolute last resort.

2. Do get their attention.

Remember the obligatory attention-getter from your middle school essays?  Hiring managers read so many dull letters each day that they all begin to look the same; give them a reason to pay attention to yours. For example, begin with an interesting personal anecdote about that time you took initiative in a difficult situation.

It’s best to tweak each letter to fit each unique position.  Employers want to read a letter that’s specifically tailored to the job they’re hiring for, not a cookie-cutter letter that only vaguely relates to the job responsibilities.

4. Do focus on quality, not quantity.

Again, hiring managers are sifting through hundreds of (mostly) boring letters.  You don’t want them to look at yours and think “ugh, another novel.” Your letter should be concise, well-written and memorable.  Half to three-quarters of a page is plenty.

5. Don’t bother with the thesaurus.

Your college professors might have been impressed by gaudy language, but hiring managers generally are not.  Stick to vocabulary that you would actually use in a job interview.  But like, don’t overcompensate by being overly colloquial, dude.

Even if you’re a grammar geek who can out-spell any Scripps champion, now is the time to swallow that pride.  Get as many extra eyes on your résumé as possible: family, friends, professors, a campus career advisor, etc.  The more people who critique your work, the better it’ll be.  Nothing says, “I’m not the person for the job,” like a cover letter that uses the wrong “your”.

When applying for a competitive job, you might feel like you want to inflate the truth to outshine other candidates.  This is a major mistake.  If you only remember enough from your high school Spanish class to ask, “¿Dónde está el baño?,” then you don’t speak Spanish and it doesn’t belong anywhere in your application.  Lo siento, hombre.

8. Do focus on what you bring to the table.

An obvious, but overlooked aspect of job-seeking (especially for those of us just coming out of the “the world revolves around me” phase) is the fact that employers don’t care if you’ve dreamed of working as a pediatric nurse since you were five.  Hiring managers aren’t in the business of making childhood dreams come true; focus on what you can do for them rather than what they can do for you.

The end of your letter should be an open invitation for them to get in touch with you, but you should also clearly state what your next actions will be.  For example, end by thanking them for reviewing your application and by promising that you will follow up with a call within the next two weeks (and then actually follow up).  This shows that you’re the type to take action.

If you’re so worried about writing the perfect letter that you can barely manage to get words on the page, get this: worrying is a good sign.  It shows that you’re the type who cares about the quality of your work.  The fact that you’re reading this article means you’re the type to do research before blindly starting a challenging project.  If you wrote three drafts and deleted them all before writing the final draft, it means that you know how to critique yourself and learn from your mistakes.  Isn’t that precisely what employers are looking for?  Just don’t let the worrying get in the way of actually finishing a draft and submitting it.  Employers also want someone who can be decisive.

Although you’ll inevitably have some applications that are met with zero interest, some of them will result in an interview.  Be sure you’re prepared for the interview and for surviving in a new workplace by reading some of our other career-focused articles.

READ MORE  How a Set of Brain Games Will Help You Find Your Next Job
Previous Post: « Why I keep a diary (and why you should too)
Next Post: Cheap and Chic Home Decorating Ideas »

How To Stand Out From Your Co-Workers

Standing out--and for the right reasons--can be especially difficult in the modern day, competitive workplace.