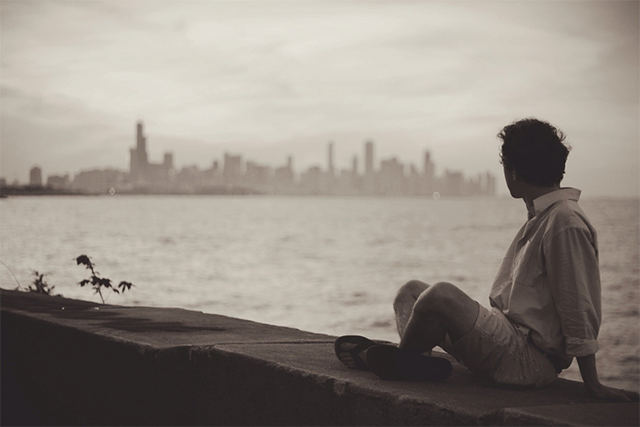 Blue and red lights flickered off the church across the street.  If it hadn’t been in small town Kentucky, I would have thought it was the red light district of Amsterdam. The officer escorted my father to the car in handcuffs.

“Are you Ray?”  The officer had asked.

With a subtle vibration of nervousness the officer replied.  “I have a warrant for your arrest for forgery of a prescription.”

My father put his hands on his hips and exhaled deeply.  He looked at the ground and then started to look at me, but glanced away.  “Okay.”  He finally said.

The officer grabbed my father by the arm and began to explain what rights he had. The click of the handcuffs is burned in my memory. The shame and bewilderment of watching something happen you don’t understand are ever-present.

I was 17 when they drove him away in the back of the car, and when he left for in-patient rehab to curb his dependency on narcotic painkillers.

My father had a terrible motorcycle accident the year I was born.It left him with a broken and brittle left ankle.  Seven surgeries and physical therapy did little more than dull the pain. Painkillers let him work, and without work he couldn’t feed my sister and me.

But one day his doctor unexpectedly cut his dose in half, and out of desperation he stole a prescription pad. Two months worth of fake prescriptions is enough to send you to jail. And send him to jail it did.

In the most impressionable years of my life, my role model was carted away in a police car.

We had just spent several hours cleaning out our garage to create a workspace. Dad was going to start his own business, a plumbing company of his own. He needed it and I needed him to be happy.

What It All Means

Dad was always a little off balance, emotionally struggling with divorce and drug addiction. To this day I think it was shame that kept him trapped. It’s easy to say, screw it, when you know you can’t escape the shame.

I watched him make the same mistakes over and over again throughout my childhood, and even into my late teens. He couldn’t seem to find his footing. But watching him as I did, I learned many things. I learned which stepping stones would fall into a sink hole. I learned what it meant to grow up quick. To look at the world through the eyes of a cynic, because it was easier that way. It saved a lot of disappointment. I learned what it’s like to tell your dad he needs to make a change, and make it fast. I learned what it was like to be a father, before I ever had a child.

I learned life backwards. But I’m a survivor because of his example. When you learn life backwards the difficult part is learning how to trust people. How to give your heart to someone without fear of it being ripped away. It also develops a sense of appreciation for all that is good in the world.

It’s widely known one can learn from a bad example more so than a good example. Failure is the ultimate teaching tool, and I’m not unique to learning from failures of role models. Our generation has seen a fair share of failures. We have the resources to study them, and learn from them. Our homes were not all built on a strong foundation of two parents as generations before (the statistics are staggering, and rising each year).

We know if we don’t understand and learn from other’s failures we can’t succeed. Seth Godin says “The Factory” is dead, and he’s right. We must seize our opportunities in front of us, take what we have seen others fail at, and do the opposite, or we will fail. And because we are survivors, failure is not an option.

We are survivors because we have to be.

Life always tends to throw us curveballs when we least expect it. As soon as we think life has settled down,...